Look, if you’ve seen even…ten minutes of any Community episode, ever, you probably know that it is a TV show that likes to poke fun at the fact that it is a TV show, playing with themes and tropes and occasionally throwing that out and just winking to the audience. While it can all get kind of overbearing, it also affords a pretty good look into the mindset of the show’s creators at the time—mostly, mastermind/possible crazy person Dan Harmon.

So if you watched the finale of season five, the last season to air on NBC before the show’s move to Yahoo Screen, you got the sense that it was definitely a finale, but an optimistic one. They joked about the uncertainty of coming back, to NBC or anywhere, but there was definitely an underlying feeling that in the end, Community wasn’t actually going to end. And then, it did. NBC cancelled Community.

When little-know streaming service Yahoo Screen picked Community up for a sixth season, no one knew if it would be worth it. The show hadn’t exactly reached the peaks of it’s first two seasons in a while, and does everyone remember Netflix’s Arrested Development? Was a sixth season of Community even needed? Well, I don’t know about “necessary,” but man Community‘s sixth season has been one of its best.

Its latest episode, “Emotional Consequences of Broadcast Television,” is the sixth season finale, but with zero to none being said about a seventh season, it effectively for now is a series finale. And unlike season five, there isn’t that undercurrent of “we’ll totally be back.” No, as Elroy, Annie, and Abed all say, there is only “probably…maybe…” This is Dan Harmon and his character’s coming to terms with a real goodbye, and it makes for one satisfying conclusion.

“Emotional Consequences” centers on the crew—or, what you could call the crew “at this point,” minus Chevy Chase or Donald Glover or Yvette Nicole Brown— pitching their ideas for season seven of Community, because of course they are.

Let’s stop here and say Chang’s Ice Cube Head pitch is not something I want. It’s something I need.

What was perfect about the pitching narrative, besides the fact that it was classic Community, is that each and every one was so perfectly tailored to the mind of the person pitching. Britta’s depressing, world issue solving variety, Frankie’s inability to come up with anything amusing past a fart joke, the Dean’s pitch being called “crazy and racist and terrible.” (but seriously, the first of many times I laughted out loud was when the Dean, in an attempt to not seem racist, placed an unnamed, un-speaking black character in the back of his pitch. And hey Shirley!)

And Abed’s description of TV, I will admit as a TV critic who watches more than can be considered humanly reasonable, is pitch-fucking-perfect:

TV defeats its own purpose when it’s pushing an agenda, or trying to defeat other TV, or being proud or ashamed of itself for existing. It’s TV. It’s comfort. It’s a friend you know so well and for so long you just let it be with you. And its needs to be okay for it to have a bad day, or phone in a day. And it needs to be O.K. to get on a boat with LeVar Burton one day and never come back.

That last part, with nary a Troy appearance in sight, killed me.

Then there’s Jeff, who is forced to look at a season seven where he is the only mainstay at Greendale, with Annie getting an internship with the FBI and Abed taking a PA position on a FOX show in LA. This season, this episode, and possibly this show ends with Jeff coming to two conclusions. 1) It is in fact okay to move on, and “probably, maybe” things will be back to normal one day and 2) Marvel movies are “so not a big deal.”

Only one of those lessons is correct, by the way.

And so the Greendale study group, or whatever is left of them after six uncertain seasons, embraces in the study room to the tune of Chang admitting he’s “legit gay,” possibly and satisfyingly for the last time.

Special attention must be paid to the extra scene of “Emotional Consequences,” a commercial for Community: The Board Game. Nothing, and I mean nothing, was funnier on the Yahoo Screen incarnation of Community than the father’s existential speech to his son that started “You stupid child. Nobody’s winning anything.”

And it’s followed with a disclaimer voiced by, who else, Dan Harmon, because isn’t it fitting that it is his voice that is the last one we hear. The disclaimer ranges from the borderline bitter (“Viewers may be measured by a secretive obsolete system…”) to the delightfully true (“Some episodes too conceptual to be funny, some too funny to be immersive, and some so immersive they still aren’t funny”) But the whole thing is honest, an honest admission of everything Community was, good or bad, from the man who created it. 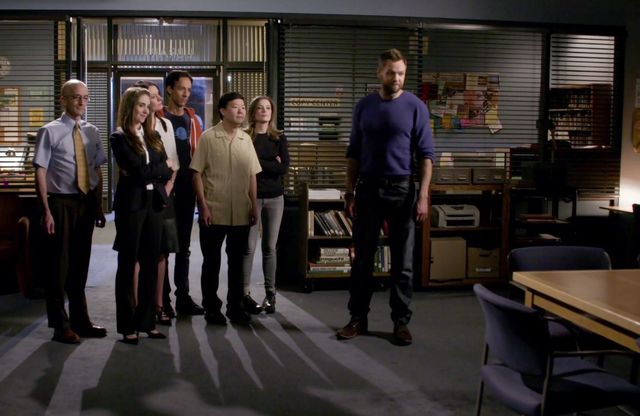