A couple weeks ago, Gov. Cuomo announced that he had appointed a couple new people to replace a couple old people on the Port Authority, the sprawling two-state agency that manages all of the bridge, tunnel and subway connectors between New York and New Jersey, as well as the region’s airports, plus a bunch of random stuff like the World Trade Center. It’s the kind of announcement that passes without comment five days a week. But a deeper look reveals much richer—and more complicated—story lines.

Boys Club. The nominations of Hamilton (Tony) James and Michael Fascitelli as Port Authority commissioners to replace Jeff Moerdler and Rosetta Rosado creates an all-white, all-male Board of Commissioners. (There are 12 commissioner slots, with each state appointing six.) Ms. Rosado was the only woman and only minority (Latina). Gov. Christie replaced Virginia Bauer with William “Pat” Schuber in 2011. As for two recent African-American commissioners: Basil Paterson’s seat is to be filled by Steve Cohen; Sidney Holmes’ seat was filled by Ken Lipper.

Conflict. Then there are some very juicy potential conflict issues: Mr. James is CEO of Blackstone, which four months ago bought about 50 percent of RXR Realty from PA vice chair Scott Rechler. That could make two commissioners business partners in a privately held $4 billion New York real estate portfolio. Govs Cuomo and Christie have agreed to rotate the PA chairmanship, so Mr. Rechler will presumably get that post in the near future.

Meanwhile, Michael Fascitelli remains on the board at massive real estate developer Vornado, which is constantly dealing with the PA—most specifically on the Port Authority Bus Terminal. Will Vornado continue to pursue PA work? And Mr. Fascitelli’s wife is a partner at Goldman Sachs, which does considerable underwriting of PA bonds.

Staten Island. The “forgotten borough” relies greatly on the Port Authority. Three of the four ways to drive on or off the borough are PA facilities—the Bayonne Bridge, the Outerbridge Crossing and the Goethals Bridge (only the Verrazano bridge, run by the MTA, is not a PA-managed entity). Gov. Cuomo has made seven appointments to the PA since becoming governor and none has been from Staten Island. With all the bellyaching by Staten Island officials about the PA, the governor has still chosen essentially Manhattan elites (Mr. Rechler is from Long Island; Mr. Cohen lives on Brooklyn’s Gold Coast but is the consummate Manhattan insider). And yet, count on Staten Island senators to vote to confirm the three new appointees, which is a sign of Gov. Cuomo’s political strength.

Last Link to a Bygone Era. Jeff Moerdler was the last remaining commissioner of the pre-Cuomo era; he attended Columbia with David Paterson, who appointed him to the PA; Jeff’s father Charles Moerdler served in the John Lindsay administration and was Gov. Paterson’s appointee to the MTA board; will Gov. Cuomo dump Charles Moerdler too when his MTA term ends in 2016?

The Stature Gap. Most tantalizing of all is the widening gap in the quality of each side’s appointees. Gov. Cuomo has totally reshaped the New York side of the Port Authority board with men of extraordinary gravitas. Messrs. Rechler, Lynford, Lipper, Cohen, James and Fascitelli all pack sharp financial minds—handy at a time when the PA is looking at selling its real estate assets, especially the World Trade Center. And especially in the cases of Messrs. Rechler and Cohen, they all owe considerable loyalty to Albany. While Mr. Lipper has occasionally wandered off the reservation and others have some potential personal business conflicts, they all have huge resumes and are universally considered heavy hitters.

By contrast, following Bridgegate, Gov. Christie has gone from exerting complete control of the Port Authority to very little. His chairman, John Degnan, is a Democrat who was Gov. Brendan Byrne’s attorney general and ran in the 1981 Democratic gubernatorial primary. He’s not especially close to the governor, though his son Philip works for Gov. Christie as the executive director of the state commission on investigations and overlapped with Mr. Christie in the US Attorney’s office. This is of course very different from his predecessor as chairman, David Samson, arguably Gov. Christie’s closest friend.

Three more commissioners, all appointed or reappointed by Gov. Christie, are Democrats: Ray Pocino from LIUNA, George Laufenberg from the Carpenters Union, and David Steiner, a top Democratic donor and former national AIPAC president. The two Republicans are Rich Bagger and Pat Schuber. Mr. Bagger is a smart, well-liked and extremely competent ex-chief of staff to Gov. Christie, but in his business career, he was at the VP level at Celgene and Pfizer—impressive enough but not CEO or board member the way the New York commissioners are. As for Mr. Schuber, he is a beloved local politician, which is fine, but … not an ex-CEO of Vornado or Blackstone.

The Empire (State) Strikes Back. Remember how both Gov. Christie and Gov. Cuomo endorsed a series of reforms that came from a special panel they had created to address corruption in the Port Authority? One of the recommendations was that the commissioners all offer to resign. Since then, Gov. Cuomo has appointed three new commissioners while Gov. Christie hasn’t had any. Advantage: New York.

This raises a question with meaningful resonance for the people of New Jersey, who have complained since the Port Authority’s inception that they get the short end of the bi-state stick. Whatever criticisms people want to make about the David Samson/Bill Baroni/David Wildstein era—and many of them were valid—the New Jersey side seemed to have been crushing New York on internal politics, perhaps for the first time. Gov. Christie was getting all the projects he wanted, such as funds for the restoration of the Pulaski Skyway, which is a state-owned road. He also accumulated lots of patronage, and dominated the conversation on budgets. That’s at least in part what frustrated PA executive director Pat Foye so much.

Now, Gov. Christie can’t touch the Port Authority, which is radioactive for him nationwide, and New Jersey has essentially diluted its equity as New York’s 50 percent partner. Meanwhile, Gov. Cuomo has ratcheted up the quality and closeness of his appointments, making New York stronger and leaving him more personally invested. When Mr. Baroni and Mr. Wildstein (a former editor of Politicker NJ, the Observer’s sister site) left their positions, the top New Jersey jobs, deputy executive director and director of interstate capital projects, were eliminated.

What happened is that after Mr. Baroni and Mr. Wildstein left, it was clear that New Jersey was losing its fiercest partisans. Gov. Christie appointed a loyalist, Deborah Gramiccioni, to replace Mr. Baroni. But the reform panel recommended eliminating the strict 50-50 NY-NJ personnel splits that had made the agency ripe for corruption and overspending, since decisions were made on a “New York got $50 million for X so New Jersey needs $50 million for Y” basis instead of rationally assessing actual needs. The panel recommended keeping the chairman and vice chairman in place as state appointees (New Jersey and New York respectively), but suggested that the position of executive director be dis-aligned from state partisanship and instead filled by some sort of transportation expert produced by a national search. That would also eliminate the need for the deputy executive director.

Ms. Gramiccioni, who had been Mr. Baroni’s replacement, left as deputy executive director and her job is now eliminated. But the executive director, Pat Foye—a well-regarded Cuomo appointee who emerged as the truth teller of Bridgegate—has remained in place. So that means New Jersey lost two of its fiercest advocates while New York retained its highest executive appointment.

According to one Port insider who spoke to the Observer on the condition of anonymity, this explains why New York is able to run circles around New Jersey when it comes to each state’s needs. “Look at LaGuardia. The redesign project is sailing through the process while Newark can’t get approval for its Terminal A to be refurbished. The belief in New Jersey is that the capital program, which is always supposed to be a 50-50 split, but has always favored New York, has grown in disparity.”

As the presidential season heats up, the last thing Gov. Christie should be expected to talk about will be greater public funding from an agency associated with the biggest crisis of his career. That spells lots of money for New York and rough times for New Jersey. 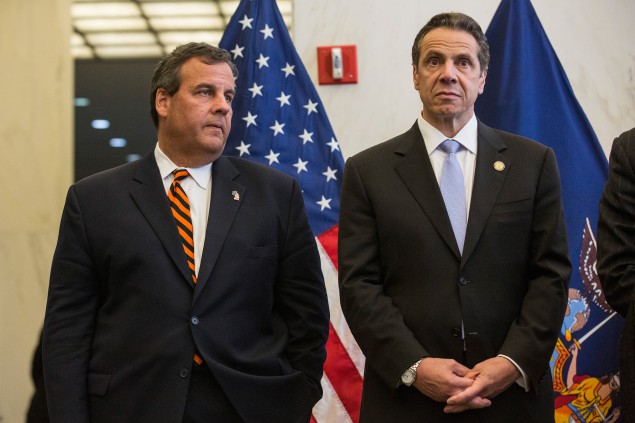