Last night the theater community was graced with Anna Wintour’s Midas touch. It’s no secret that the Condé Nast heavyweight put in her two cents as fashion consultant to the Tony Awards; she was tapped to turn the annual awards show into a glitzier, more fashion-forward affair. She worked with costume designer and chairman of the American Theater Wing, William Ivey Long, to overhaul the evening.

Allowing for these changes, the red carpet was expanded and a slew of models and designers were granted invites. Despite the onslaught of du moment designer labels on the carpet, including Joan Smalls in Givenchy, Elisabeth Moss in Oscar de la Renta, and Taylor Schilling in a peek-a-boo Michael Kors gown, the sparkle factor here could not be denied.

Co-host of the evening, Kristin Chenoweth doubled up on the bling by pairing a beaded Zac Posen dress with a simple pair of Eva Fehren earrings. While these baubles were delicate, they were a tasteful pairing for Ms. Chenoweth, and it’s great to see her support a young, independent designer on her big night.

For a black tie event, the obvious jewelry choice tends to be earrings. Patina Miller, the 2013 Tony Award winner of Best Actress in a Musical, opted to rock a stack of Fred Leighton bracelets with her Jason Wu t-shirt dress. Particularly noticeable was her cabochon emerald piece, which featured Fred Leighton signature alongside a spate of diamonds and sapphires.

It might seem obvious to pair gold jewels with a gold jacquard dress, but The Way We Get By actress Amanda Seyfried added just the right amount of sparkle to her Oscar de la Renta dress. The open neckline and pulled-back chignon allowed these Tiffany & Co. Schlumberger V-Rope ear clips to seriously shine.

Model Bella Hadid has been on a roll lately with a lineup of show-stopping red carpet looks. For the Tony’s, she was dripping in Chopard diamonds, including a stunning pair of chandelier earrings which played nicely alongside a graphic Prabal Gurung dress.

Constellation‘s Ruth Wilson make a bold stance in a fuschia Ralph Lauren Collection gown, featuring a voluminous silk gazar skirt and an added dose of volume from her Verdura earrings. The swoops of diamonds were dramatic, but in a delightfully subdued way, quite like this particular Tony nominee. 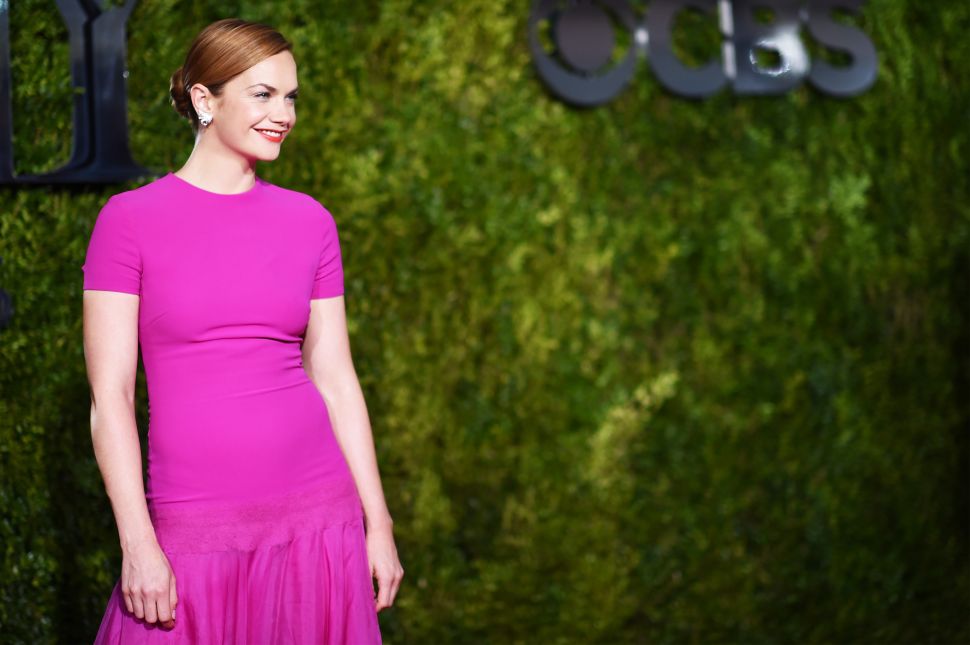