Based on real people and facts, Set Fire to the Stars is a harrowing but tedious chronicle of Welsh poet Dylan Thomas’ time in America in the 1950s. A noisy, brilliant, uncontrollable alcoholic known to terrorize the public until he brought out the cops, he was the idol of a New York academic named John Malcolm Brinnin (solidly portrayed by a surprising Elijah Wood). Brinnin is the professor who orchestrated a tour of Thomas’ poetry readings and took it upon himself to be responsible for the eccentric writer’s behavior and well-being during his stay in the U.S. “How much trouble can one poet be?” he asked. The job turned out to be two handfuls of nothing but trouble.

The excellent British actor Celyn Jones, who co-wrote the screenplay with director Andy Goddard, plays the rotund Thomas as a cross between Dennis the Menace and Oscar Wilde. The black and white movie is 97 minutes of mischievous adolescent self-indulgence that impressively recreates New York in the ’50s, which is doubly remarkable since it was filmed in Wales. “It was a pleasure, Mr. Thomas, I’m a great admirer of your work,” says the hotel doctor called to the poet’s suite shortly after his arrival, and exiting with the sound of vomiting in the background. And that’s how it goes, as the film grows into a solemn warning about the dangers of meeting one’s idols.

After passing out cold on the eve of his departure for an important lecture at Yale, Brinnin spirits Thomas off to a country cottage in Connecticut fortified only by a diet of Tootsie Rolls, Baby Ruths and Milky Ways to clear his mind in preparation for the demands of the college circuit. In one amusing scene, the great and equally eccentric novelist Shirley Jackson and her husband Stanley Hyman come for dinner and everyone takes a turn telling a horror story, including a macabre tale about injecting a harmless pet white mouse with a hypodermic filled with Drano. (Thomas’ odd encounter with the author of The Lottery has been documented in several books, including Brendan Gill’s Here at the New Yorker.)

Reading Thomas at the lectern, Ceylan Jones gives a masterful performance, and Shirley Henderson is a colorful, screwy Shirley Jackson. But the real shock is Elijah Wood. The former child star from Flipper, The Adventures of Huck Finn and potato chip commercials has grown slowly through a series of awkward B movies to a lean, sensitive and brooding young man of range and polish. John Brinnin is at his best in his most mature role to-date. Escorting Thomas from one embarrassing episode to the next, his tour sponsor labels Brinnin’s devotion to Thomas “a side-show huckster with your very own circus bear.” Charming one minute onstage, then telling the provost, vice chancellor, endowed professors and half the collegiate board of governors at Yale to “go fuck yourselves,” Thomas not only marched to a different drummer but ahead of the whole damn parade.

The movie pales by comparison to the famous Sidney Michaels play Dylan, which starred Alec Guinness on Broadway and was based on Brinnin’s definitive book Dylan Thomas in America. On film, 97 minutes of drunken shenanigans and mischievous adolescent self-indulgence eventually grows annoying and breeds impatience, but Set Fire to the Stars is a carefully constructed memory piece about a specific time and place in the footnotes of literature. It’s a curious thing to make a film about, since only the smallest possible audience could possibly be interested, but tourists still put Thomas’ personal table at the White Horse Tavern, his favorite hangout in Greenwich Village, high on the list of things to see and places to visit in New York City. 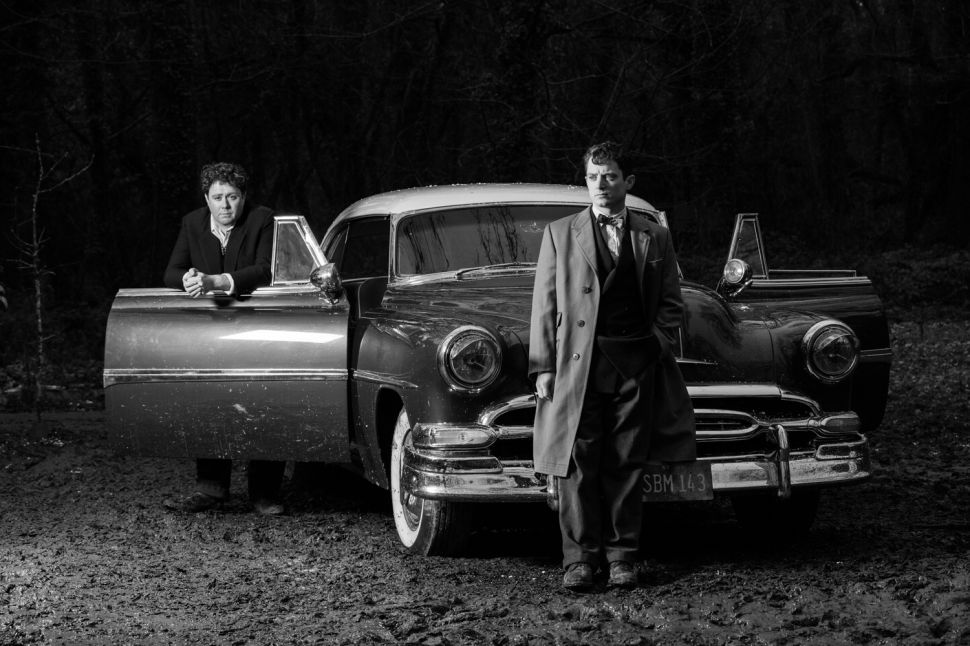