The video game industry’s most exciting week of the year is here. Gamers all over the world have been keeping their eyes glued to their computer screens to see the new games coming out in 2016, 2017 and, if we’re very lucky, later this year.

E3 is still going strong as those able to attend rush across the show floor for a chance to talk to developers (or PR people) and maybe play some unreleased games. For the rest of us plebs stuck watching at home, E3 is all about the press conferences. If there are any big announcements to be made, they happen here. These conferences are in parts exciting, occasionally disappointing, usually awkward and this year, a little bit creepy. Looking at you, SquareEnix. Here’s what happened.

Fallout 4 developer Bethesda kicked things off earlier than normal this year by holding their first-ever E3 press conference on Sunday night. They started the show strong by announcing a new Doom. Remember Doom? It looks like this now. 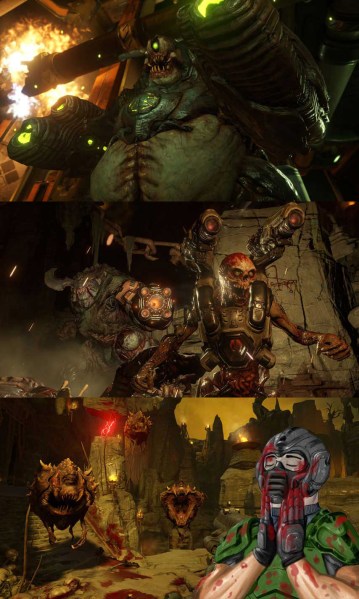 Then, they announced a follow-up to their 2012 hit Dishonored. The trailer was brief, but it heavily featured a new playable character: Emily, the little girl you saved in the previous game. She has since grown into every bit the badass ninja her predecessor (and now partner) was.

But once they brought Fallout designer Todd Howard out on stage, nothing else mattered.

Everyone knew he was going to tell us more about Fallout 4, but nobody was prepared for how much more. He showed off the much-improved character creation system and dispelled a few fears when he announced that, even though the main character is voice-acted this time, you can still play as a woman. We got a brief glimpse of the world pre-apocalypse before the demo skipped ahead to show off a complex weapon and armor crafting system and an option to build and maintain your own post-apocalyptic settlement.
[protected-iframe id=”e6da84e8e7da7069168da3b82ad8c6a2-35584880-14935720″ info=”hash” class=”twitter-tweet”]

Congrats on your first E3 presser, Bethesda. You pretty much had us all feeling like this.

The Monday of E3 is a long one. Four companies hold press conferences that day and Microsoft got things started by showing us some Rise of the Tomb Raider. The game looks like a fun follow-up to the 2013 hit reboot of the series and we even see Lara start to raid a few tombs. Although, the way they chose to show tension and danger in the trailer did get a little repetitive.

Microsoft also built up a bit of goodwill by showing off some awesome smaller games from indie developers, including Beyond Eyes, a game where you play a blind girl searching for her lost cat. It looks absolutely beautiful.
[protected-iframe id=”578feda7516092ec565a86564334abd0-35584880-14935720″ info=”hash” class=”twitter-tweet”]

Of course, some of that goodwill was called into question when Microsoft announced that Early Access games would be coming to Xbox. If you don’t know, Early Access means you can pay money for a game that isn’t done yet and, in some cases, is only playable in the loosest sense of the word. Some developers like it because it allows them to bring some money in while the game is still being made. Sometimes it’s the only way development of a game can continue. Many players are not so keen on it because nobody likes paying for broken stuff.

Of course Day Z creator Dean Hall announcing that his game would be released via Early Access left Microsoft open to a few jabs like this.

Definitely the highlight of Microsoft’s conference was when they showed of Minecraft for HoloLens. Essentially, you put on a pair of glasses that project the game onto a table. You can then move around it, and manipulate the world with your hands. Here’s what it looks like.

After seeing that pretty much everyone looked like this.

Of course, once the game is out, it can only lead to this conversation.

The second press conference of the day was an exercise in frustration and boredom, broken up by fleeting moments of cool. Everyone was waiting to see gameplay from Star Wars: Battlefront and EA new it. Throughout the presentation, a little graphic kept popping up in the bottom of the screen telling us just how much time was left before we’d see Battlefront. This only made the interminable mobile game and sports game announcements all the more excruciating. 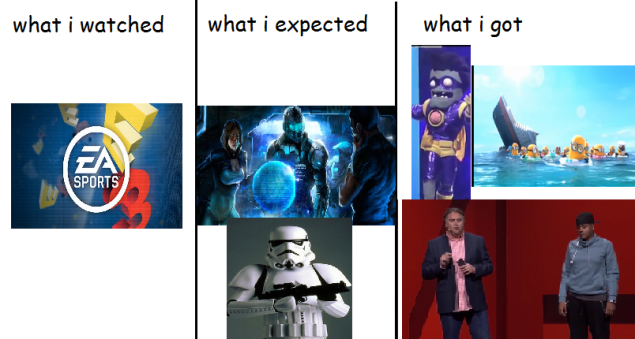 Yes, we sat through a Despicable Me Minions mobile game, someone called Hoop Gawd awkwardly demonstrating a NBA Live 16’s creepy face-scanning companion app, and some guy dressed as a zombie superhero for reasons that weren’t entirely clear. Just to see some Star Wars.

That’s not to say there weren’t some good moments in between. DICE finally revealed some details on the follow-up to the flawed but beloved cult game Mirror’s Edge, where some observant viewers noticed a strange similarity.

And finally, there was this guy.

A developer who’s obviously very passionate about his game and a little nervous about being on stage. In an endless stream of put-together corporate suits, he was the only genuine human being in EA’s conference. He and his little buddy Yarnie immediately earned the internet’s adoration.
[protected-iframe id=”95a067e3b986d40caefed18c1f457579-35584880-14935720″ info=”//platform.twitter.com/widgets.js” class=”twitter-tweet”] 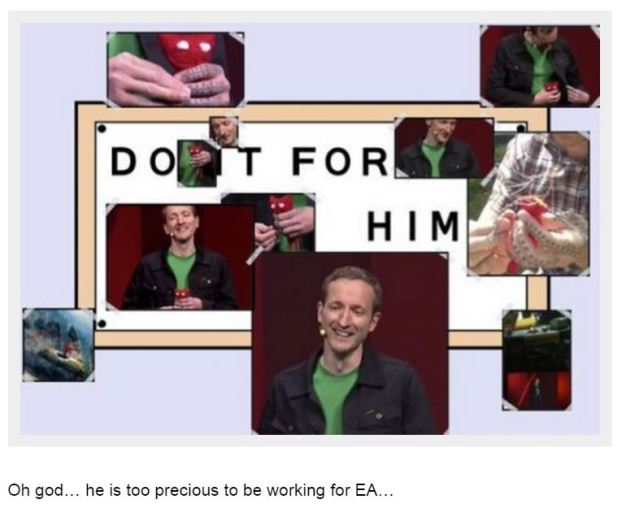 And after all that, we finally saw some Star Wars: Battlefront. It looked OK.

Most companies have E3 pressers down to a science. Everything is planned, scripted and rehearsed almost to death. Ubisoft’s aren’t that way. They’re the only company that still treats their live press conferences like a show. A crazy, ridiculous piece of theatre. Consequently, the games can sometimes get overshadowed. Like this time. The press conference opened with an excellent trailer for a South Park game with the best title ever. 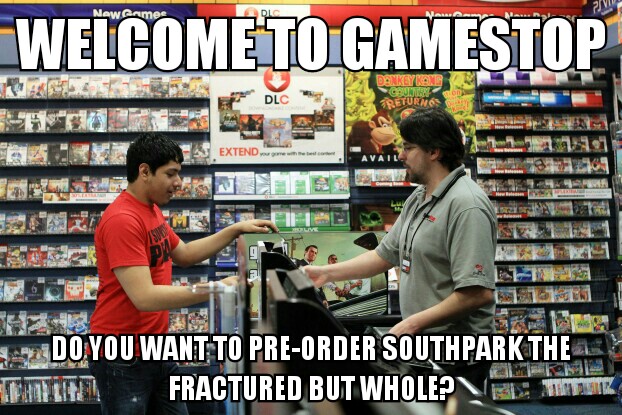 After that, the games weren’t memorable. They showed off Tom Clancy’s The Division, an online loot-driven shooter taking place in post-apocalyptic New York, and the new Assassin’s Creed game. Oh, and a new Ghost Recon game that looks fun. But all I can really remember are supremely awkward moments like this. 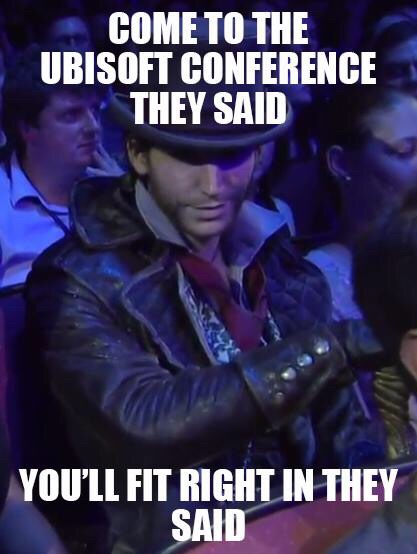 This is the big one. This was the conference that everyone was tweeting about. There were many games shown at Sony’s press conference, but only three mattered. The first was The Last Guardian. This game has been in development since 2007, and after years of delays, the game’s director leaving the company, and being a no-show at last year’s E3, there were questions about whether it would come out at all. Well, it finally showed up. What’s more, we finally saw part of a level.
[protected-iframe id=”c5083fe84d95ebf9e55f8763dc01592f-35584880-14935720″ info=”//platform.twitter.com/widgets.js” class=”twitter-tweet”]
We even got something close to a release date: 2016. Hey, it’s better than what we had before.

The next big announcement was one fans have been clamoring for for at least 10 years. A full remake of Final Fantasy VII, one of the most beloved games ever made. After hearing we’d finally be getting the game we’d been wanting since the last PlayStation was announced, it felt exactly like this. 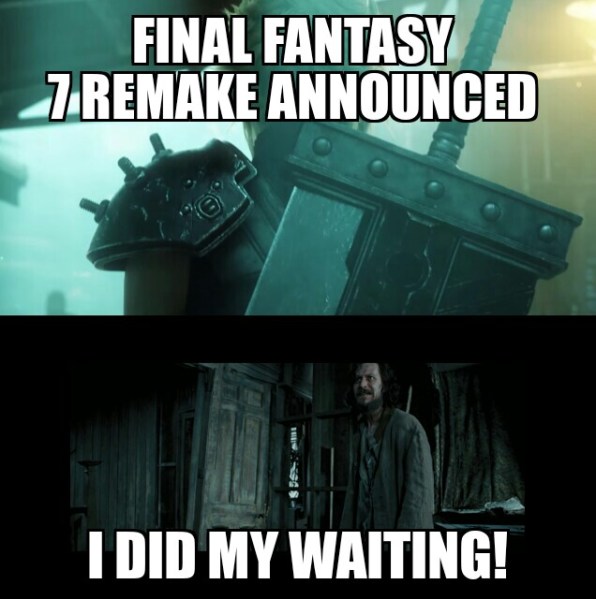 Then, we started remembering the weirder things about that game that might look a little weird in HD. Like the scene where the main character (don’t ask why) needs to dress in women’s clothes to infiltrate a villain’s mansion. And to get underwear he has to go here (again, don’t ask why).
[protected-iframe id=”c4eb3d1721eb7b1857bd5326418db07f-35584880-14935720″ info=”//platform.twitter.com/widgets.js” class=”twitter-tweet”]

You know what? Bring it on. Can’t wait to see a full HD version of… that.

The last big thing Sony announced was Shenmue 3. Shenmue originally came out on the Dreamcast back in 2000. Its sequel was released on the original Xbox a couple years later, but neither game sold enough to turn a profit, and future entries in the series were cancelled despite Shenmue II ending on a cliffhanger. Series creator Yu Suzuki announced that Shenmue 3 would seek funding on Kickstarter. Its $2 million goal was reached in less than 24 hours. Sony then stepped in and said they’d also be funding the project.

Those three announcements were the perfect feel-good ending to a very long day of press conferences.

Nintendo doesn’t hold an actual press conference anymore, but they do make a special video where they announce upcoming games. This video featured a genuinely funny puppet show featuring Nintendo executives made out of felt.

Unfortunately, the games they showed were nowhere near as well-received. 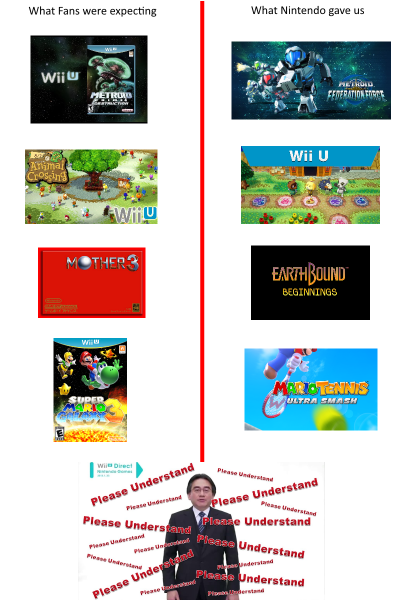 The final press conference of E3 went to SquareEnix. Most of their upcoming games had already been announced at other conferences, but there was still one we had yet to hear about: Kingdom Hearts III. And boy did they make us wait. They even showed off a Kingdom Hearts mobile game as if that was the big announcement.

When we finally did see the trailer, it overshadowed everything that came after it. SquareEnix fans had gotten what they wanted and everything else was just filler.

The developer of the new Neir game doesn’t like showing his face in public. This is how he chose to obscure it. Told you E3 got weird. 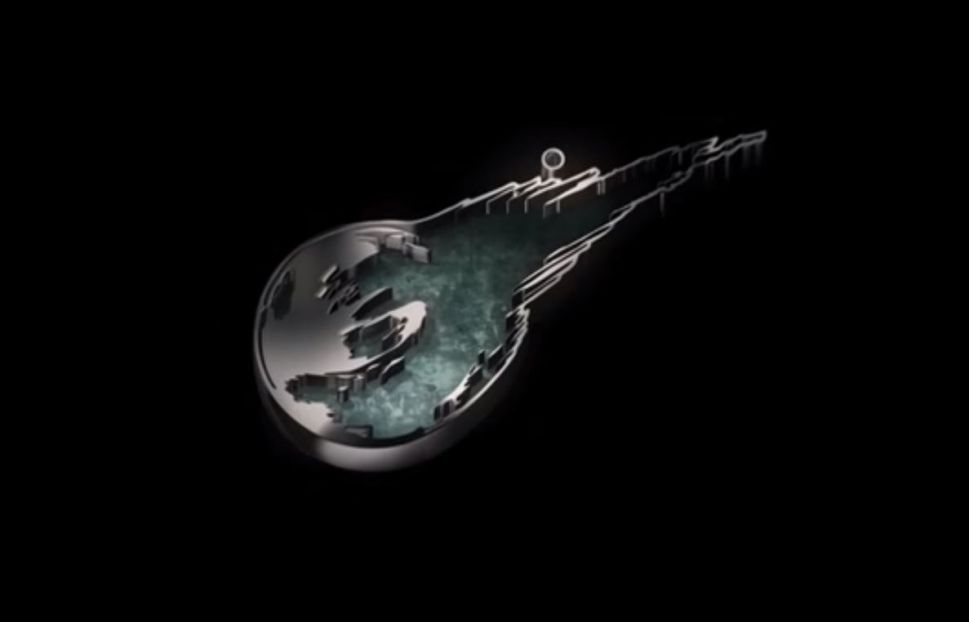