After a six-year effort, The Planetary Society overcame technical and financial difficulties to finally launch its solar sail project into orbit aboard the United Launch Alliance Atlas V rocket. We attended the event at NASA’s Kennedy Space Center/ Cape Canaveral launch complex and spoke with the CEO of The Planetary Society, Bill Nye.

Originally co-founded by Carl Sagan and now spearheaded by his one-time astronomy student, renowned science advocate Bill Nye, The Planetary Society is a global non-profit organization whose goal is to promote citizen-funded scientific research and reduce costs associated with space exploration. The society’s flagship project is the LightSail spacecraft, the culmination of a vision that intends to build and operate a lightweight vehicle that sails primarily on beams of light. The theory behind the project ,as Nye describes it, is “sunlight or light, even though it has no mass, has momentum that can push these things through space.” Scientists at the Planetary Society intend to use this method to accelerate the small spacecraft, which they commonly refer to as the “loaf of bread” due to its shape and dimensions. On May 20, 2015 the LightSail-1 prototype launched into orbit from NASA’s Kennedy Space center for a dramatic 25-day stay in low-earth orbit.

The mission of the LightSail-1 test was to determine whether solar sails are a viable and efficient form of vehicle acceleration in the vacuum of space. This preliminary launch delivered the 10x30CM Cubic Satellite (CubeSat) which houses the Lightsail to an orbit low enough to ensure its return to Earth a few days after it deploys its large 32 square meter mylar sail. At an altitude of 500 miles, the spacecraft’s position would allow a full testing of its systems in preparation for its next proposed mission in 2016, which could take Lightsail into a higher orbit. To say the least, the test mission didn’t go as smoothly as planned.

The LightSail spacecraft failed to deploy the basketball-court-sized sail on its first attempt due to a failure in communication while powering up its solar panels. Over the course of two weeks since the launch, The Planetary Society faced a spectrum of issues stemming from its communications problem and the falling orbital position of the spacecraft. On May 31 communication was reestablished, but the organization’s scientists failed to upload a software patch that would ensure sail deployment. On June 3, the solar panels finally initialized, but contact was lost once again due to a faulty, uncharged battery unit. On June 6, when the mission was beginning to look like a complete failure, the LightSail spacecraft miraculously established contact with the Planetary Society to continue its mission. The team was able to finally deploy the solar sail and collect photos from the now successful test. The mission ended on June 14 when the spacecraft plummeted into earth’s atmosphere.

Motor is running! Sail is Deploying!!! 39 Years after Prof. Sagan spoke of it!

Can you describe on a personal level what it feels like to send your own object into space?

Well, I’ve been through this a couple other times, but did not have the years of investment. So, let me think about this – it is very moving. I held the test pattern, the photometric calibration target for the Opportunity Rover. So, you know this feeling…well, in Florida you probably don’t know this feeling but if you are ever on a high bridge, you’d have to imagine there are places with hills, and riverbeds and stuff. No, no you’ve had the feeling…So, you’re in a boat, and you’re saying: “I sure hope I don’t reach into my pocket and take out my keys and throw them overboard!” You know that feeling? You know that, if you throw the keys down, they are still down there in the someplace – you could hire the right dive team and go get it, right? But when you hold this thing, and then 11 months later, and you see a picture of it on Mars, it’s a little different vibe, you know? I’m never going to get that back.

At what point will you find satisfaction in your works – is there an endpoint where you can say you’d be content with your impact on humanity?

Nothing yet, Maybe when someone I’ve taught goes on to win a Nobel, or cures cancer, maybe then, but not yet. However I do take a significant amount of pride in Carl Sagan including me in his novel The Demon Haunted World: Science as a Candle in the Dark.

Through this entire press conference, you’ve mentioned Carl Sagan a number of times, and it’s obvious you draw quite a bit of influence from him. Do you ever find yourself comparing life’s work?

No, no.  (Mr. Nye then rattled off a list of Mr. Sagan’s achievements, which he sees as transcending his own: “Nobel Prize Laureate, doctor, contributor to a number of Apollo missions”). 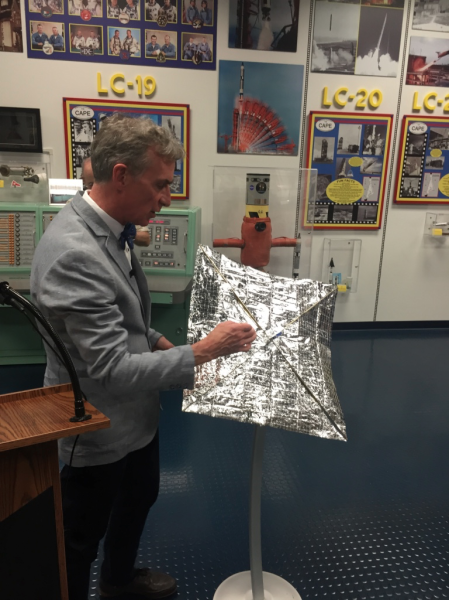 You spoke significantly about influencing children at a younger age and increasing competency in developing minds. Can you elaborate?

I urge the teaching of simplified algebra to children at ages much younger than we currently do, in an effort to instill the benefits of a curious and actively searching mind to the following generations. It’s one of the most important facets of science education – algebra. Nothing too complex, just simple algebra – just enough to coddle them along. Making mathematics in general more palatable to the people is inherently difficult The more able-bodied brains, the more potential scientists we have in the future. The more scientists, the more technological development and as an extension: more space stuff.

Building on that, how do we as a society properly influence younger generations?

By retrofitting our education systems. There is a drop off point past 10 years of age, where it becomes difficult to instill a passion for learning beyond it. Which was a primary reason for the approach of my show, that’s who it was for. There is a weakness in core curriculum and core standards that there is still nothing about science. I find this troubling, as science is a cornerstone to developing minds and is of paramount importance in the educational field.

What aspect of the LightSail mission is most important to you?

The thing, you guys, that I really want…is the picture – I want the picture from these cameras” (when referencing cameras aboard the lightsail) I just have such a clear vision in my mind of how great it would be…the shiny sail deploying, the earth below. Oh, so I’m very hopeful.

This just in: a complete image of #LightSail in space! The future of space travel… pic.twitter.com/bmdVVUFVon

With the completion of this test flight, the Planetary Society intends to learn from the tumultuous mission and apply these lessons to the primary launch in 2016, which will attempt to actually sail beyond low earth orbit using the power of sunlight. The crowdfunding effort on Kickstarter has surpassed its goal of $200,000 and reached $1,152,209 when the funding deadline ended on June 26. 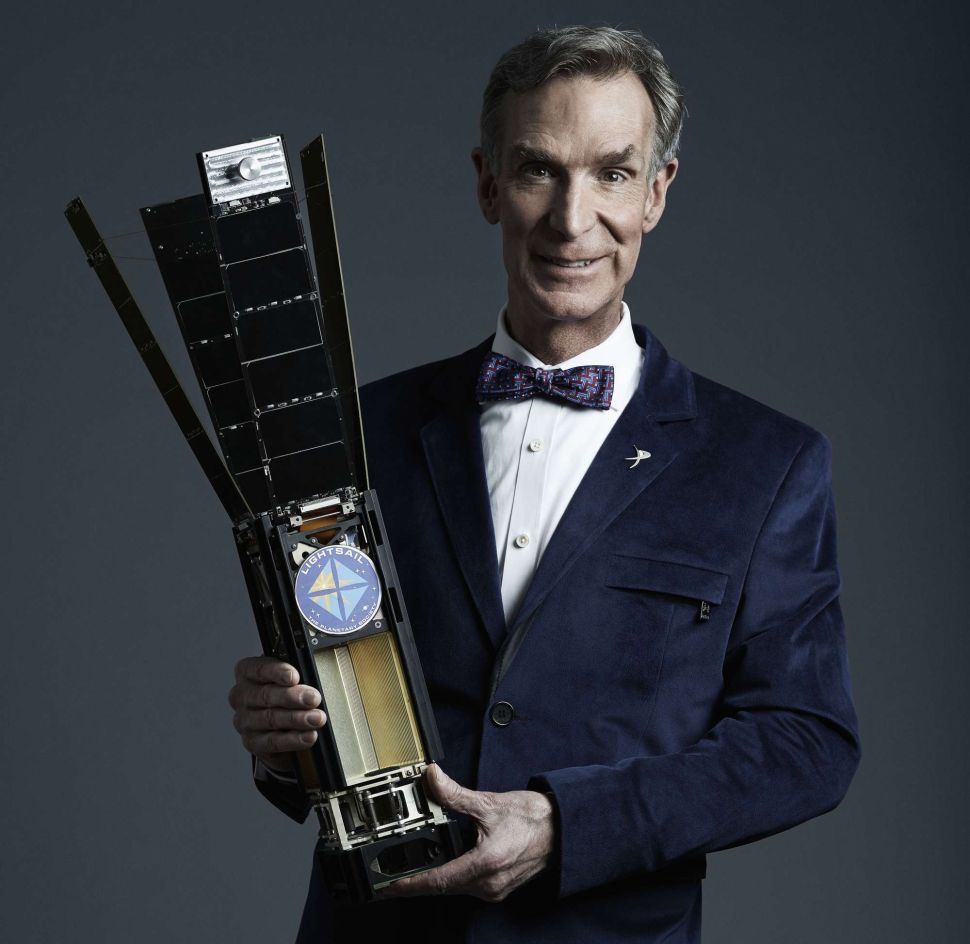