Television fans know him as the Executive Producer of such hit shows as ER, Law & Order: SVU, and Under the Dome, but overseeing TV dramas is only a small part of Neal Baer’s body of work. Tuesday night, a documentary that he produced will air on PBS.

If You Build It highlights a radically innovative approach to education that focuses on a curriculum based on design-centered hands-on learning for a group of high school students.

The film follows designers Emily Pilloton and Matthew Miller as they work with those students in rural Bertie County, the poorest in North Carolina. The couple embarks on a difficult mission — seeking to not only drastically change the current teaching model, but also to inspire at risk students to invest fully in their own education and transform an entire community as well. This is no small task, as depicted in the film.

Baer’s involvement in the project took some outreach on his part as he actively sought out the designers after discovering their work. “I read Emily’s book, Design Revolution, then I found her on Facebook, met her in San Francisco and told her right out, ‘I want us to make a documentary together,’” explains Baer.

Evaluating the current education system, Baer says that, “just teaching ‘skills’ is not conducive to addressing the pressing needs in the world today. We do need people with very specific skills, but what we really need is people who can evaluate where we’re going, what works, what doesn’t, and how we can live together. Just doing strictly vocational work is not going to do that. It’s just not enough.”

This is why Baer, Pilloton and Miller believe design-centered education is imperative. “We feel this program cohesively includes all of the critical disciplines – math, science, history, art, and engineering,” explains Baer. “This type of project-based learning stresses using creative problem-solving techniques that teaches students to think in a very analytical way, leading those students to come up with solutions that are extremely well-thought out. Using the plans they’ve mapped out, they see the project through to completion. This method shows students that they can progress from an envisioned idea to a fully functional finished project that benefits a lot of people.”

The message of If You Build It is that change is possible, but people have to be behind it. It takes a belief not only in the idea but in the process as well and, unfortunately, often attempts such as this at innovation are not met with the necessary enthusiasm and support to make them possible.

But having said that, it’s encouraging to see the high school students in this film embrace a project that’s foreign to them and then proceed to work hard to see it through to fruition. Not wanting to spoil anything here, by the conclusion of the film, viewers may feel conflicted about what’s transpired during the course of the venture; there is a both a sense of hope and defeat at the same time. But the heartening aspect is that this mission occurred at all, meaning that hopefully this endeavor will serve as a stepping stone, leading to more attempts to boost design-centered educational models because If You Build It clearly shows that many aspects of the teaching method do work, and with get results.

Baer wants everyone to know that this isn’t a film to be simply watched, hoping that viewers will be inspired to take action. To that end, Baer urges people to visit the site Actionlab.org. “On the site, we provide actionable steps for people to get involved in the issues related to the film,” explains Baer.

Joining Baer as producer of the film is Christine O’Malley with Patrick Creadon directing. O’Malley served as associate producer on the Academy Award®-nominated documentary film Enron: The Smartest Guys in the Room, while Creadon helmed Wordplay which was nominated for both a Critics’ Choice Award and a National Board of Review Award for Best Documentary.

Creadon has described If You Build It as Extreme Home Makeover meets The Breakfast Club, saying, “You’re watching this group of young people come together to complete this project that will benefit their community. It’s an unlikely group of people, really, and by the end, ideas, attitudes, and, most amazingly, some of their futures, are changed. The entire process affects everyone differently and it’s very stirring to watch all of it unfold.”

If You Build It airs on PBS Tuesday night. For exact airtime in your location, please visit PBS.org.

To view a trailer of the film and learn more about If You Build It, please visit this site. 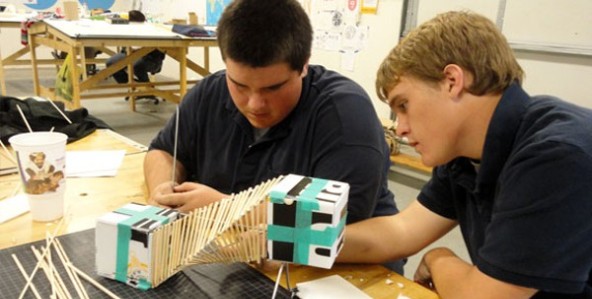 Filed Under: TV, PBS, If You Build It