TRENTON — Yesterday’s Senate Budget Committee meeting was mostly about getting through Democrats’ $35.3 billion spending plan for the coming fiscal year, but amid all the talk about pensions and millionaires taxes was the quiet tabling of another major progressive initiative.

Slated for a vote at its 10 a.m session, the committee removed from its agenda the Democracy Act, a complex Democratic bill that aims to improve turnout at the polls by modernizing and streamlining the state’s voting laws. The fast-tracked bill has become a top priority for Democratic leaders in the legislature since it was introduced at a much-publicized press conference last week, it’s sponsors vowing to get it to Gov. Chris Christie’s desk by the end of the month.

But disagreements among Democrats moving the bill — particularly among members of the legislature’s black caucus — have brought into question whether they will meet that timeframe.

Sources say the controversy comes down to objections raised in particular by state Senator Nia Gill (D-34), who earlier sponsored her own piece of legislation that would expand early voting in the state, one of the main provisions included in the Democracy Act. Gill’s bill passed the Senate last year, but sponsors of the larger initiative, including Senate President Steve Sweeney (D-3) in the Senate and Speaker Vinnie Prieto (D-32) in the Assembly, as well as its other architects, including the liberal group NJ Working Families, see their package accomplishing the same goal.

So they’ve pushed it aside, drawing the ire of both Gill and other members of the black caucus, such as state Senator Ron Rice (D-28).

“That bill should have been moved,” Rice said, referring to Gill’s bill. “The request was that her bill shouldn’t be commingled with the rest of the bill, it should move forward together.”

Rice first raised concerns over the new legislation just before Democratic leaders in the Assembly and Senate unveiled it earlier this month, arguing at the black caucus’ annual budget conference that his own members hadn’t been consulted on the bill, despite the issue of voting rights being obviously close to their hearts. And he’s since objected to specific provisions of the bill, including the removal of language relation to ex-offenders, as well the inclusion of a same-day voting provision that he fears might lead to voter fraud.

The latter concern led lawmakers to take the same-day provision out of the bill at an Assembly Appropriations Committee meeting on Monday, where it was ultimately released.

But Rice suggested the handling of the whole situation highlights another major problem he brought up at that conference– something he called an “ongoing lack of communication” between his caucus and the Democratic leadership.

“We are coequals,” Rice said at the conference. “And sometimes we don’t feel like that because the issues and concerns that we have oftentimes go unaddressed, and sometimes for too long.”

Rice said supporters of Gill’s bill want Democrats to take the language about expanding early voting that overlaps with the senator’s out of the larger legislation, which is now pending in the lower house after Monday’s committee hearing, and let them both pass together. Lawmakers can then amend it in the Senate, where it still needs to pass the upper house’s budget committee.

It was due to that confusion — and due to objections to Gill being elbowed out — that led to lawmakers to table the bill yesterday.

“Some people are being disrespectful of the process,” Rice said. “[Gill] worked very hard on that bill, and to take the sponsorship from her is something we’re not OK with.”

He added of the act’s sponsors: “It seems like they’re doing more for that family alliance than legislators.”

Gill herself, in a report by NJ Advance Media, said there is another layer to the fight, one that has to do with her raising serious questions regarding the hiring process for the new executive director, counsel and budget officer in the Office of Legislative Services. She said the Assembly’s refusal to pass her bill separately is payback by Prieto for her agitating about the OLS hires.

OLS is scheduled to hold a meeting tomorrow morning, when they are expected to approve candidates for those positions.

“The real story is about attempting to silence and intimidate others from speaking up tomorrow about the way Speaker Prieto… has chaired the Legislative Services Commission,” Gill told the site.

Rice, for his part, said he will continue to work with both Sweeney and Prieto on refining the larger legislation and making sure Gill’s bill remains intact.

“In terms of the voters rights legislation, which included same day legislation which we adamantly opposed, my understanding is they took it out and recognized there’s a lot of issue surrounding that for a lot of reasons,” Rice said. “In terms of having the ex-offenders language for voting, that wasn’t put back in, and we’re not sure what that means. It doesn’t make us very happy.

“From my perspective, we know there are other issues that may need to be addressed, but the Senate is going to meet in the summer and we’re going to keep working,” he added. 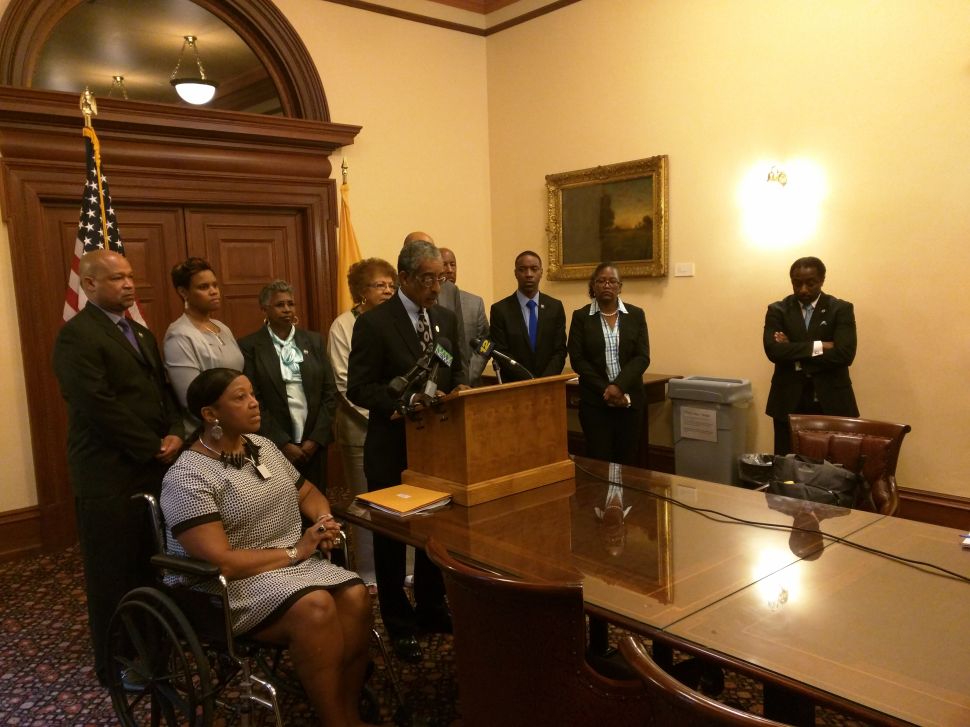