Groups of women were, quite literally, swept off their feet by New York Fire Department first responders Sunday, as models for the famous FDNY annual calendar Miguel Ruiz, Anthony Montanez and Ralph Ciccarelli, good-naturedly lifted them into the air for photos ops.

The event, held at the Hard Rock Cafe in Times Square, was a dual celebration of the New York City Fire Department’s 150th anniversary and the Times Square Hard Rock Café’s 44th founders day. The two organizations teamed up to launch a line of merchandise that will benefit firefighters and fifteen percent of net proceeds from the merchandise will be donated to the FDNY Foundation, the official non-profit organization of the FDNY.

FDNY Commissioner Daniel A. Nigro, who was appointed last June, spoke at the event, thanking the foundation for its work while showing off the department’s latest firetruck, which was designed for the anniversary.

“We have reduced fire deaths to historic lows” Mr. Nigro said, referring to 2012 in which fifty-eight people died from fires, the lowest number ever on records that date back to 1916. Indeed, from 2002 to 2012, the death rate has been an average of eighty-five deaths per year, a steep decline from averages of 140 in the ’90s and 236 in the ’80s. Mr. Nigro’s next battle ground is diversifying the FDNY, which overwhelmingly employs white males, after the city paid out nearly $100 million to minority applicants in 2014 as the result of an employment discrimination lawsuit against the FDNY. Notably, this year’s 2015 calendar features its first female firefighter.

The foundation’s three areas of focus are public education, training and equipment for the fire department, working on initiatives from fire-safety education at schools and senior centers to training 100,000 people in CPR. Other projects made possible by the FDNY Foundation include the nation’s first high rise training simulator at the FDNY Training Academy in Manhattan, which allows firefighters to train in realistic fires, and the FDNY Fire Zone in Rockefeller Center, a fire safety learning center open to the public. In addition, the foundation provides equipment that benefits members of the FDNY, from radiation detection meters used in emergency situations to fitness equipment.

Sunday’s launch was not the only collaboration between Hard Rock and the FDNY. Later this summer, the Hard Rock Café will host a high-stakes burger cook off with the FDNY—the winning hamburger will be added to the iconic restaurant’s menu for a limited time. The FDNY is also hosting a series of “block parties” in various neighborhoods throughout New York City every weekend this summer. 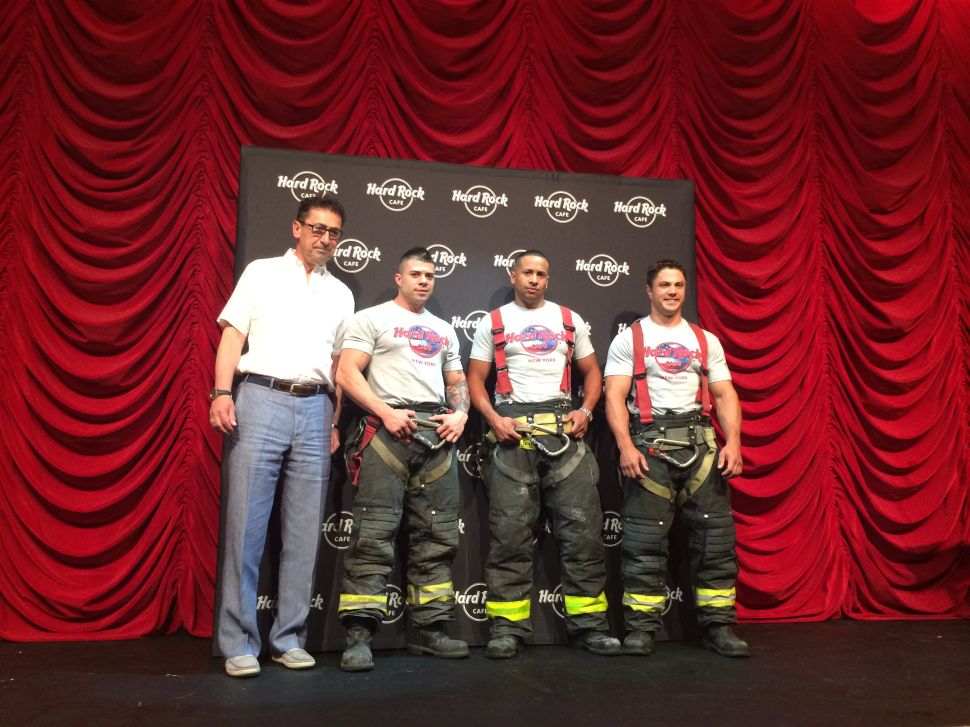