“I don’t think it’s fair, and I think the mayor didn’t think it was fair, and I support his efforts in that area,” Mr. Nigro said today during a City Council hearing on his department’s budget.

Fire and police unions have been hammering the mayor for his refusal to back a reversal to a 2009 state law that cut the disability retirement benefits for firefighters or police officers who are wounded in the line of duty if they were hired after July 2009. A majority of the City Council supports passing a “home rule” message to Albany that would allow the law to be changed, but Mr. de Blasio has said it would be too costly. He’s proposed removing a social security offset and calculating benefits at a higher salary point, which police fire unions have fumed does not do enough.

Councilwoman Elizabeth Crowley today pointed out that Mr. de Blasio’s plan had its critics, many of them working for Mr. Nigro.

“In a lot of ways, it takes a plan that’s not fair and makes it less fair,” Ms. Crowley said.

But Mr. Nigro defended the mayor.

“I applaud his efforts to straighten it out, is what I do,” Mr. Nigro said. “I think a correction has to be made. What that correction is hasn’t been decided yet. I certainly feel there’s a need to look at it further.”

The Uniformed Firefighters Association in particular has hammered Mr. de Blasio on the pension issue, arguing on social media that the mayor is willing to let firefighters who were hired after July 2009 live on just $27 a day if they’re seriously injured in the line of duty and cannot work. UFA President Stephen Cassidy and Patrolmen’s Benevolent Association President Patrick Lynch, no friend to the mayor, held a press conference blasting the mayor for his opposition Friday, ahead of a hearing on the home rule resolution, which the Council could pass over Mr. de Blasio’s veto. They would need to act quickly in order to get the home rule message to Albany before the State Legislature ends its session later this month.

The fight is also yet another chapter in the ongoing fight between Mr. de Blasio and Gov. Andrew Cuomo—who has come out in support of the police and fire unions and is backing the legislation in Albany to reverse the 2009 cut. City Hall has said the union proposal under consideration in Albany would cost $400 million through 2019, and that Mr. de Blasio’s would cost $47 million—though fire unions have said the city’s calculations are faulty.

After the hearing, Mr. Nigro said the mayor was trying to rectify a bad situation.

“Certainly it has an impact on the newly hired firefighters, and the mayor recognized that and put forth a proposal to help that along. So it hasn’t been decided yet, but I certainly support the mayor’s recognition that it was not fair and something needed to be done,” Mr. Nigro told the Observer.

Pressed on whether he thought the plan in Albany was a better one, Mr. Nigro took the company line.

“I certainly support the mayor, as he supports me, and I think it’s good that he recognizes the inequality,” Mr. Nigro said.

While the Council hearing was going on, workers outside City Hall set up risers and a stage to host the annual FDNY medal day, celebrating heroic firefighters, over which the mayor typically presides. Mr. Nigro said he didn’t expect any members of his force to voice their displeasure with the mayor.

“I think all the firefighters Wednesday will be there to celebrate with the heroes and their families,” Mr. Nigro said. 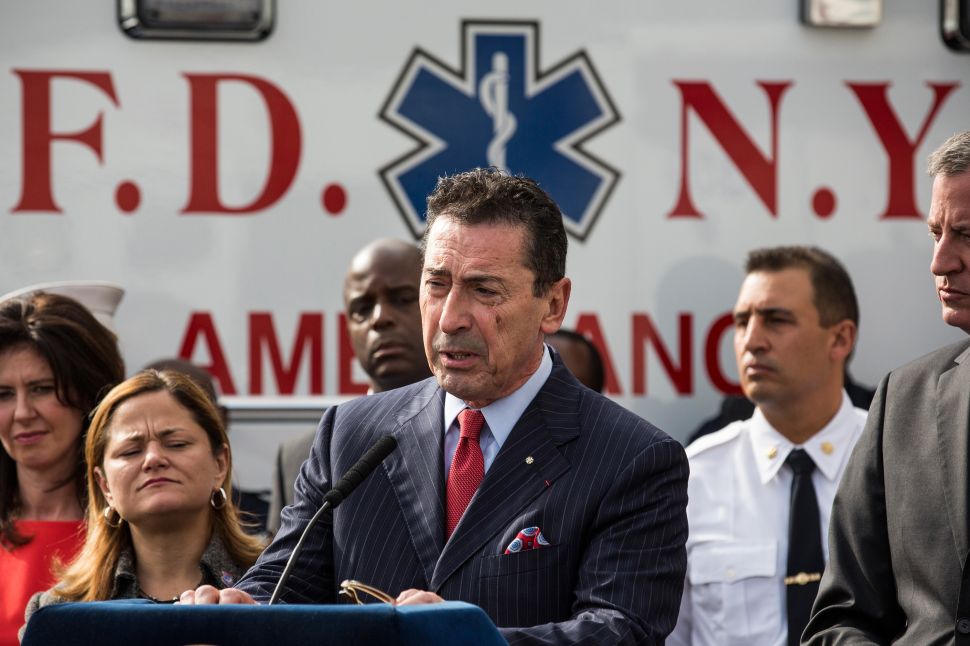