MORRISTOWN —  They stood, eyes glued to the screen, in semi-circles around monitors positioned throughout the room in the county clerk’s office on election night, noshing on plates of sandwiches and cans of soda as they watched the red gauges expand in width next to the names. Cesaro. Myers. Tedesco and Smith. Scapicchio. Krickus. Here the gauges jumped; the candidates with the lead shifted. With 25 percent of districts reporting, it looked like it might be Krickus, Smith, Scapicchio. They jumped again. With 56 percent districts reporting, it could have been Cesaro, Krickus, Scapicchio. Jumped again.

It wasn’t until almost all districts had reported that the winners became clear: it was Cesaro, Myers, and Smith.

“Unbelievable,” someone managed to sputter between mouthfuls of cold cuts.”A split ticket.”

“If I were the unions, I’d do they exact same thing next time around,” someone else added, an obvious allusion to the presence of independent expenditure money thrown in on the side of Cesaro and his running-mates over the course of the race.

It was one of the biggest surprises of an otherwise subdued election night, and it ended one of the most contentious — if not the most contentious — Republican primaries in the state this year. Morris County’s GOP was split in two when Freeholder John Cesaro departed his former running mates to form his own ticket, opting to join with firefighter Angelo Tedesco and Mendham Township businesswoman Christine Myers against incumbents Dave Scapicchio and John Krickus, who recruited Denville Councilwoman Deb Smith. The county’s top leaders were involved, with state Senator Joe Pennacchio (R-26) jumping in behind Cesaro, while Republican County Chairman John Sette — after an original vow to support all three incumbents — joined neighboring district state Senator Tony Bucco (R-25) in endorsing Krickus and Scapicchio.

The race was the epitome of party politics-gone-bad, fracturing an otherwise united GOP for seemingly obscure reasons, pitting career-long friends against one another, set against the backdrop of an overwhelmingly conservative stronghold in the leafy-green suburbs of North Jersey.

But it was the IE money issue that — more so than the personalities, more so than controversy over a solar settlement program that wreaked havoc among Republicans in a neighboring north Jersey district — according to insiders and observers lent the Morris County freeholders race an air of unique political interest. In a post-Citizens United world of unlimited spending and leviathan political action committees, that is, no other race in the state quite managed to epitomize current campaign trends like this one. Democratic and labor-aligned political actions committees engaged significantly over the course of the race, spending some $200,000 in support of Cesaro’s slate, including $24,600 from Operating Engineers Local 825 from Union County, and $8,400 from Forward Central Jersey, a Democratic organization.

The strange political alliance lent Krickus and Scapicchio ammunition against their opponents, who they slammed in mailers and flyers and at one point commissioned Bucco to blast the ticket as “Obama Democrats” in an 11th hour air raid siren warning to Morris County residents.

Down the street, at the Famished Frog following confirmation of the results, supporters began to congregate over drinks for what was supposed to be a party-healing exercise, but turned out to be a little less than that. Rumours that all six candidates had planned to appear at the victory party and begin to the process of putting behind the hard-fought primary turned out to be unfounded. Scapicchio was there briefly, then left; Smith mingled with a crowd that included Sette.

Then Myers and Cesaro walked in.

“The fun’s over now,” one observer cracked. “No more smiles at this party.”

Invariably, in trying to explain the split ticket results, observers pointed to the IE money as the deciding factor in voters’ decision. Cesaro and Myers had it, while Krickus and Scapicchio didn’t. That gave the former candidates, so the argument goes, an irrepressible edge specifically on election day, when labor was able to lend the campaign invaluable manpower and physical resources for a comprehensive get-out-the-vote effort.

But no, that can’t be right. With 10,000 votes, Smith was the top voter-getter on the ticket, more than Cesaro received during the last election when he landed that title. And she didn’t have the support of that money — in fact was the target of it. What gives?

Sette, speaking to PolitickerNJ at the bar, stressed what he considered the be the insignificance of that PAC money in impacting the race.

“We’re all good Republicans. We’ll come together,” he said. “As far as the Democratic and independent expenditure money in Morris County, I don’t think they got a big return. I mean, they spent $200,000 trying to knock off Paul Carifi in Parsippany, and he came in first. And they put $300,000 probably into this race, and what’d they get? Two women, who never ran before, came in first and second.”

It was a fair point. Next to Smith, Myers received the second-most votes, with 9,427. Cesaro garnered 9,374, while Krickus and Scapicchio received a close 9,167 and 9,073, respectively. A referendum on men, then?

Myers scoffed at the idea.

It was also a fair point, one backed up by Smith, who contended it was her qualifications and leadership traits — not the fact that she’s a female — that ultimately turned voters on to her. Some observers in the room noted her relationship with the National Rifle Association, of which she’s a Training Counselor and Patron. Ultimately, she said it was good old-fashioned conservative bona fides that won the day.

“I’m delighted with the results for myself, but disappointed with my running-mates’. I could not have done it without them. But in this race we were severely outspent,” she said. “We didn’t have paid workers going door to door. I don’t know how successful that was, but there was much more behind them.”

Indeed, some at the time saw the Cesaro’s ticket acceptance of Democratic and labor support as political suicide. It gave Krickus and Scapicchio a way to identify their opposition as a trio of pawns backed by those groups, whose interests aren’t necessarily aligned with the residents of a conservative Morris. But that too might have backfired on them. One observer in the room lamented the level of negativity with which the Krickus team went after its opponents, arguing that the smear tactics left voters with no sense of their platform — not to mention a bad taste in their mouths.

Cesaro himself countered during the campaign with the argument that nearly every significant Republican official in Morris, including Bucco and Pennacchio, gets money from labor.

“Hopefully this will be a turning point not only in Morris County but statewide,” he said. “I want Republican voters to take a look at what happened in Morris County, and I want them to say, you know what, they worked closely with these guys. They did well. And what was the promise? Good government. I’ve worked with labor, and that’s the only thing I’ve ever promised. We want them to work. And the difference between us and Democrats, is when they work, we want them to keep most of what they earn.”

“We’ve got to change as a party. We worked closely with the laborers, and they’re not the third rail,” he added. 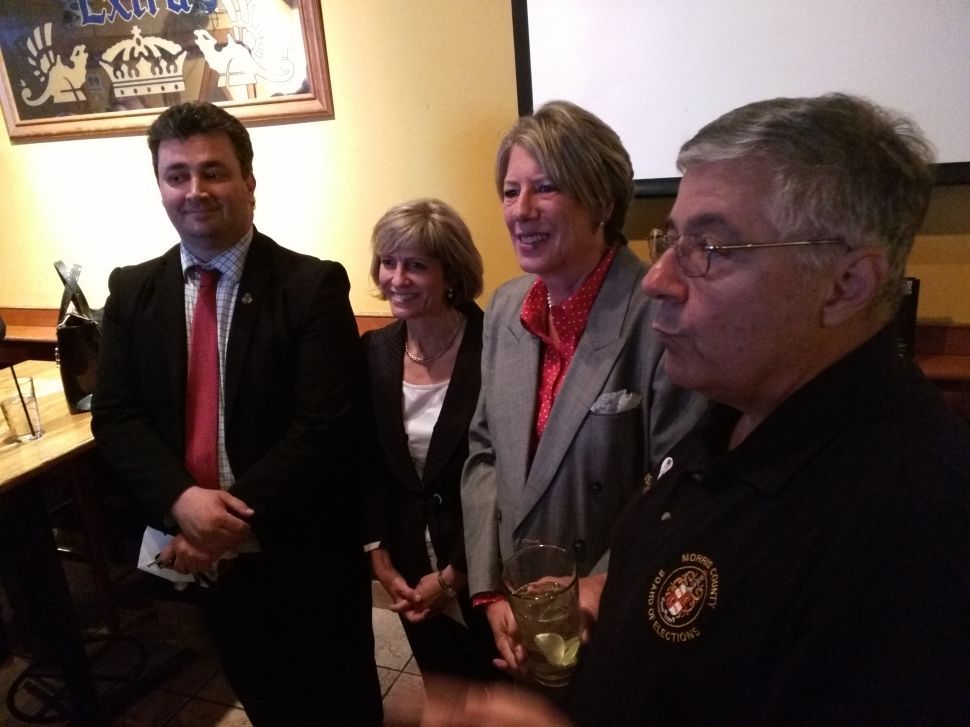