As if bringing Frida Kahlo to the Bronx wasn’t enough, the work of American conceptual artist Jenny Holzer will soon be headed for New York’s Casa Azul. Starting next Wednesday, for four consecutive nights, the New York Botanical Garden and the Poetry Society of America will bring Ms. Holzer’s iconic light projections of social and political texts to the Enid A. Haupt Conservatory. The projections, which will be up from June 10-13, from dusk until 10 p.m. each night, will add a more literary element to the NYBG’s current blockbuster exhibition, “Frida Kahlo: Art, Garden, Life.”

Ms. Holzer is famous for her largely public, emotionally-charged statements on billboards, walls, , mountains, and more. She will display poems she chose by Octavio Paz, Mexico’s Nobel Prize winner, verses from female Mexican poets, and passages from Kahlo’s own personal diary. The chosen phrases will sweep over the conservatory and envelop the glass walls currently housing the exhibition. Ms. Holzer’s inspiration behind the poetic selection comes from the exhibition itself, and Kahlo’s relationship with Mexican culture and the natural world around her. This exhibition, which focuses on those two, key elements of her life, is the first of its kind.

Ms. Holzer is no stranger to large-scale productions. She’s presented her work around the world in more than 15 countries on four different continents. Her work has been shown at Rockefeller Center, the Pyramide du Louvre in Paris, and the Jüdisches Museum in Berlin, just to name a few. Ms. Holzer has also projected her light works onto the mountains of Rio de Janeiro and the Seine River of Paris, encouraging viewers to engage with the natural landscape around them.

At the Kahlo exhibition, which will be up through mid-November, elements of Kahlo’s famous Casa Azul (Blue House), located in the heart of Mexico City, have been recreated. Elements of the house provide a bright colored backdrop for the gardens, along with folkloric décor, tropical foliage, fruit trees, and Mexican cacti. Besides the recreation of Kahlo’s home and gardens, the exhibit also displays 14 original works by the Mexican artist. NYBG curators told the Observer in January they hoped the show would bring over one million visitors to the Garden this year—and it just might.

Ms. Holzer’s projections will take place during extended hours, now known as the Garden’s Frida al Fresco evenings, when visitors will be able to view Kahlo’s pieces in the Art Gallery and experience the New York version of the Casa Azul after hours.

Her works will make their debut on June 9 at the Poetry Society of America’s annual spring benefit before heading to the Botanical Garden the following day. Ms. Holzer will be present at Tuesday’s benefit, as she is being honored for her continued emphasis of the power of poetry through her artwork. 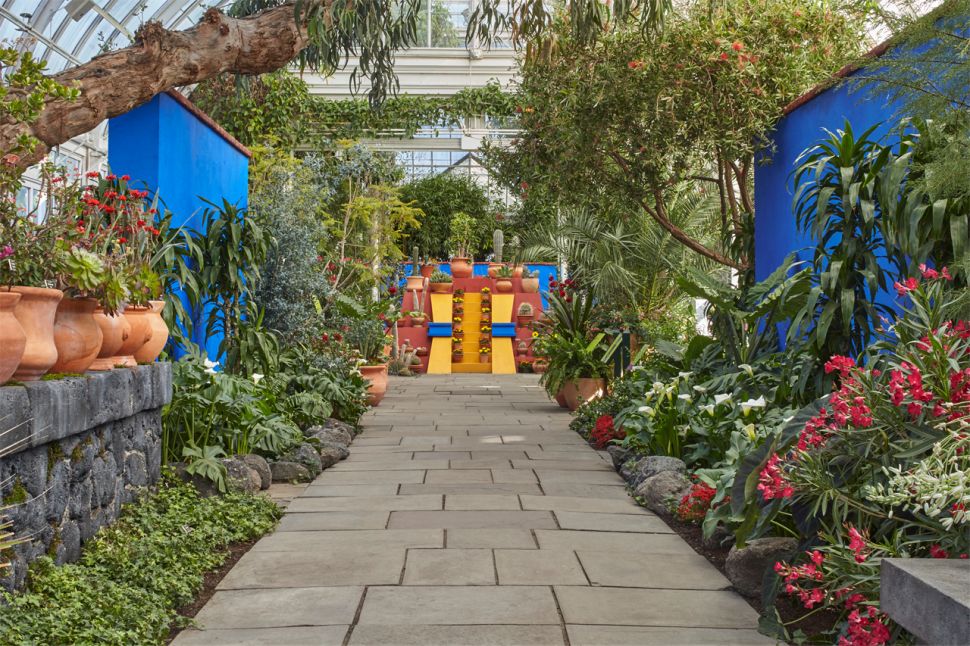