GLEN ROCK – Backed by a platoon of labor leaders and a posse of Bergen Democratic politicians, Jersey City Mayor Steve Fulop rode into the Glen Rock train station on Tuesday to decry a proposed nine percent increase in NJ Transit fares that would be accompanied by service cuts. Fulop then also made sure to slash New Jersey Governor Chris Christie on the day that the Garden State Republican announced his 2016 presidential bid with words that cut close to the bone.

“Soon, the rest of the country will be exposed to the governor’s track record beyond YouTube sound bites, and they will see credit downgrades, failed job growth and continued tax increases like this one,” said Fulop, a potential 2017 Democratic gubernatorial candidate, at a rally in the Bergen County borough, part of a wider tour around New Jersey to fight against what a recently-created a non-profit organization, called “Fight the Hike,” designed to raise awareness of the latest NJ Transit fare hike, asserts is essentially a Christie-created proposed tax increase. “It will be a tough record for him to run on.”

Fulop was joined by local Democratic legislators such as state Senator Bob Gordon (D-38) and state Assemblymen Tim Eustace (D-38) and Joseph Lagana (D-38), as well as Bergen County Freeholders Tracy Zur and Steve Tanelli, who all expressed their ire at the proposed fair hike.

But it was labor leader Ray Greaves, chairman of the New Jersey Amalgamated Transit Union (ATU) Statewide Council, whose words were the most rife with rage when it came to the general political situation in New Jersey on the day that Governor Christie finally declared his intentions to run for President.

“We have a governor in New Jersey that is more concerned about issues in Wisconsin, Iowa and New Hampshire than he is about New Jersey,” said Greaves, listing a few of the key presidential primary states. “[Christie] said months ago said that he was going to put everything on the table when it came to the Transportation Trust Fund, and to this day the governor has not proposed one fix for the fund. Now, once again, NJ Transit is going to be raising taxes on those that can least afford a tax hike, like working families and the middle class, people who are struggling to make ends meet now.

“I think Christie should resign. I think he should be put in jail, to be honest with you,” added Greaves in response to a PolitickerNJ inquiry about what Christie’s immediate future should be, referring to the Bridgegate scandal, among other problems. “It’s not only that he’s not here. It’s also his policies which make it harder and harder for working families to live here in the state of New Jersey. Christie should go. And I look forward to him running for President, because the ATU will be following him all over the country. We will let the rest of the country know what a loser we have in a governor, and what a failed governor he was here in the state of New Jersey.” 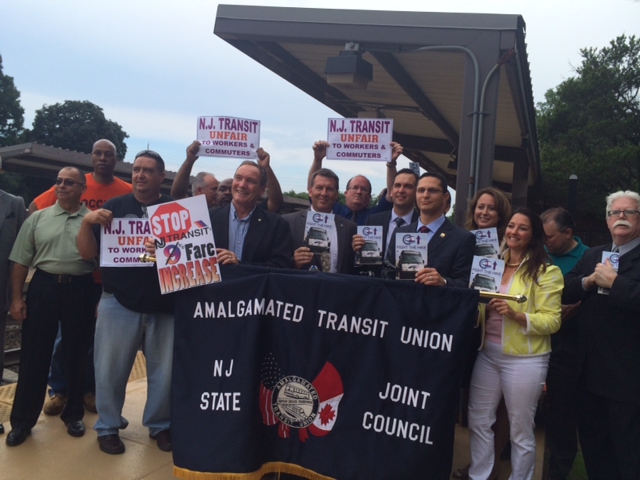