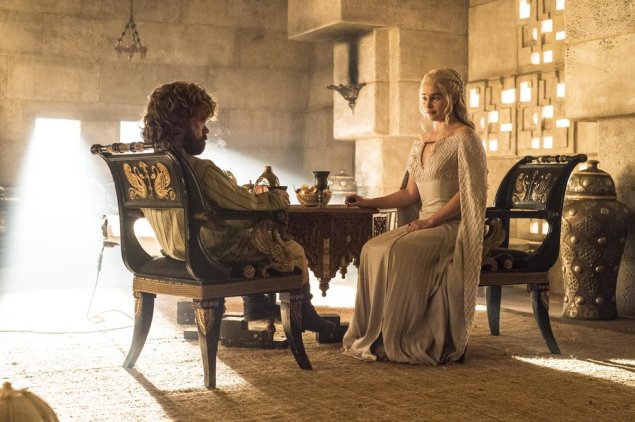 Vinnie: Well then. That was by far the coolest episode of The Walking Dead I’ve ever seen.

Drew: Leave it to Game of Thrones, a show where the threat of ice zombies is usually the least of anyone’s problems, to rejuvenate the “mindless hoards” archetype. No, these aren’t just braaaaains-eating; unfeeling shells of former humans. They are straight FIELD STRATEGISTS and “lemming zombies” (as one of the showrunners put it in his interview after the show–we’re all watching those, right? Because they are IMPORTANT) who can straight nose-dive off a cliff and then pull themselves up and go straight at you again.

These White Walkers (nee, Others, until Lost got there first) so break the conventions of zombie-ism it doesn’t feel right to use that term to describe them. First of all, zombies usually transmit over bites: it looked like these sword-wielding battle zombies could count on their general to just…raise his arms and turn all the dead people into ice zombies? Which is cool, except…do White Walkers need a lot of newbies running around? What are they collecting this army for? Winter has happened before (once for ten years!) and yet the Walkers are convening to (seemingly) mount an attack on Castle Black, which makes me think this show has just been one long infomercial by Al Gore about the dangers of melting polar ice captains of darkness. #AnInconvenientWesteros

Vinnie: So I guess we should talk about the back half of this episode, because Game of Thrones did one of those things where it front-loads an episode with discussions and debates and whispers in dark places, then it spends the last twenty minutes reminding you that “hey, we have that HBO fuck-you money” and put on a damn great set piece.

Drew: I legit had to turn on the closed captioning to hear anything Tyrion or Cersei said. I liked that he stuck up for Jorah but not really. I love that Tyrion immediately fills that hole in her strategist department. If this show spun off with Veep, it would be called “Mommy of Dragons Works Bill!” And then-kindly but fairly, re-banished Jorah, Dany is out of strategists, so this is all he’s got. Also, are there zero Dothraki soldiers anymore?

Vinnie: And they had to have known what everyone would be thinking when Sam told Olly that Jon “always comes back.” Come on, Sam. I know you just got some of that Wildling lovin’ you so desperately crave but don’t you know saying that is the same as just murdering someone yourself in the Game of Thrones universe.

What I’m saying is, the whole mess at Hardhome basically happened because Sam jinxed it.

Thanks a lot Sam.

Drew: I’ve got this theory (WE LOVE THEORIES, AND WE’VE READ THE BOOKS!) about the show totally diverging from the books this season as they and the books become these two parallel narratives. Both lead to the same showdown, since the creators of Game of Thrones impressed George R.R. Home Skillet by correctly guessing the ending of the series. And with all ARR-ARR’s involvement in the series–producing, writing, rolling around in his Scrooge McDuck money bank vault pool –I think he’s signed off on the show splitting from the book.

So just get ready for a *PREDICTION SPOILER?* Okay, so raise your hands if you KNOW Stannis is going to die soon. Sorry, you boring lug, but it took five seasons to make you into a semi-believable character, and it was with  a heartfelt “Girl your stone face is amazing, just the way you are.” Now we just love him. He is our new Sean Bean. And Bronn iis going to lose his eye as he merges with Arys_Oakheart character, the way they did Jorah’s and Cunningham’s did.

Vinnie: Yeah, but thoughts on Hardhome. It’s funny that anytime the White Walkers decide to show up with the extras from Jason and the Argonauts, it’s really really cool to watch but it does kind of make everything else on this show look…pointless? Does that make sense?

Um, people? There is a constantly growing army of ICE ZOMBIES just sort of sauntering towards you as we speak, hellbent on turning YOU into aforementioned ice zombie, and they don’t really give two blue-eyed shits whether you’re from the North, King’s Landing, Dorne or fucking Canada or whatever. You are all going to die, and then come back to life to chew off your family’s face. Have fun with your squabbling.

Drew: Sure, but you can make the same argument that because there is war and horror and famine in other countries IRL, that’s what we think about all the time. It’s not great news, sure, but it doesn’t have bearing on your current plans of a three day opium binge. (I’m guessing that’s where Varys is. Man deserves a VACATION.)

The point is: bad shit happens everywhere–and when it gets close enough to you, you’ll find unlikely allies. Like the Thenn and Jon and Tormund had time to act as a professional Ren Faire sword-fighting Cosplayer ?.

Just confess Cersei, to that thing you did, and are now getting punished by those dudes you hired to punish other people. God, it’s so brilliant to help these days from that new religious cult down the street! They are so pleasant! Cersei is already degraded to licking water off the floor of her prison cell, so sure, she’ll forget all about the Stark thing just as soon as she gets her shit together and see that EARLY FALL is COMING. leather pants? Maybe a cardigan. WAIT WHY ARE WE TALKING ABOUT LAYERING? ICE ZOMBIES, ICE ZOMBIES.

Also, it doesn’t look pointless because it looks like SUCH a different world than the one the ice zombies come. Like, the not hitting Mereen anytime soon? Dorne?

But that can wait. Literally. We don’t have time to talk about the hypothetical Dornish reaction to seeing Olaf’s jacked up uncle, General William Dorothy Frostbite. Let’s talk about how there was a river beyond the wall? That zombie party?

Vinnie: As for the whole scene itself, yowza those were some visuals. Is it wrong of me to say I was so much more worried about that giant than I was about Jon? They’re not going to kill Jon. I’m pretty sure Kit Harrington’s hair itself has an 8 season contract, regardless of what happens in the books.

Also, tell me your favorite moment in this show’s history, and then tell me why it’s this one. 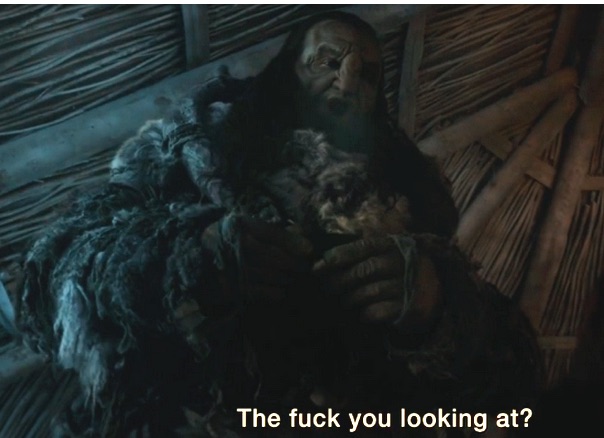 Drew: I was like “Does every time something you were told turn out to be true just get you super surprised, like you are hearing the information for the first time?”

Vinnie: A few more things, in no particular order: 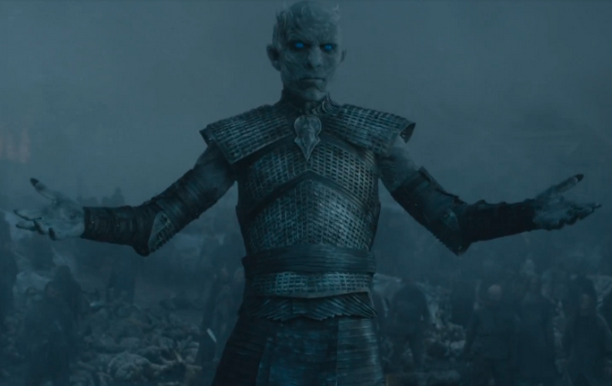 Come at me, Snow.

Drew: Incorrect opinion. Dumb dumb Jon Snow. Even the wildlings had to take a moment to talk about how pretty he is, because there are the same pebbles in this kid’s head as James from Twin Peaks. He might be good at Home Alone-ing a very tall ice wall, and yeah, he fights pretty well. But there’s no concept of strategy. It’s all “Wait, so…we just wait here till Stannis comes back? “Let’s take a trip over the wall to visit a strange ice shore (?) up beyond the wall, because I’ve decided I’m the Claire Underwood of this show. I’m ambassador now, bitches!

Vinnie: So yeah, there were other things this episode, I suppose. Let’s run them down. Tyrion absolutely nailed his interview for the summer internship program in Mereen as Dany’s advisor. Congrats!

Also, remember when I joked that Jorah is going to keep putting himself into increasingly awful ungodly positions just for the chance to be close to Daenerys? Wellllllllllllll, that’s actually happening.

There’s some correlation to be made between the Lying Game that Arya has to play in the House of Black and White and the Septa that keeps telling Cersei to confess. I mean, both things involve asking someone to “tell the truth” and if they fail….WHACK they get the stick. So what are they trying to highlight? The ingrained nature of violence in all religions? The complex meaning of “the truth” in a world of liars? The effectiveness or lack thereof of a whacking stick as interview tactic? Yeah. Yeah let’s go with the third one. 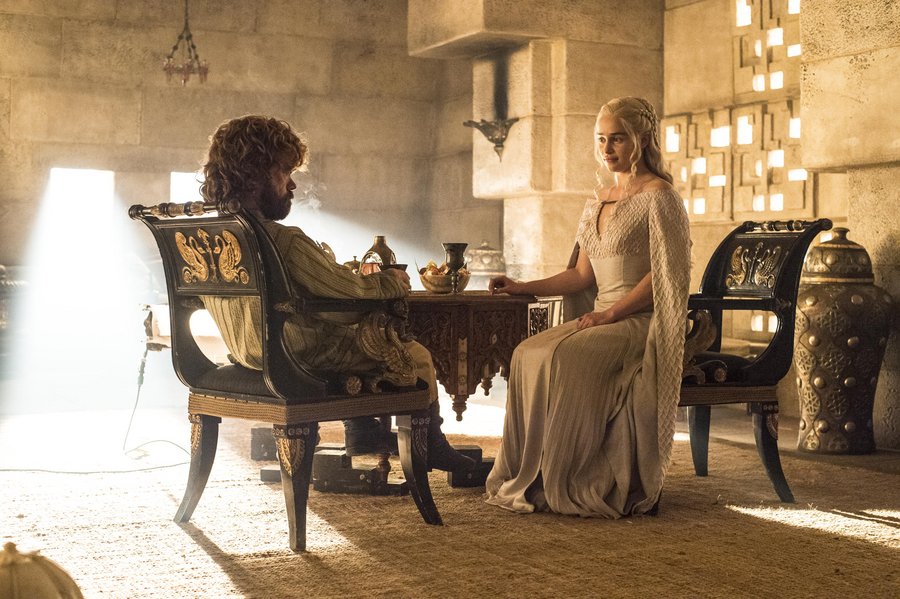