Drew: Do….do you think Game of Thrones has finally revealed itself to be a TOTALLY different narrative than the books this episode? Like, I want to hear some Vinnie-esque show theorizing on this taking place in a wormhole away from A Song of Fire and Ice. Like, is there some fan site out there that’s able to pinpoint the first example of the show deviating from the book, and extrapolating that everything that’s gone BANANAGRAMS since is because of the Butterfly Effect caused by Arya being good at archery or Joffrey being 16 instead of 12, or some shit?

Drew: That hat looks great on you. Feel free to sing this entire next part to Mycroft Holmes, who cannot even with you right now.

Vinnie: When Davos finds Shireen in the tent (you know, before she proved that stone is in fact flammable) he asks her what’s she’s reading. She replies “oh, Dance with Dragons.”

Drew: I was all like “Wait, is THAT what Dance of Dragons is about?” (Also, the part where Davos and Shireen share a good chuckle over the grim fate of some fucking knight who tried to trick a dragon with a mirror shield like the doctor in Don Quixote? No mas.)

Vinnie: So you’re saying Shireen deserved everything she got. Right. Let the record show that is what Drew thinks.

Drew: I’m saying filicide is not a good look on Stannis, but it’s especially shocking because where the hell did THAT character trait come from? Has he gone insane? And as no one, can I just say that I’m starting to find it a hindrance to assume I know what’s coming next? “No way are they going to kill Shireen because that never happens in the WAIT WHAT?? THAT DOESN’T EVEN MAKE SENSE IN CONTEXT!! MORALE IS GOING TO PLUMMET, YOU DUMMY!”

Vinnie: I actually like the idea that Stannis has just simply gone insane. Although I always want that to be the answer, on any show. If I ever wrote a show every character would eventually go insane for absolutely no reason, and it would be set in the Batman universe, and it would be called Gotham.

But anywho, It’s funny, just this weekend I told someone this scalding dragon-fire hot take: this is my favorite season of Game of Thrones, because for once I’m actually assuming I don’t know what’s coming next. I didn’t even think the Red Wedding was that exciting, show-wise. “Oh look, that thing I read happened.” So thumbs up for being surprised.

On the flip side, I like to think I’m not really bothered or grossed out or even made uncomfortable easily. I watched almost all the seasons of True Blood, which afforded me such in depth looks at Alexander Skarsgard’s naked backside I’m pretty sure I could describe the back of his teeth. But I found out tonight that my limit is just constant, unwavering little girl screams.

Drew: One time my dog’s eyeball came partly out of her socket when a boxer hit her on the side of the head, and she screamed like that. (I saved her eye but that is gruesome and for another time.) Anyway, it was definitely PTSD-level scarring hearing human girl torture screams. (Oh how I long for the days when Theon was the only dude getting tortured gruesomely in every episode!)

I guess the one thing about Stannis is that he was boring, but never truly irredeemable, before this episode. Now he’s operating out of the same–if not way, way worse–morally bankrupt mindset as the Boltons. Oh wait, the Boltons never killed their only living heir? Because that’s literally SO INSANE that not even Roose Bolton or Cersei or anyone on this show, really, has ever attempted to sever their family tree. (Okay, maybe Viserys Targaryen, but come on. That dude got all his dad’s crazy.)

Vinnie: Yeah, speaking of Boltons, Ramsay totally said Feast for Crows last week, so my alternate dimension theory is checking out more and more but NO NO, we’re not here for mindless theorizing we’re here to discuss the horrible burning of a small child and some occasionally shoddy-looking CGI dragon flying.

Drew: That dragon was awesome until the final shot of Dany flying away like she’s got some Neverending Story to attend. (Fan theory: is Dany the Childlike Empress?)

Vinnie: I mean, in like 3-6 months Jorah is going to be this guy.

Drew: Speaking of Jorah, I loved this scene the first time around when it was called Gladiator. JK, that was a “bit.” I hated Gladiator, because it lacked the spillover Eyes Wide Shut extras just popping up in the Colosseum. And the part with the dragons. Or the part where Ser FriendZone totally gets to touch Dany’s hand–although, with his Greyscale, that’s probably the worst idea humanly possible–before she just straight DIPS and leaves her whole kingdom/trusted council in the middle of a battle. Haha, peace motherfuckers! See you all in Dorne, or wherever the hell I’m going! DRAGON MIC DROP!

And I’ll just end my Shireen rant on this note: what was the tactical move here? That burning a child alive would signal to the Boltons that the Baratheons were willing to burn each other up at the stake instead of storming the gate? Was this some kind of shock and awe technique? Because honestly, Melisandre, you’ve got a looooow batting average at this point.

You got Stannis’ ghost baby to kill Renly…and that’s about it. Now Renly is Charles Manson  and you haven’t done jackshit since. Not at the Battle of Blackwater, not helping Jon recruit wildlings during last week’s “Hardhome,” not during any of this time when Stannis has been plodding up and down the equivalent of Amtrak’s Northeast Corridor just trying to quell whatever bullshit he comes across, never getting any closer–literally or figuratively–to the Iron Throne. My one hope is that they are going to reveal that Shireen’s death was actually the Mance Rayder decoy burning from the books. Maybe she’s still alive. Maybe the mom was Shireen and that’s why she suddenly started running toward her mother on the stake? I mean, Mrs. Baratheon suddenly seemed AWFULLY sympathetic for someone who has been legit crazy even before the Ravenous-y mindset of wintering in Winterfell became trendy.

Vinnie: First of all, as a commuter very familiar with the Northeast Corridor, I would burn a small child daily just to stop delays for like three days a week.

But the thing with Melisandre, at least where Blackwater is concerned, is that up until then Stannis’ tactic was all Melisandre all the time. And the only reason he didn’t bring her to to Blackwater was so he could say he won a victory without his witchy woman. And then, well, then he lost horribly and his entire army fled because they thought they saw a ghost, and most of Davos’ sons died. It was really just an unfortunate day all around.

If I understand Stannis as much as I obviously assume I do, I like to think it weighs heavy on his stubborn ass that most of his victories (okay, his one victory) came with the shadow baby assist from Big Red. So, when he burns his only daughter it’s just as hard for him to say “okay FINE, we’re going back to Plan A” than it is to, well, you know, light his only daughter on fire. Although that was probably pretty tough, too.

Drew: Everyone on the show seems a little lost at this point. It’s become the second act of Into the Woods: they’ve lost their narrator and don’t really know where their fairytale is supposed to go. Next week’s shot of Daario, Tyrion and Jorah just sitting on the steps, waiting for something to happen, is kind of where we’re at right now. Or the fact that Arya can’t seem to pull the trigger on killing  Meryn Trant, even though that scene was set up in a way where you know she’s going to be presented to him, and she has the poison on her, and GODDAMNIT, THIS IS LIKE THE RICIN IN BREAKING BAD ALL OVER AGAIN. And yet, none of this aimlessness seems pointless: just the opposite. This season is leagues beyond the detouring of the fourth book, and basically skipped right through all that bullshit with Young Griff, Ser Arys Oakheart, Sam going to the Citadel and running into Arya, Tyrion getting paired up with another small person, etc., Why?

Vinnie: I think it’s because, and here’s another hot take for you, a book is different from a TV show. And pretty much every change made has been to make Game of Thrones a more interesting TV show, slow, plodding classic GRRM book plot be damned (still love you George but goddamn, stop describing six different kinds of meat pies and get to the good stuff). Like the fighting pit scene for instance. Instead of Dany just sort of sitting there uncomfortably while my boy Belwas eats some poisoned locusts, we get JORAH v. GOT COSPLAYERS FIGHT followed by JORAH and DAARIO V. ALL THE HARPIES FIGHT. It felt chaotic and confusing and definitely added to the eventual Drogon entrance.

Another book change: Just as I said “Dany’s husband whatshisnuts is totally in on this” he gets pretty brutally stabbed. To death? Uncertain. To too much owch to be in on it? Definitely.

Another ANOTHER book change: how hard are we all shipping Tyrion and Missandei now? I seen you two holding hands. (Sorry Grey Worm.)

Drew: Sorry, Missandei/Tyrion slashfic. For me it was all about Sir FriendZone becoming #1 at touching Dany this week, followed in no close second with a tied Daario and Hizdahr zo Loraq, who did the world’s shittiest job of protecting Dany because they were too busy playing Primetime Pundits on Mereen’s national broadcasting Colosseum. Daario, you dumb slut, you’ve definitely outstayed your welcome whilst arguing over muscle or whatever. Begone with ye! 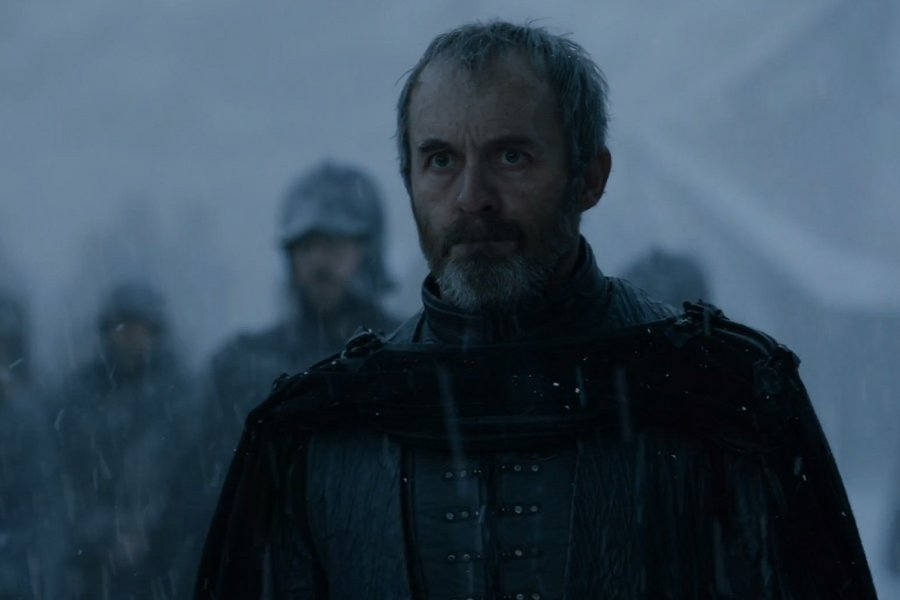