Drew: With so much talk about spoiler culture and the way Game of Thrones has subverted it this season, I really loved how Twitter ruined the ending of the show where it turns out to be all about ethics in gaming journalism. 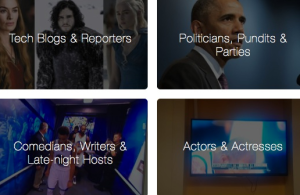 Vinnie: Writing my script set in an alternate universe where the Night’s Watch are Tech Bloggers, and they say “For the Apple Watch” as they each stab Jon Snow.

Drew: So! This was a fun one! Everyone who deserved to gets to lead a long and happy life, and the wicked are punished thoroughly and has to do endure either a walk of shame and/or the most murder-y fraternity hazing in human history. Just for those keeping count at home, Stannis has put his entire branch of the family tree out of commission…which…at least…actually, no. No, I do not buy this Bizarro Stannis storyline at all. Like, if the end is just him nobling dying by Brienne’s hand, what was the POINT? I couldn’t believe he ACTUALLY killed Shireen and wasn’t Mance Rayder’d. (I mean, obviously, Mance Rayder from A Song of Fire and Ice, not from the show. Boy, it turns out those bragging rights have soured very quickly.)

Drew: Vinnie, can you please find a screencap of that as well? Thank you SO MUCH, you are basically my Dothrakian army! And by that I mean my savior and/or viral marketing for the next season of True Detective time spirals! (June 22nd, y’all!)

Vinnie: Then, then, then Stannis’ army engaged Ramsay’s in the “Battle of the We Spent Our Budget on the Dragons.” Which is fine, whatever, not every battle can be Hardhome (imagine if it was, though?) But then Brienne, who we learn has actually been spending every second looking for that candle and then MISSES IT WHEN SANSA FINALLY LIGHTS IT, just happens to come upon the one dude she’s looking for in the woods and…kills him. Off-screen. Womp Womp.

Drew: Brienne, taking a little detour in her last pledge to protect Sansa to go kill the guy who killed the second-to-last person she promised to protect. Not even a “heat of the moment, got to go avenge Renly’s murder!” thing. Renly is over it. Renly is Manson. And this is why Brienne can’t be a knight. Not because she’s a woman, but because she’s terrible about prioritizing. That, and she’s sworn herself to every family in Westeros at this point.

Vinnie: In the big show-ending fight between all the families of Westeros, there is Brienne in the corner having a nervous breakdown because she swore to protect everyone and no one at the same time.

Drew: Jon Snow was stabbed in a very orderly manner by the Night’s Watch, who all waited their turn and were comparatively civil about the whole process, considering what they did to the last guy.

Vinnie: I’m sorry, I know that last scene was *super serious* and brutal and we’re all going to miss Jon (if he’s even dead…he looked pretty dead?) but man, the only thing I could think about during that whole thing was this scene from Airplane.

For an assassination, everyone was just so patient about it. How do you think they decided on order? Drew straws? Do you think they guy that drew last stab was like “ah, I’m totally just gonna’ be stabbing a dead guy at that point?”

Drew: Airplane or just like, a state school. I bet every Phi Delta Si or whatever in the world chugged a beer to hide their #BroTears when Jon and Sam hugged it out, bitches. (RIP, Johnny Bravo, who died, I’m assuming, in the Entourage movie.)

(Sorry, my head is in a dark place right now.)

Vinnie: Wasn’t the timing kind of convenient that Sam made this decision to go become a maester right after confirmation that an army of undead killing machines is advancing toward The Wall? Like, “That’s very valuable information, Jon. Have I mentioned I’m travelling as far as fucking possible away from here today?”

Drew: Was it just me, or was tonight’s episode a little TOO on the nose? Like that nun whose job it is to yell SHAME at Cersei. Which was another super intense moment that I kept disassociating from by imagining Monty Python’s “Bring out your dead!” bit from Holy Grail. Like…that’s a little much. We get it: (1) Jon Snow + (1) Cersei = (1) Justine Sacco book.  Did I get that math right? My Valerian is a little nostril.

(HEY VINNIE PLEASE FIND A GIF OF THAT ASAP, THANKS!)

Vinnie: Couldn’t find requested GIF, so filling in with a reminder of how amazing a trip it is to type “Peter Dinklage GIF” into Google.

Re: the TOO on the nose thing, you mean how they had Meryn Trant be not only a murderous asshole AND a child molester but also he gets off on beating little girls with a stick? (Maybe HE should have joined the faceless men…all they do is beat little girls with sticks). Like, we thought he deserved to die like four seasons ago. We thought he REALLY deserved to die like two seasons ago. By the time Arya popped that face off and stabbed him in the eye it was like “well, yeah.”

Drew: Okay, this is bumming me out. Let’s talk about the WINNERS of the evening! Like, Tyrion is in suuuuuch a good place right now. He’s really doing well…at least compared to last season. Though I don’t know how awesome it will be a “little man” placeholder for the invading queen during Mereeen’s rebel insurgence. I made several great comments that likened a couple Game of Thrones situations to the Gulf War and also the Iraq one tonight, but they didn’t go over great in my household because I refuse to learn about politics that don’t involve dragons.

Vinnie: Although how awkward is Jorah and Daario’s buddy road trip going to be? After a little awkward silence Jorah is subtly going to ask if Daario thinks Dany likes anyone in Mereen “more than a friend.” Daario’s just going to laugh and deep down Jorah’s going to know what that means.

Drew: Who else is doing okay? I guess Cersei regained a bit of her dignity there at the end, as she was sweeped up by her new big zombie bodyguard. You know what, Cersei? You earned it!

Vinnie: The only real injustice in this world is that Andre the Giant is not alive to play Cersei’s new bodyguard, and the show couldn’t recreate this image.

Drew: Seems like the Sand Snakes are also doing just fine with their elaborate, bullshit poison move. God, why do they just keep poisoning the Lannister children? Don’t they know that setting them on fire is the new black?

Vinnie: Listen, I don’t want to keep pushing this idea that Game of Thrones is secretly filled with Batman villains (lol yes I do), but that was a total Poison Ivy move from Ellaria.

Drew: Tyler Coates wanted me to point out that Decider already kneeeew thaaaaat.

Vinnie: Well yeah, true, they happened to look at IMDB before I did but at no point did Decider go back through years of encyclopedic Batman knowledge and one year of high school Latin to create a completely new word to support their theory. Points, me.

Drew: Yes, to you, all the points. But ONLY because you are a dude. If you were a lady, the points would be awarded based on who managed to impregnate your human nugget torso, which is what I believe Myranda was implying Ramsay would do to Sansa. I kind of loved how Theon and Sansa just said “Fuck it” and pulled a Thelma and Very Smelly Louise.

Vinnie: I kind of loved that Sansa was sneaking around as if her Darth Maul hood was covering her face at all. Note to Sansa: like three other people in the Bolton camp have anything close to resembling a pretty face. You stick out.

Drew:I will say, this Cersei stuff, I think the show has really begun to explore what it’s doing with its gratuitous sexism. Which is a little hard to watch, as a viewer. It’s like the guy at the party yelling, “You guys, I thiiiiiiiink I might be drunk?”

The way Cersei’s nakedness is at first titillating–because full frontal, come on–and then self-righteous (look at how she’s maintaining her queenly demeanor!) before becoming totally disturbing in its visceral vulnerability is like watching the life cycle of the show’s rape scenes as they’ve progressed from season to season. And I think that’s a good thing. The only part I don’t like is the obvious finger-wagging parallel the show is trying to make between people who would watch something like the Walk of Shame for entertainment, and uh…all HBO subscribers.

Vinnie: Does that make Benioff/Weiss/Martin some sort of combined High Sparrow? Does that explain why there was a lady behind me during the entire episode screaming SHAME and ringing a bell?

Oh, no, I’m in BedStuy. That lady…that lady is just crazy.

Vinnie: YEAH, she’s just…blind. Blind, because she flipped through the dead face flipbook too fast. I think? I’m not even sure what’s going on over there in Braavos anymore but hey, another season of Game of Thrones down! And it only caused like four complete upheavals of society! See everyone next year!

Except Arya. Arya won’t see anything. Because of all the dead faces. 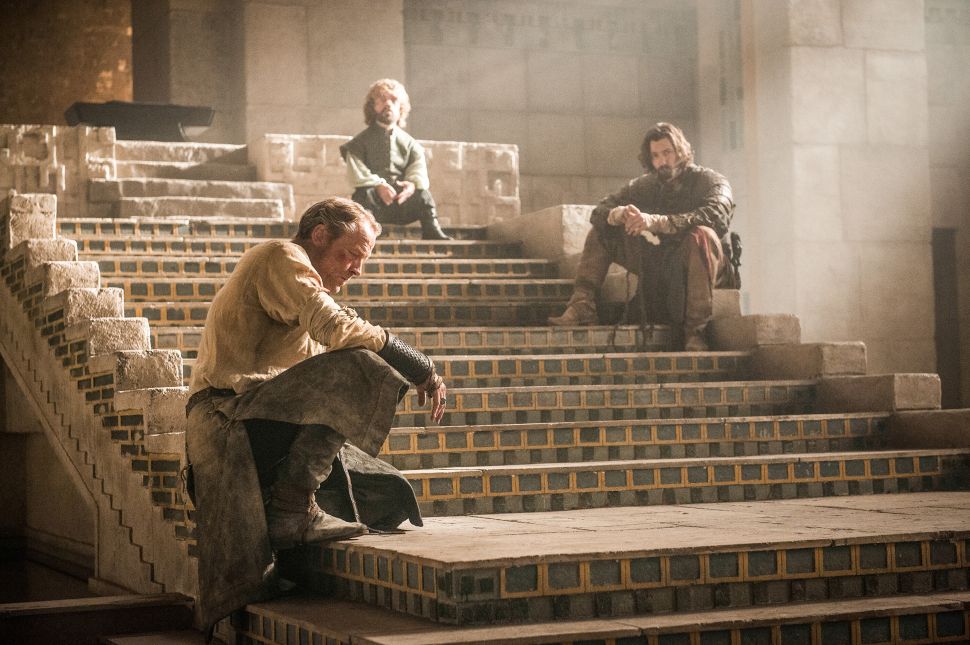