I’ve owned and operated a Game of Thrones blog since before the show existed. I co-authored the official annotated version of A Game of Thrones, the first namesake volume of George R.R. Martin’s source novel series A Song of Ice and Fire, together with the series’ editor and one of Martin’s closest collaborators. Martin himself recommended my site as one of five places on the Internet better suited for arguing about the show than his own blog. I got my first gig as a television critic based solely on the strength of the writing about the show and the books I’d done on my own for free. I have the war cry of the Golden Company, a mercenary army from the novels that hasn’t even shown up on the screen yet, tattooed on my right forearm. I am, for lack of a better phrase, a world-renowned Westeros expert. And when Game of Thrones’ season five finale airs this Sunday, I have no idea what the fuck is going to happen.

As such, I’m sailing through the same black as every book reader out there. While Martin’s slow progress in writing the seven-part series’ final two installments continues at its usual winter-is-coming pace, the adaptation has pretty much caught up with its source material, and this unprecedented situation in nerd-culture history is one showrunners David Benioff and Dan Weiss have taken full advantage of. This season has seen them depart from the events of the books in increasingly dramatic ways, culminating in last week’s brutal burning of Princess Shireen Baratheon by her own father, King Stannis. Search through the thousands and thousands of published pages all you like — you won’t find this anywhere. Which means that after years of foreknowledge of the show’s major and minor twists and turns — from Ned’s beheading to the Red Wedding — we in the book-reading elite are now in the same boat as the so-called Unsullied, the viewers whose sole experience of the story starts with the appearance of the HBO logo on the screen.

Our cluelessness extends far beyond Shireen’s sacrifice. The horror of Sansa Stark’s wedding night with Ramsay Bolton. Brienne of Tarth’s trip to Winterfell. The long-awaited meeting of the Dragon and the Imp, Daenerys Targaryen and Tyrion Lannister. Jaime and Bronn’s Excellent Dornish Adventure. Ellaria Sand’s quest for vengeance. Loras Tyrell’s arrest for indecency. Jorah Mormont’s patient-zero status in a potential greyscale plague. Jon Snow’s battle against the White Walkers and their walking-dead army at Hardhome. It’s all as new and unknown to even the most dedicated reader as Dany’s dragons when she hatched them in her husband’s funeral pyre…and it’s every bit as glorious.

Now I get to feel all the nervous anticipation, stomach-churning dread, and jaw-on-the-floor shock everyone else does each Sunday at nine—or that I did, for that matter, every time I sat down to watch new episodes of Breaking Bad or Mad Men or The Sopranos or any other seminal New Golden Age drama you’d care to name. Much has been made of the excesses of spoiler culture, and complaints about the constant demand that not so much as a peep about the plot be uttered in advance of a viewer’s initial encounter with it are thick on the critical ground. But deciding what to reveal and when to reveal it is a core component of narrative fiction, every bit as deliberate and valid an aesthetic choice as the casting or cinematography or score — doubly so for a show that derives as much of its artistic heat from spectacle and shock as Game of Thrones does. Only now that the TV version has jettisoned its rocket-booster books and truly taken off, in other words, are book readers like myself genuinely seeing the show the way it was meant to be seen.

In practical terms, this is nerve-wracking as all hell. I greeted the ominous avalanche that signaled the arrival of the army of the dead with the same what-fresh-hell-is-this bewilderment as Lord Snow. I watched the White Wedding of Sansa and Ramsay with a mounting mix of queasy repulsion and vain hope that the coming catastrophe could be avoided. And by the time poor Princess Shireen took her long walk to a tall stake in the snow after an episode full of foreshadowing and fakeouts, I felt like I was being marched to the flames along with her. On the flipside, I got to witness the big When-Dany-Met-Tyrion moment with its full holy-shit power preserved. This is a show that’s all bass and treble — as Cersei put it, “you win or you die; there is no middle ground” — and I feel like I’m hearing it for the first time.

And what is such a sensation if not a reprise of how stunning the series felt when I first read it? I picked up A Game of Thrones on the strength of the description bandied about when HBO first announced their intention to adapt it: “The Sopranos with swords.” While that volume’s single biggest shock, the death of Eddard Stark, had been spoiled for me by a well-meaning coworker who assumed that a well-respected nerd about town like myself had to have read the series already, all the other big moments, from Jaime tossing little boy Bran out the window to the slaughter of the Starks at the Red Wedding, hit me like a fucking freight train. Indeed, the RW was so upsetting to me that I actually went back to the beginning of the chapter to read it again, convinced that since what I thought I’d read couldn’t possibly have happened that I must have made some mistake. When, instead, my fears were confirmed, I literally lost sleep over it. No wonder that when my infant daughter spent six weeks in neonatal intensive care back in 2011, I started an A Song of Ice and Fire blog as a way of distracting myself from the real world: The one Martin had created was nearly as captivating. Now I feel like I’ve been captured all over again.

Many of my fellow maesters of the printed page don’t share my delight. They find the changes from the books too bold, the characters too alienated from their antecedents, the possibility that the show’s new maneuvers are in fact spoiling stuff Martin simply hasn’t gotten around to publishing yet too infuriating. I get that. I also don’t give a damn. Game of Thrones has given us a gift as rare as Dany’s dragon eggs and as unexpected as Ser Jorah showing up in a gladiator pit to plop Tyrion Lannister into the Khaleesi’s lap. It’s the gift of discovering the same great story twice — of encountering the same basic characters and concepts we’ve come to care about in a new form that restores their novelty, their originality, their power to surprise. Like Jon Snow, I know nothing. I wouldn’t have it any other way. 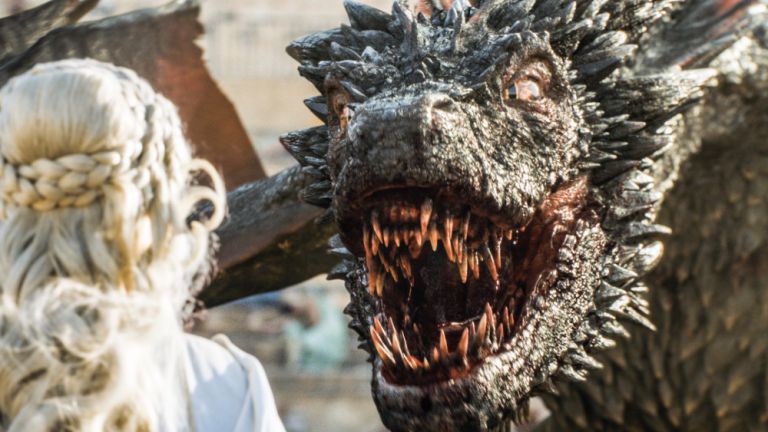