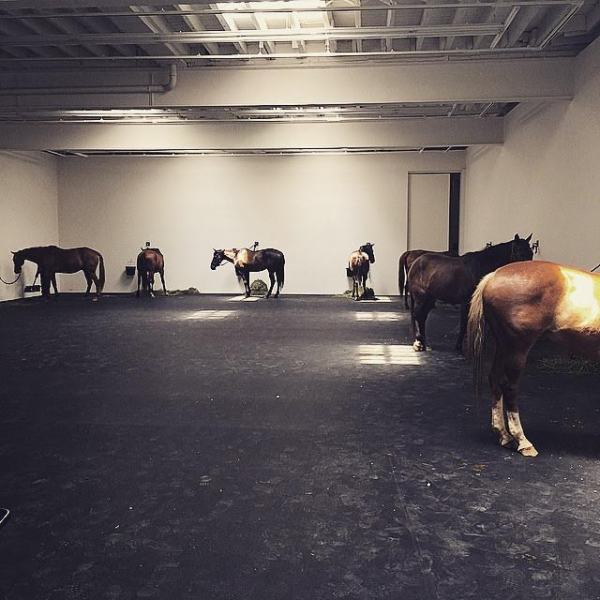 While its true that Gavin Brown’s Enterprise is ditching its Greenwich Village digs for hipper(?) Harlem, the pioneering gallery is going out with a bang. Yesterday marked the art dealer’s grand finale in his long-lived space: the opening of the first United States re-creation of Jannis Kounellis’ Untitled (12 Horses), an installation that involves 12 live horses.

What do horses do in this work you ask? Why, what they’d do otherwise, pretty much: eat, snort and poop.

The post-Minimalist work was first exhibited during the Arte Povera period in Rome. Mr. Kounellis, Greek-born, was an active member of the Arte Povera movement, a style in 1960s Italy that used common, seemingly worthless objects to create a fusion of Minimalism and performance art.

Restaged five times in Europe since its 1969 debut, the original work featured 12 horses harnessed to the walls of a Roman garage, and little else, as The New York Times reported.

Mr. Brown has paired Mr. Kounellis’ piece with installation and film by Rirkrit Tiravanija and Elaine Sturtevant; his reincarnation of the iconic work seems to have done justice to the original.

The horses’ day starts around 10 a.m., when they are ushered into the space and tethered to the wall, and they spend the day there. At 6 p.m. they are taken to a local stable, where they spend the night.

Mr. Tiravanija, for his part, cooks pork tacos, which are provided for free, around 6 p.m. each night. (For those not familiar, that’s kind of the Thai contemporary artist’s thing—he’s done more than one installation where he cooked for the audience). And from sundown to sunrise, Sturtevant’s 1972 reproduction of Andy Warhol’s film Empire—hours upon hours of slow-motion footage of the Empire State Building—is projected on one wall of the gallery.

Jerry Saltz says people are already instagramming their late night visits to the gallery to watch the film. 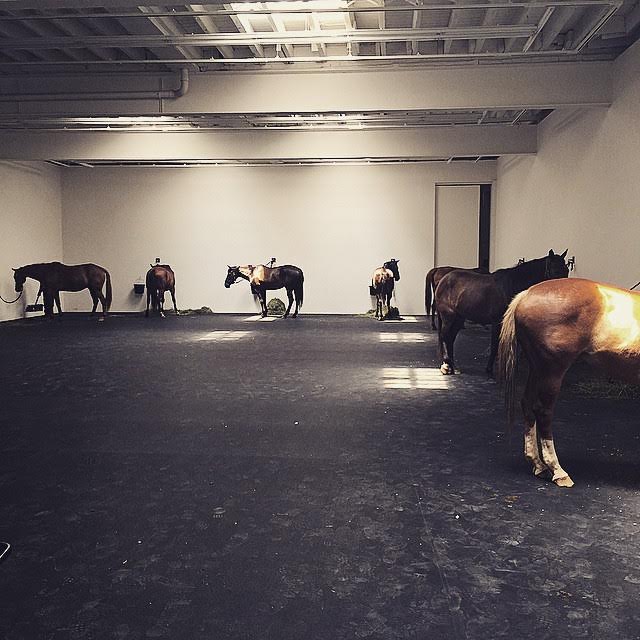