Fresco News wants to turn iPhone users on the street into photojournalists. The idea is this: if Fresco had enough users out in the world, news outlets would never be lacking for photos of an incident or an event. With its new product, Fresco Dispatch, announced today but going live on June 30, newsrooms can use the power of geolocation sensors to find users of the service nearby when news breaks.

Seventy-one news stations are signed on to participate in Fresco Dispatch. Stations will pay $700 per month for access to the network of Fresco users. The Fresco app will become a completely crowdsourced news source, with photos from news events as they happen around the world. With Dispatch, regular people will also become journalists.

“I had this really interesting meeting with a photo editor at the New York Times,” John H. Meyer, Fresco’s creator and founder, told The Observer in a phone interview. “I was bouncing around this idea with her, ‘what if we could get photos from our own users?’”

Fresco had needed to pivot. It couldn’t afford to pay for photos from newswires, but it needed more users in order to completely crowdsource images of the news. It needed something else to bring people in.

The company hopes that the chance to be part of Fresco Dispatch will do the trick. When news happens, newsrooms that have paid a subscription to Fresco Dispatch will be able to locate users on a map, near the scene in question, and offer them a payment to go to the site, snap a photo or video and turn it over to the newsroom. The images will be made using the Fresco app, which will use geolocation to verify that the user is at the right place.

Photos will be earn at least $10 and videos will at least $40, according to Meyer, who also said that Fresco will keep 20% of commissions. (We also interviewed the young, veteran iOS developer when he was first making the app.)

Adam Vogler, a freelance photographer in Missouri who has worked for some of the larger regional newspapers in the state, said in an email that he could get paid roughly $75-$150 for non-exclusive use of quick assignment photos like those described in Fresco.

Local news outlets get a constant stream of alerts about fires, car collisions, police incidents, ribbon cuttings and other potentially photo/video worthy events, Mr. Meyer explained. Sometimes they send their crews to the wrong scene and regret it later. Often, there aren’t enough crews for all the simultaneous events. How can they prioritize in a world of constrained media budgets?

Mr. Meyer’s pitch to local outlets is this: with Dispatch, a newsroom could make its best guess about where to send its own crews but hedge its bets with Fresco Dispatch and get images elsewhere. Meyer said that Fresco Dispatch is rolling out on a network of local TV stations in Florida, where the competition is fierce to be first to nearby stories. In some cases, Dispatch will enable them to get images even more quickly than if they sent a crew directly. Sometimes, users will just be much closer to news as it happens.

CNNiReport also invites users to be part of the channel’s news coverage in a related way.

The company has already shown this somewhat with its Social Dashboard. The dashboard is an automated system that hunts for photos on Twitter, verifies their authenticity (including double checking them against existing photos online) and then asks social media users for permission to share them with media partners. Another startup, Capture, works in a similar space.

Using this method, Fresco was able to get photos to one of the Florida TV stations, when it wanted to do a story on a pipe explosion in a Manhattan building in March. WFLA used Twitter images from Scott Westerfeld, among others. But images secured through social aren’t paid for; photographers receive credit and retain all rights to their work.

Mr. Westerfeld told The Observer via email that he wasn’t interested in payment for his news photos. He simply wanted an important story about a place he cared about to get reported. “In a strange way, being a citizen journalist gave me some helpful emotional distance that night. This was a blow everyone in this neighborhood–the physical damage, the deaths of two young men, and the thought that our landlords might not have our best interests in mind,” he wrote. “ It helped to displace those realizations with interviews and taking pictures.”

The sun is finally breaking through. But it's all smoke down here. pic.twitter.com/weEuNmHmiI

News organizations will pay $700 per month per outlet for access to Dispatch and the Social Dashboard.  The company has not received venture backing yet; it has been able to work through to this stage with media partners paying for access to a paid beta period.

Fresco is open to iOS users only, as of now.

Todd Wolfson, founder of the Media Mobilizing Project and author of Digital Rebellion: The Birth of the Cyber Left said in a phone interview that Fresco reminded him of a for-profit version of Indy Media, the now defunct grassroots organization he covered in his book.

Mr. Wolfson was of two minds about the startup’s business model.  “It takes advantage of the distributed network possibilities in what is a seemingly smart way,” he said.

But Wolfson also thinks professional journalists are important, so the service made him nervous. “Socially, for journalism as a profession it’s problematic,’ he said. 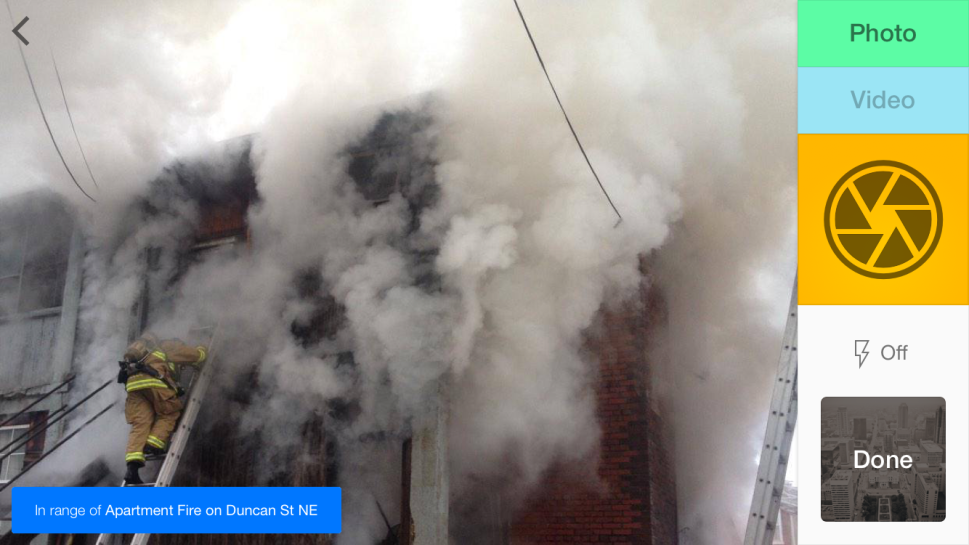