The grounds of Governors Ball were a sprawling swamp of collard-green grass. A malodorous, dank stench filled the air, a product of the heavy rains that fell during Friday’s installment of Governors Ball (Saturday was exponentially sunnier), mixed with the audience’s excessive weed-smoking.

The big picture of Saturday’s show? The different ways Gov Ball’s lineup both creatively distorted and tapped into the heart of electronic music. While lighting up overshadowed the festival’s vibe, groove and rhythm were being formulated in a great variety of ways throughout Randall’s Island.

Electronic music wasn’t the sole style on display Saturday. Photographer Nick Sullivan and I caught indie-prog band Moon Taxi at the Honda Stage when we got in a little after 3 p.m., and cult folkster Ryan Adams was jamming out at the same stage while we walked back across the Robert F. Kennedy Bridge. The dance-oriented artists made their impact during the span of time between Taxi and Adams.

From a ways back, we caught Marina & The Diamonds at the GovBallNYC stage. In the spirit of her latest album, Froot, out in March, Marina’s stage set-up included gigantic, neon fruits—the kinds that stupefy your grandpa as they light up the Mohegan Sun slot machines. Her sound mixed the baroque electro-funk of St. Vincent (who played Friday) and the luminescent, giddy pop of PC Music. With infectious tracks like “How To Be A Heartbreaker” and “Primadonna,” Marina was definitely the hookiest of the day.

We headed back to the GovBallNYC stage next for Little Dragon. They did woozy reggae on “Killing Me” and Kraftwerk-y/R&B crossover on “My Step.” Grueling minimalist house took over the second half of their set by way of Erik Bodin’s pulsating drums and assistance from Fredrik Wallin on drum machine. Little Dragon created a conducive environment for dancing and the quartet’s fantastic live skills distinguished their set.

Out of all the acts on Saturday, Future Islands was the most “hardcore.” The synth-pop band played with and were inspired by fellow Baltimoreans Double Dagger, a now-defunct trio who played blood-spurting noise punk; and Islands frontman Samuel Herring’s harsh guttural outbursts are always apart of live shows. When Herring wasn’t emitting death metal bellows, during the group’s set at the Gotham Tent, he sung with a rich, adrenalized baritone, throwing in outlandish can-can kicks and full-fledged gyrations emphasizing his crotch. The major downside of Future Islands was that almost all of the songs during their set sounded (140 bpm and in B flat major). Herring was a dazzling centerpiece, but diversity wasn’t a tenet of the band.

Next, it was over to Bjork, who was back at the GovBallNYC stage. A surprising lineup addition, she was Gov Ball’s marquee avant-gardist. Fittingly, her stage set-up was the most unorthodox of the day, featuring a multi-piece string section, a laptop player, and an electronic drums player. Nature and technology seemed to be Bjork’s overarching focus.

Dressed in all white, the string section symbolized acoustic grace; the two other players, dressed in all black, symbolizing their grim, technologically rendered instrumentations. Time lapses of insects and natural occurrences backdropped the set, along with her music videos (with which Bjork and the entire ensemble synched to beautifully).

Because the festival’s front-of-house mixers had been jacking up the bass the whole the day, the passion and grandeur of the strings were muffled—except on tracks like “Stonemilker,” as violins solely caressed Bjork’s vocals for the first few minutes. Since Bjork is such a venerable artist, her set needed the utmost attention and production assistance. Unfortunately, Gov Ball failed that test, wounding her essence; just two of her songs fit well within the bassy mix: “Mutual Core” and “Army Of Me.”

In the age of bedroom artists and Soundcloud, producers like Flume have achieved massive success without the need for or validation from big sales. Flume’s popularity was clear during his performance at the Big Apple Stage; the long-stretching crowd comprised of mainly teens and 20-somethings said everything. Flume’s one of the more experimental big-name producers of recent years, frequently employing synth oddities and reverberated sections, and he’s one of the most respected young producers, too. When I made it over to his set following Bjork, he was in the middle of his classic banger “Holdin On.” A few minutes after the track had ended, I’d swerved my way deep into the crowd on right-hand side of the stage. Songs like “Juicy Insane” and his remix of Lorde’s “Tennis Courts” were incredible, even in the midst of all the sweaty, frolicking teens I was stacked up against.

During Deadmau5 and Flume, a bunch of adolescents, and festivalgoers just out of adolescence, were consuming incredible amounts of weed and beer. Being a teen myself, it was still mind-boggling. Although their extreme substance use was unhealthy, it’s indicative of their perspective on Governors Ball: an annual outlet for freedom and living in the moment. Many of the attendees were youngins coming from the suburbs around the tri-state area. The level of elation at the festival determined how much of a grand live event it’d be for them.

Governors Ball was the hot topic of discussion for thousands of kids at school today, but its impact will outlive the rest of everyone’s high school careers. It’s a place where young people can see their favorite music; the festival is gonna last for a long time. Getting that mass youthful devotion has kept it going.

As for me, I enjoyed the experience and I’d definitely go to Governors Ball again. I just wished more kids my age had stayed to ingest the rapture of Bjork. 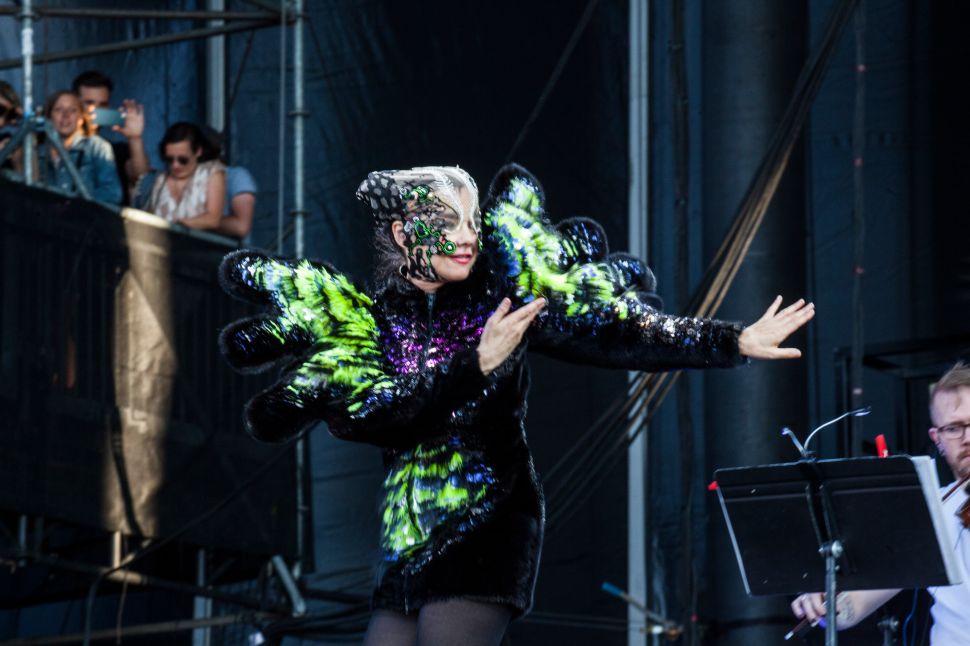