This season, Bryan Fuller has been taking his time in revealing who survived that bloodbath of a dinner party that closed out the end of season two. Waiting until episode two to reveal how Will Graham pulled through the murderous fiasco was deliciously sadistic. The same could be said for the tease that Abigail survived Hannibal’s culinary massacre, only to see that she lived solely inside Will’s aggressively vivid imagination. It’s not like Abigail hasn’t staked out some prime real estate in Will’s mind back when he was locked up in the Baltimore State Hospital for the Criminally insane and regularly daydreamed of her wading out into the stream with him while he fished. However, imagining a living person you assume to be dead carries more hope and optimism than carrying on with the specter of someone you watched get violently diced right before your eyes. It’s with a sad and crushing finality that Abigail’s neck wound opened and bled all over the church before she vanished into the ether, leaving Will alone to sink further into Hannibal’s influence.

It takes until episode three to learn that Jack Crawford survived the season two finale, despite being stabbed in the neck. Granted, Jack surviving getting a blade buried into his throat seems about as likely Abigail living through having her neck sliced open. However, we’re not even a quarter of the way through the season and we’ve already enduring a substantial bit of heartache, so we take our silver linings where we can get them. It should be noted that Jack’s neck is obscured by the dark shadows of the cathedral in Palermo and the collar of black overcoat, so we do get a peek on the scar on Jack’s neck, which echos the “smile” emblazoned across Will Graham’s belly.

While it would appear that Bedelia is correct about Hannibal using Dimmond’s bloody corpse Valentine as a sort of batsignal to Will, Jack, and presumably Alana, Jack makes it clear that he showed up in Italy to find Will. Instead, he’s greet by Will’s Italian doppelganger Chief Inspector Rinaldo Pazzi, who suggests that he and Jack reclaim their tarnished reputations and nab Il Mostro when he inevitably returns to Florence. Jack balks at the offer.

Sadly, Jack isn’t even close to meeting up with Will since he is off in Lithuania, breaking into the vast, palatial, but criminally neglected Lecter family estate. When he gets there, Will is greeted by Chiyo, a young Japanese woman who appears to be serving as sort of a groundskeeper and a jailer for the feral old man who murdered Hannibal’s sister, Mischa. Like, Bedelia, Chiyo seems to be another woman in Hannibal’s orbit who operates somewhere between accomplice and captive, participant and observer. Her history with Hannibal is hinted at via the care she puts into killing, cooking, and eating the pheasant, a scene bookended by Hannibal lopping a hand off an arm with a meat cleaver in preparation of an ill-fated meal.  Over cups of tea, Will rightly calls out the fact that the death of Hannibal’s beloved sisters doesn’t explain why he’s a homicidal cannibal.

“It doesn’t quantify what he does,” Will says, speaking on the audience’s behalf.

That being said, Will’s intimate friendship with a psychopath doesn’t quantify the fact that he frees the feral man from his cage in order to see if Chiyo will murder him. After killing him after an intense struggle, she rightly draws the parallel that Hannibal was often driven by the same kind of morbid curiosity. On the other hand, now that her prisoner is dead, she’s now liberated to go track down Hannibal with Will. But first, Will needs to leave a calling card for Hannibal, consisting of turning the corpse of Mischa’s murderer into a glistening, dangling angel, suspended from a ceiling and covered with snails similar to the ones that feasted on Dr. Abel Gideon’s limbs from the flashback dinner in the first episode. During the season premiere, Fuller tweeted that the snails would be a repeating motif throughout the season and the ancestral Lecter estate was crawling with them. Although Chiyo seems to think Hannibal will never return to the estate, Will’s visceral love letter to the man who tried to gut him seems to suggest otherwise.

As for Hannibal, he and Bedelia talk about the nature of his and Will’s twisted relationship, conflating the feelings of betrayal Hannibal feels from Will to that of falling in love. Jesus, why don’t these two get a room already??? Well, a room that isn’t one of both of their memory palaces where the two can finally consummate their batshit union while  in an actual corporeal form.

Bedelia rightly points out that Hannibal is getting sloppy and impulsive and that his capture is a forgone conclusion. She also notes that she has a plan to extricate herself from his inevitable downfall, which is intriguing as hell given that every other attempt to walk out of this kind of soft captivity was derailed due to her own hesitation. For someone who seems to have her exit strategy all worked out, she still looks nervous as hell eating oysters at dinner while Hannibal serves of rack of human arm to the haughty professor from the first episode. As usual Hannibal looks styling as hell in his striped dinner jacket and bowtie ensemble while he mixes the cocktail served to the passengers on the Titanic right before it sank and impulsively sinks an ice pick into his skull.

In one of the more revealing character moments, Hannibal casually reclines and picks at his food while Bedelia remove the ice pick and releases the professor from the makeshift lobotomy that both blinded him and left him an altered state of awareness. In her attempt to ease the man’s suffering, Hannibal points out that she technically killed him by removing the pick. I mean, if you’re a stickler for technicalities, sure. Anyway, by removing the pick, Bedelia has taken a long stride away from “observer,” placing her firmly in “participant” category.

Amid all the bloodshed and the fact that now two people connected to the museum that employs Hannibal are dead, the couple has found the time to have a few heart to hearts comparing Hannibal’s feelings towards his dead sister with his feelings towards Will. Surprise, surprise, a complete psychopath is totally uncomfortable with being made to feel empathy, guilt or love by another person! I know, right?

In a moment somewhat adjacent to romance, Hannibal shampoos Bedelia’s hair before she reaches the conclusion on how he dealt with the sadness, grief and guilt surrounding his sister.

“How did she taste?” Bedelia asked before being swallowed up by the bathwater.

While sitting at his harpsichord, Hannibal decides to resolve his complicated feelings towards Will the same way.

“I have to eat him,” Hannibal says in the same casual air you’d order a coffee or a donut. 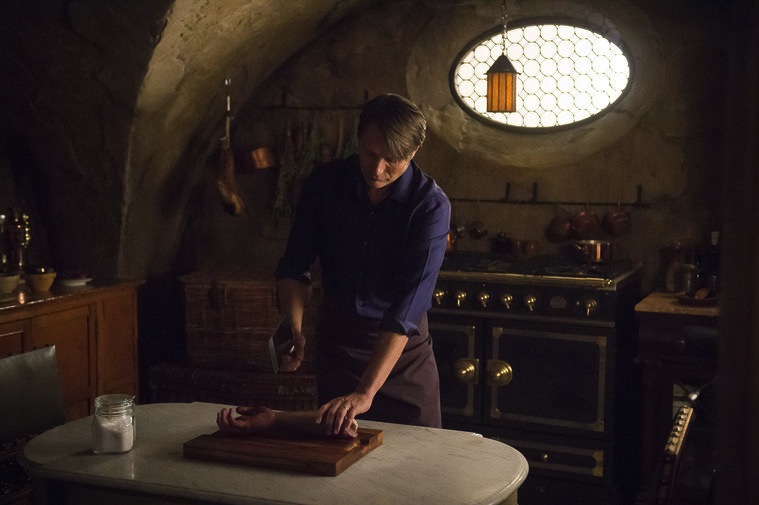