TV fans’ favorite cannibal is back. NBC’s Hannibal returns Thursday and showrunner Bryan Fuller was all too happy to talk about what’s coming up in season three of the drama.

He began with a breakdown of what viewers can expect storywise, saying, “There are two chapters in season three. There’s kind of  ‘Hannibal,’ the novel mashed up with ‘Hannibal Rising.’ Then the second chapter begins with episode eight and starts the ‘Red Dragon’ story.”

Along with the new storyline is a new approach to the method of storytelling within the series, explains Fuller. “We’re steering away from the procedural aspect which means there are challenges to keep our FBI personnel integrated into the story. What we’re doing with all of the characters is finding the personal connection for them to the story that exists outside of their occupation. As somebody who loves to write character, first and foremost, and has always resisted the crime procedural aspects of the story, it’s kind of a great relief for me to focus solely on characters.”

One of those characters is Dr. Bedelia Du Maurier, played by Gillian Anderson. “More of her is always a good thing,” says Fuller, rather gleefully. “We had so much fun working together in the first two seasons and she’s such an iconic actress and brings such a specific energy to the show that it seems like a really logical next step for the series to flush out that relationship and get more of the chemistry between Mads Mikkelsen and Gillian Anderson.”

Giving more specifics about Anderson’s role, Fuller reveals, “Bedelia and Hannibal have an intimacy that goes beyond the psychiatrist-patient relationship, yet I would say at its core Bedelia will always be Hannibal’s therapist first. I wanted to make sure that she didn’t all of a sudden become one of those women who write to serial killers in prison thinking that they can change the man and make him a better person because of their love. She is absolutely not on that course and she knows exactly who she’s dealing with.”

Many have speculated that Bedelia is a version of FBI Agent Clarice Starling, to which Fuller responds, “In the novel we see Clarice being brainwashed and partially hopefully, but she surrenders to the troll of Hannibal Lecter. For our purposes, I always wanted Bedelia to be driving her own story. So it would have been very easy for us to say Bedelia has been brainwashed and this is why she has gone off into this adventure with Hannibal Lecter but the more interesting route for me as a storyteller is for that character to have her own drive, with her own curiosities about the human condition and a lot of what she’s doing is for her own edification. That was a very important point for us to make with that storyline because I feel like we would be doing the actress and the character a disservice if we just made her a drug-induced pawn of Hannibal Lecter’s plot. So, to sum all that up, no, she’s not really a ‘version’ of Clarice at all.”

While Fuller wouldn’t give away any concrete plot points, he did point to a scene in episode seven that he’s fond of. “There are many scenes that I adore, but there’s a particularly fun dinner scene that Mason Verger is hosting that I’m excited for people to see because it’s laugh out loud funny. I’m excited for people to see that scene in particular because I think it’s one of our best dinner scenes that we’ve ever filmed.”

In addition to Du Maurier and Verger, Fuller confirms that Dr. Chilton makes a return appearance this season as well. “He has a very big role in episode four,” says Fuller. “One of the things that was interesting was when we talked [in the writers’ room] about how Chilton would be changed by all that’s happened to him. We saw him in the first season being gutted by Dr. Gideon and in the second season he was shot in the face by Mariam Lass. Clearly, we do something absolutely horrible to Dr. Chilton in every season. What happens to him in this season is probably the most horrible. So, yes, he comes back in and plays a pivotal role, and we’ll see very clearly how he managed to survive those things. We don’t just sort of magically have him show up and everything is fine, we see exactly what happened from a bullet’s point of view and how he survived.”

It’s those graphic scenes that could cause problems with the standards and practices folks, but Fuller says that it’s really not the issue it could be, given the subject matter of the series.

“NBC knows exactly what we’re trying to do, artistically and also narratively, with the franchise — that we’re exploring Hannibal the Cannibal and they let us do that. We know that we’re pushing the envelope and they know that we’re pushing the envelope and they want to facilitate us in telling as rich and complex an adult story as possible but there are parameters because we’re living in a country that has some really backward views on how we can do terrible things to the human body but we can’t do beautiful things to the human body.” Fuller gives an example of a time when the S&P department actually applauded the show’s work. “We have this kaleidoscopic lesbian love scene that is beautiful and I actually got a note that said the Standards and Practices Team all applauded this sex scene because it was so sensual and erotic, but played within the parameters of what we could broadcast.”

Discussing the creative aspect of the series, Fuller relates his how he confronts and overcomes artistic obstacles. “The writing process is always complicated on this show. It’s very hard because I feel like every time I sit down to do a pass at a script, I’m teaching myself how to understand this show. That’s a good thing in a way because it always feels fresh and challenging and utterly daunting to make significant this entity that has been thoroughly explored in the past.”

Fuller goes on to explain his overall approach to crafting the drama, revealing, ”I think the key to this show is that every scene has three major components; One is Thomas Harris, meaning that we have to honor the literature. If I’m stuck in a scene, I scour the novels for a turn of phrase or quote that we haven’t used, sort of sampling his DNA and injecting it into this scene so it feels true to his vision. Then it’s a third psychology. I do a tremendous amount of research in psychological journals to see what’s current, what people are searching for in terms of belief, perception, reality, sense of self, all of those issues.  So it’s one-third Thomas Harris, one-third contemporary psychology, and one-third of our own magic sauce for what we are exploring in this very complicated world of relationships with a serial killer.”

Urging viewers to get onboard with the series, Fuller says, “I really think season three is a brand new entry point that even if you haven’t seen Hannibal in the first two seasons, this is actually a great place to jump in and allow yourself to be swept away.”

The third season of Hannibal begins Thursday night at 10/9c on NBC. 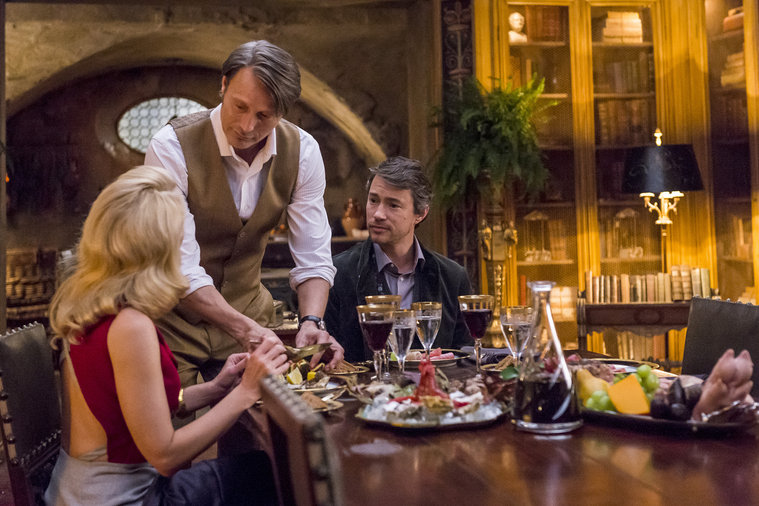