After getting acquainted with Hannibal’s new life as a Dante-scholar in Europe, it’s time to check in on Will. We return back to the dinner party from hell that ended season two.  Amid all the bloodshed, Hannibal takes issue with the fact that Will would rather see the cannibal doctor behind bars than run off and be a murderous family with the good doctor and Abigail Hobbes. As we can see, Hannibal took that slight rather personally. How personally? Well, personally enough to slash through Will’s guts and then fix it so that slicing Abigail’s throat is the last thing Will ever sees. Of course, before everything fades to black, Hannibal tells Will he forgives him for the betrayal and hopes that Will can forgive him.

Just as Bedelia succumbed to Hannibal’s influence when she submerged in the bath, so did will when he sank in the room filling with blood.

“Occasionally I drop a teacup to the floor just to see it shatter,” Hannibal remarked last season.  “I’m disappointed when it doesn’t pick itself up and come back together. Someday, perhaps.”

Will, Hannibal’s delicate teacup came back together in spectacularly telegenic fashion. He’s recovering in his hospital bed with his face unscathed and his torso bandaged in such a way to enhance his extra-cut pecs. Bryan Fuller must have had Hugh Dancy working out in the off season.

When Will eventually comes to, he’s presented with someone who is anxious to see him. That someone being Abigail, who is convinced that Hannibal used surgical precision to make sure he could cut them both without actually killing them, as if we didn’t see blood gush out of her neck with the force of a firehose.

After all this Abigail is still clinging to the idea that she, Will and Hannibal can trot off to some kind of murderous Neverland, united by their twisted devotion to this makeshift family unit. Will stands in as a tenuous voice of reason until he wake up alone, with the horns of the stag piercing through his bandages, emerging from his chest. In Red Dragon, it was mentioned that Will Graham spent some time in a mental hospital after Hannibal got too deep into his head and caused him to unraveling. I imagine we’ll see some of that unraveling this season. In the past, the imagery of the black stag was always positioned as an evil looming at a distance, whether it was on the horizon or on the other side of the room. Now it’s inside him, forcing it’s way out.

For most of the episode, Hannibal is physically in the periphery or tucked away in flashbacks or hallucinations in Will’s memory palace. He taunts Will with drawings of the clock that Hannibal used to manipulate Will when he was suffering from encephalitis in season one. Hannibal lurks in catacombs and appears in photographs and flashbacks courtesy of  Inspector Rinaldo Pazzi, Will’s Italian analogue, gifted (or cursed) with the same empathy disorder and obsession with tracking down Hannibal, or as he refers to him, the Florentine serial killer known as Il Mostro.

Despite all this, Hannibal’s presence is undeniable. I mean, the fact that the  man twisted Dimmond into a splayed human heart and left it in a cathedral as a valentine and apology to the man he gutted like a fish does kind of leave an impression. Plus, there’s the fact that when Will and Abigail are walking through the crime scene in Palermo, and discussing the nature of God, Will can’t help but conflate God with Hannibal.

Inspector Pazzi points out the fact that Dimmond’s mutilated body, or what was left of his body, was discovered shortly after Will came to town. However, instead of laying suspicion on Will, he already knows that Hannibal set up Will as his patsy because the cannibal always gets away clean. Will points out that Hannibal always eats the evidence. This is his design.

While Pazzi seems Will as a kindred spirit, Will sees Pazzi as Hannibal’s eventual dinner.

“I’m usually right about these things,” laments Will. If anyone could understand that, it should be Pazzi. However, he’s too driven by his twenty-year obsession to nail that young Lithuanian who positioned his prey into the formation of the Botticelli paintings he sketched at the Uffizi gallery to take heed of Will’s severely credible warning.

While he’s left alone to do his mental empathy acrobatics with the crime scene photos, the corpse heart unfurls and the stag’s antlers emerge with the whole grotesque display growing limbs and cornering Will. This probably wasn’t what Dimmond had in mind when he made the blackmail proposition to Hannibal that the two men untwist each other to their mutual benefit.

After Will emerges from his visions, he’s joined by Abigail. After he apologizes to Abigail for not being able to protect her, the wound in her neck reopens and what we suspected all along turns out to be true. Abigail was dead all along. We then flash back to eight  months where Abigail’s corpse is taped up, bagged and disposed of while Will is mended, stitched up and repaired in the kind of intimate detail typically reserved for one of Hannibal’s cooking scenes. The fact that Abigail was operating under The Sixth Sense rules where she was only interacting with Will should have been the giveaway.

Now that Abigail isn’t around to ground Will and force him to play the voice of reason when she romanticizes that Hannibal will care for them, Wil seems to succumb further to Hannibal’s influence. When Pazzi asks Will if he’s praying, he responds with the fact that Hannibal wouldn’t pray.

As if to further illustrate Will’s descend in the darkness, the two men are submerged in the shadows of the catacombs below the cathedral and amid the skeletons, Hannibal and his giant brass balls are still lurking around the active crime scene. Things become tense when the Italian cop and Will are shuffling around in the darkness what with a cold blooded cannibal hiding in the shadows and Will basically admitting that he doesn’t know whose side he’s on.

Just when we think we can’t become more concerned about Will, his state of mind and his allegiances, he whispers “I forgive you” just audibly enough for Hannibal to hear.

Sure, you may be the fragile, teacup that managed to put itself back together, but goddamn if you aren’t thoroughly cracked. 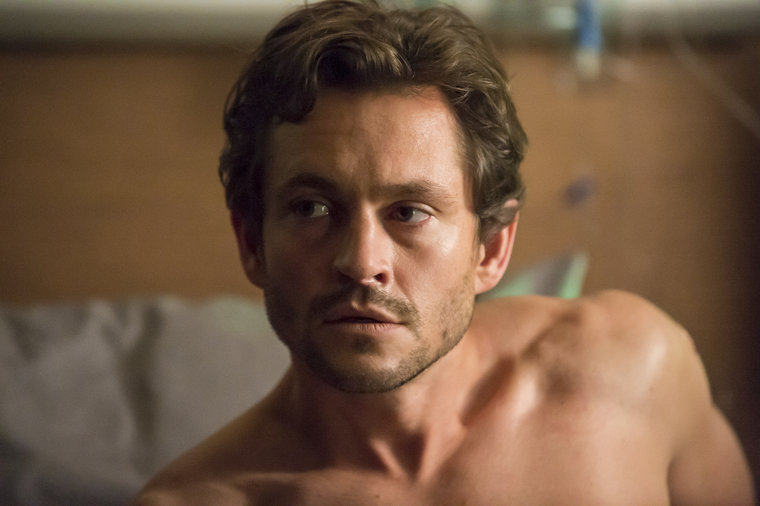