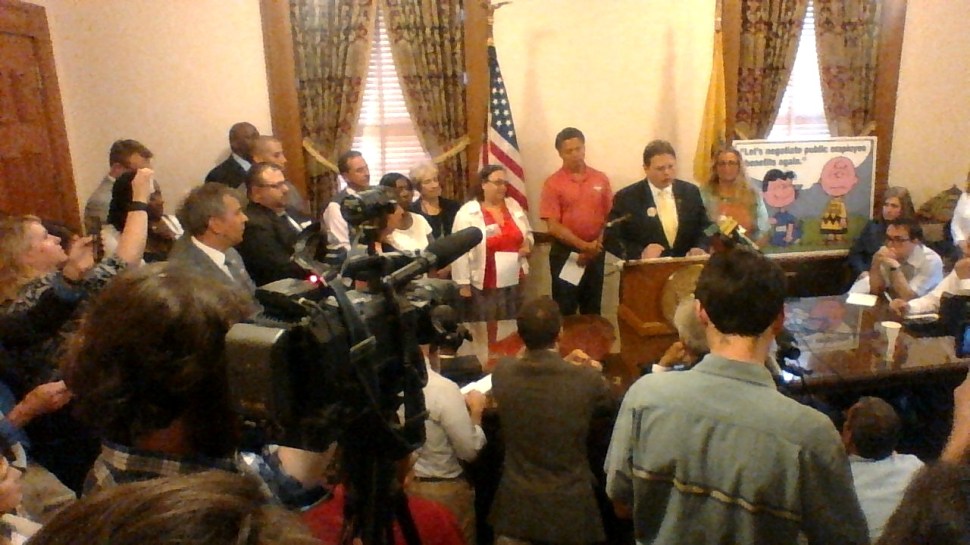 TRENTON — Surrounded by union leaders and their rank-and-file in a cramped room in the statehouse this morning, Senate President Steve Sweeney (D-3) and Assembly Speaker Vinnie Prieto (D-32) sounded one last battle cry before heading into their respective sessions to pass a proposed $35.3 spending plan that includes funding for education and a full FY2016 pension payment.

“Once again, we in the Legislature are keeping our commitment to make the required pension payment because it is the right thing to do for employees and the state,” Sweeney said. “Public workers have made their contributions every year and if the administration had lived up to its commitment, the pension system would be on the way to fiscal health and the state’s finances would be stronger. The failure to make the required payment only increases costs in the long run. Every dollar we put in now saves three dollars in costs.”

Democrats are set to put the finishing touches and approve their budget this afternoon. It’s is one of the biggest spending plans in in state history, focusing largely on funding for higher education, healthcare and social services, and a beleaguered pension and benefit system, for which it puts up a full $3.1 billion scheduled payment for FY2016.

But many of those measures are likely to meet the veto pen of Gov. Chris Christie, who with the support of Republicans in the legislature has put up a $33.8 billion budget that includes a partial $1.3 billion pension payment.

Christie’s decision to under-fund the system is one again serving as the main flash point of this year’s budget season, pitting unions and Democrats who would see the state meet its full obligation against Republicans who argue further reforms, such as those passed by both parties in 2011, are needed.

“Everyone is obeying the pension reform law – except the governor who signed it,” said New Jersey State AFL-CIO President Charles Wowkanech. “Retirees forfeited their cost-of-living increases, active employees are paying more, local governments have never skipped a payment and the Legislature has again drafted a budget that includes the entire amount of required pension funding. And now, while the governor continues to break his own pension law by skipping contractually required payments, he is calling for additional concessions from public workers.”

“This is a budget plan built around fiscal responsibility,” added Prieto. “We need to balance our budget and meet the state’s pension obligations, all while advocating for New Jersey’s working class residents. With this plan, we are cutting debt, meeting our obligations and protecting core values such as health care for women, quality education, tax relief for hard- working families, job creation and tax fairness for everyone. This is a budget for New Jersey’s hard-working middle-class families and their values.”

There are reputations at stake, particularly for Democrats like Sweeney, a prospective 2017 gubernatorial candidate who alienated much of the public labor base three years ago when he partnered with Christie in overhauling the pension system, only to see the Republican renege on his promises after.

“As anyone knows, I was part of this fight. To save this pension system,” Sweeney added. 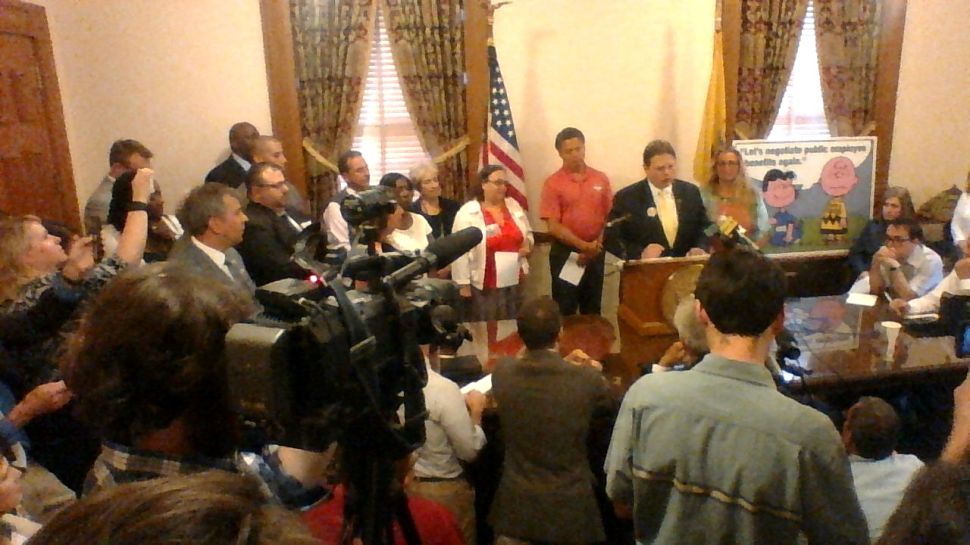