Despite all the nutjobs and silly challenges of the early episodes, Hell’s Kitchen has ended up with a pretty solid final four. Meghan has been the one to beat all season, but she’s her own worst enemy, constantly reminding herself how many challenges she’s lost in a row. T and Milly are the fighters with something to prove, and Michelle…well, she’s annoying and skated through to an unexpectedly deep run. She’s a good competitor but she young and unformed and really does kind of sound like T’s chihuahua-like impression of her.

Next week is the finale, which means a double elimination tonight, so the contestants are expecting something pretty special. They’re further intrigued when the ever-mysterious Chef Ramsay summons his charges to the meat department of a local grocery store. He gestures towards the expertly butchered cuts of animal flesh, resplendent in their fatty richness. “Today,” Ramsay says, “is Hell’s Kitchen’s first ever vegetarian challenge.” At first, that seems amazing to me. The first ever vegetarian challenge in 14 seasons? Then again, the fact that this news is breaking in front of a meat counter would suggest that Hell’s Kitchen is reluctant to even show vegetables on television.

The chefs are similarly flabbergasted that they would be asked to cook without using animal protein, and everyone freaks out like they’re being asked to make iced tea without using . Ramsay gives them all 25 bucks to shop with, which at the Beverly Hills Bristol Farms will get you one snack size bag of locally grown organic baby carrots, and the chefs get to shopping.  T goes the meat substitute route with a tofu and dumplings that Chef Ramsay declares a winner. He also deems Michelle’s dense egg dish “something a vegetarian would definitely love,” apparently speaking on behalf of all vegetarians everywhere. Meghan once again overthinks her dish to the point that not even she knows what it is, but it tastes good enough to win her the challenge. She chooses T as her activity partner, and the two of them have a grand old time parasailing while Milly and Michelle stay behind to rake leaves, scrub the carpet, and let’s say alphabetize Chef Ramsay’s extensive collection of pomades, gels and volumizers. Luckily, Milly manages to make it through the afternoon without drowning Michelle in the sous vide bath.

Ramsay warns the contestants that they’ll be competing against another team of chefs during service, but instead of trotting out some of his famous buddies or a team of Josh clones, he brings in the chefs’ family members! For a moment, I hoped that this was part of some crazy long con in which the contestants’ families secretly trained for years to become chefs so they could destroy their loved ones’ dreams in front of a live audience. But no, they’re just there so they can hang out together, and Ramsay was just lying again. The families are predictably adorable – Milly and T get to see their kids, and Michelle giggles and swoons over her boyfriend. Even Meghan-Bot can’t resist seeing her mother, and suffers a short circuit in her wiring that briefly allows her to experience human emotion.

But enough sentimentality. It’s dinner service! And with only one episode left to go, dinner service is seriously intense. Last week, each chef took a turn expediting tickets as sous chef. This time, they’ll rotate through running the pass, meaning they’ll need to personally approve every plate before it gets sent out to the diners. Ramsay takes a moment to remind the chefs of their shortcomings before jumping into service. Meanwhile, sous chef Andi covers the unattended stations, playing hilarious little pranks like plating the incorrect protein and slipping razor blades into the risotto. The contestants all handle the pass proficiently, though they almost all get fooled by Andi’s skullduggery: Milly mistakes crab for lobster and Michelle stares down a piece of broccoli before incorrectly deciding it’s cauliflower. At the pass, Meghan lets her inner Ramsay fly and Gordo eats it up, the two of them sending back plates in a harmonious duet of barks and grunts. It’s the first time Meghan’s seemed confident all season, but even she gets tripped up and sends out an incorrect piece of fish. Only T catches an error, noticing the meat in her beef Wellington is actually lamb.

With service over and the chefs’ families mysteriously vanished, it’s time to pick two contestants for the chopping block. Meghan claims she wants to compete against the best, but disappointingly picks Michelle to go against her in the finale, so I guess what she really means is, “I want to win this thing in a walk.” But in the end, it’s Michelle and awesome-to-the-end Milly who leave the kitchen. “Cook dat food!” Milly exhorts his colleagues as he hands over his jacket, and with Meghan and T going heads up in the finale, something tells me dat food is gonna get cooked. 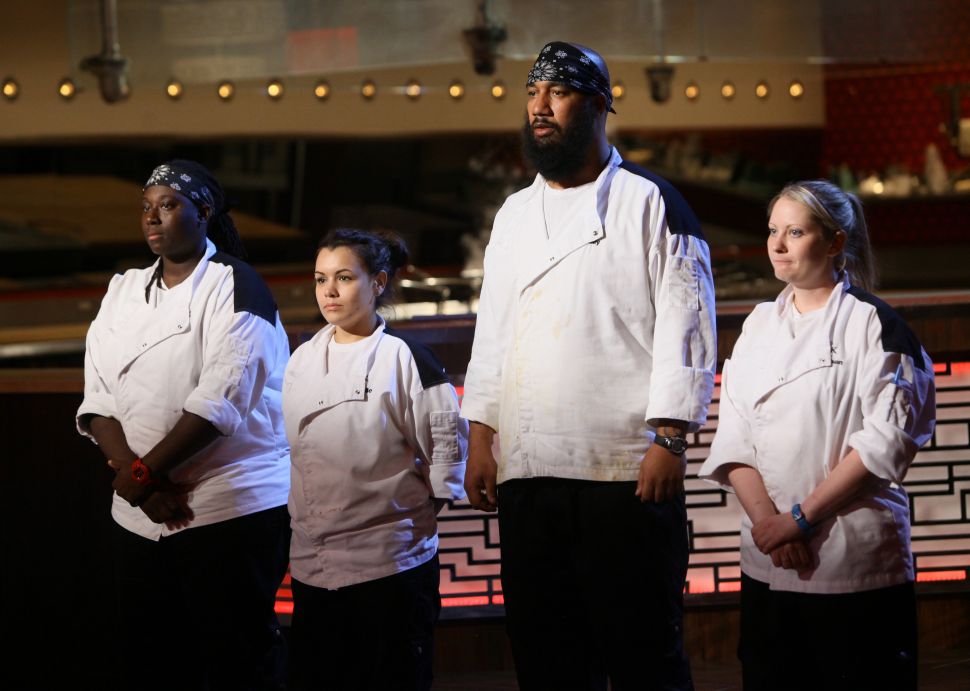