It’s been a long, risotto-soaked ride, my friends, but Hell’s Kitchen has redeemed itself in the home stretch by showcasing the two most deserving chefs in the cast. The finale pits culinary powerhouse Meghan, who managed to persevere despite an epic team challenge losing streak, against T, who looked to be an also-ran but surprised everyone with her consistency, focus and grit. Even Meghan, who hates everyone, quickly recognized T as hidden talent who could run a kitchen with the best of them. If you couldn’t tell from my 73 previous recaps of this season, I’m not that interested in ridiculous characters and personal drama when it comes to food television (though there were certainly a number of notably ridiculous characters on display). My favorite flavor of reality TV is simply watching talented people do what they love, and with the mutual respect on display, it was hard not to go into the finale rooting for both women.

But first, the silliness. Meghan and T are introduced to the winner of Hell’s Kitchen season 10, Christina Wilson, a name I’m not familiar with, but one that sends T into a tizzy as though she’s meeting the Pope. The trio is whisked off to Las Vegas for a luxurious, all-expenses paid trip that lasts all of 16 hours. Meghan and T spend their time in Sin City trapped in their hotel room concocting their menus for the final service, and then are immediately shlepped back to Los Angeles. Apparently what happens in Vegas is too boring even for this show.

In LA, Meghan and T are summoned to Gordon Ramsay’s house, where they meet his wife and daughter, whose names I didn’t catch but let’s just say it’s Pippa and Hermione. Mrs. Chef takes the competitors out back and…surprise! Turns out Ramsay’s house is a “house” in the same way Hell’s Kitchen is a “restaurant.” It’s all just a big set where the chefs will perform Ramsay’s challenge in front of a live, drunk audience. The finalists are given one hour to create five dishes that will be judged by a team of five celebrity chefs including Wolfgang Puck and Hubert Keller. Disappointingly, the actual cooking of food takes up about 20 seconds of show time. I realize there’s a lot to get to, but the challenge feels awfully rushed for a segment featuring 10 original dishes and five culinary masters. Instead of judging the dishes on a scale of one to five, the contestants are scored on a scale of one to ten. Every single dish scores either an eight or a nine from every judge (with the exception of a single seven). So if you liked this season’s earlier challenges, this one is just as arbitrary, only the numbers are twice as high!

T squeaks out a win and gets the first pick of sous chef from the eight most recently eliminated contestants. She picks Milly because that is the only correct choice. When the teams are divvied up, T also gets Adam, Nick and Christine, while Meghan winds up with Michelle, Alison, Josh and Randy. When Meghan realizes she’s going to get stuck with Randy you can practically hear her dreams shattering. Sorry, Meghan. You should’ve put well-done hamburgers and possum stew on your menu. She’s got a good attitude about it though, telling us that if her team starts slacking, “I’m going to light a fire…” — though she finishes that sentence with “under their asses,” and not, as I was hoping, with “in the pantry, killing everyone in this place.”

Service is exciting, if predictable. T and Meghan are both firing on all cylinders, and as for the teams…well, once dead weight, always dead weight. Adam puts T’s crew in the weeds early on by undercooking the ribcap. “Yeah, that just happened,” he says, using one of my least favorite phrases ever. Meanwhile, adorable Christine has the same adorable deer in the headlights look she had all season. Eventually, T forces both of them to step aside and dispatches Nick to clean up their messes, in what he refers to as “musical stations.” Nick is a champ and gets everyone back on track. On the other side of the kitchen, control freak Meghan lectures, demonstrates and corrects until Ramsay yells at her for spending too much time on the line and not enough time being the executive chef. She complies, giving Randy plenty of time to prove he doesn’t know how to cook a piece of chicken. This guy. Boy, did that backwoods homegrown country schtick wear off quick. But aside from these few missteps, service goes pretty smoothly, except we don’t get nearly enough Milly.

Hell’s Kitchen announces its winner by having each contestant stand behind a door, only one of which will open when the handle is turned. One chef steps out into glory, while the other has to stand there staring at a closed door, a fitting final insult in a season full of them. Both chefs deserve the victory and it feels like it really could go either way, but at the moment of truth…it’s Meghan who emerges triumphant! The blonde bulldog manages to pull it off, despite a full season of second-guessing and self-hating. T is gracious and grateful to the very end, telling us, “It’s not that I lost, it’s that my opportunity hasn’t come yet,” and I have no doubt she is absolutely correct. There’s champagne and hugs all around, after which Meghan heads down to the basement to collect the explosives she planted in case things didn’t go her way.

Congratulations, Meghan! Time to start your new job in Atlantic City, where dreams go to die! 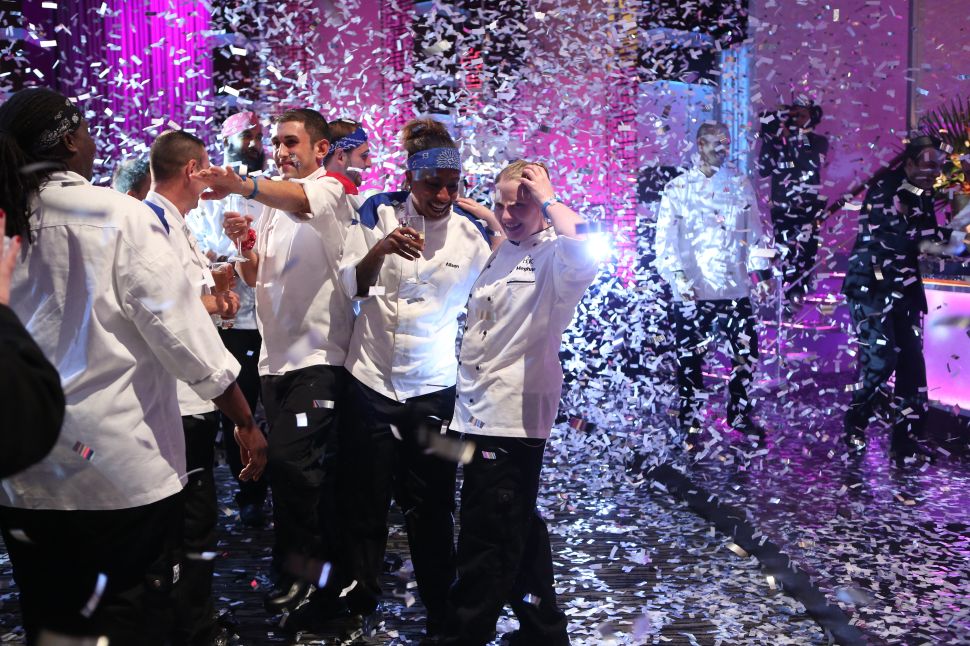