The classic watch has always been a staple, iconic for both its aesthetic and utility. With everything from Fitbit to the Apple Watch, we seem to be in a moment of tech-driven watches, and we’ve bid adieu to the timeless basics. Take for example this past week, when Tom Ford accessorized his Spring 2016 Menswear show with an Apple Watch. But here’s the twist: Mr. Ford turned the Apple gadget into a sleek version of a pocket watch. He attached the touchscreen watch face to a silver chain, as a nod to the tech world paired with a tasteful throwback.

In 1912, Jaqueline Hermès, just a child at the time, received a port-oignon–a pocket watch which was made to be secured to the wrist–as a gift from her father. At the time, this was monumental; It meant that she could tell time while riding her horse, without keeping her watch hidden in a pocket or clipped precariously to her clothing. In line with her equestrian soft spot, the watch was designed with a saddle and harness-inspired leather strap.

In 2012, over 100 years later, the age-old design reappeared in the form of the Hermès In The Pocket watch. To be worn as either a wristwatch or a pocket watch at the owner’s will, it is representative of generations of watchmaking tradition.

Now, Hermès has reappeared with a new take on the high-end classic: a limited edition remake of the In The Pocket watch, crafted in rose gold and embedded in an alligator leather band. Along with Mr. Ford’s embrace of the vintage pocket watch style, the French brand is re-vamping their own pocket watch design. Each accessory is handcrafted in Hermès’ leather making studio in Switzerland where every strap is composed of three layers of leather and polished, by hand, in bee’s wax. Tech forward or not, the pocket watch just might be the next big time-telling instrument. 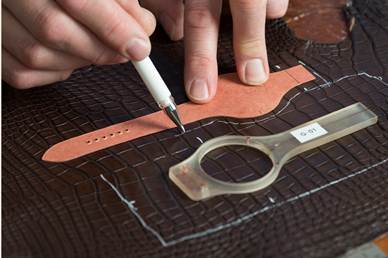