The days of rent subsidies and development incentives are over—developers, residents and new businesses are flocking to the Financial District. Everywhere, there are signs that FiDi has reinvented itself, including the new World Trade Center and its Transportation Hub, topped by Santiago Calatrava’s soaring Oculus, and the spectacular 50 West rising in its shadow.

“Fifty West changed the game,” says Luis D. Ortiz, an associate broker for Douglas Elliman and a cast member of the Bravo TV show Million Dollar Listing New York. “They spent $2 million on their sales office and raised their prices several times in less than a year. Now you can see apartments on the market there for $3,000 per square foot.”

Time Equities’ $500 million, 64-story, curved-glass residential tower is expected to top out in fall 2016. The building’s amenities include a top-floor observatory, a swimming pool, a theater with stadium seating, a demonstration kitchen with dining space, a library, and three children’s playrooms and lounges. Half of the 188 units have sold since sales launched last July.

One prominent customer is the developer himself, Francis Greenburger, CEO of Time Equities, who bought a three-bedroom apartment for himself and a two-bedroom for his four children to use when they visit. Mr. Greenburger and his wife, Isabelle Autones, plan eventually to move to 50 West from their 10,000-square-foot town house in Greenwich Village.

With fears of another Hurricane Sandy or 9/11 fading, FiDi’s draws are its many large Art Deco-style lofts fashioned from office building conversions, modern high-rises with stunning views and scenery dotted with icons such as the Statue of Liberty and the Charging Bull in front of the New York Stock Exchange. New buildings, including 50 West, have installed their mechanical systems on higher floors instead of in the basement in case of another monumental storm. The big banks that fled the area after 9/11 or went bust after the financial crash have been replaced by media companies, including Condé Nast, the Daily News and American Media.

“It’s all very beautiful down there,” Mr. Ortiz says. “It has its own energy—it moves fast. Everyone is trying to be the best version of themselves.”

The area, bordered by Chambers Street and the Brooklyn Bridge to the north, the tip of Manhattan to the south, South Street Seaport to the east and Battery Park City to the west, is now home to 62,000 people, nearly three times its residential population of 22,900 in 2000, according to the Downtown Alliance. More than $30 billion in public and private investment has poured into the area in the last decade for the reconstruction of the 16-acre World Trade Center site, the Fulton Center transportation hub, and new hotels and residential buildings across lower Manhattan.

Though there are still roughly twice as many rentals as condos in the area, the number of condos is edging up as the population grows and becomes less transient. Currently, 16 new residential buildings are planned for the area, with 2,446 units, about 760 of which are condos.

But the area’s prices are still competitive when compared to more established neighborhoods. “Buyers and renters have been drawn to FiDi seeking out greater affordability and the newness of an up-and-coming area,” says Jonathan Miller, president of Miller Samuel.

Still, some longtime residents are being priced out. After five years in a 700-square-foot Battery Park City condo, Pascal Vlaemynck, 38, a financial services project manager, plans to move with his wife and 21-month-old son to a 900-square-foot condo in Downtown Brooklyn. “We love it here,” Mr. Vlaemynck says. “If we could have afforded it, we would have loved to stay.”

“The area appeals not only to young professionals and families but

roommate situations because you can get to any part of the city and the outer boroughs from Fulton Street,” says Daniel Hedaya, president of Platinum Properties, a real estate brokerage based on Wall Street. With the PATH station and Staten Island and East River ferry terminals in FiDi, “you get accessibility to virtually every point of transportation.”

In addition, about 2 million square feet of new retail space is planned for the neighborhood. The Brookfield Place mall in Battery Park City and the World Trade Center are drawing luxury retailers and high-end food courts and markets, including Hermès, Tiffany, and Hudson Eats. At South Street Seaport, Pier 17 is undergoing a makeover as a sleek four-story retail complex, and developer Howard Hughes Corporation has proposed an adjoining 43-story residential tower.

Once considered a desert for fine dining, FiDi is becoming a magnet for celebrity restaurateurs, with a Nobu slated to open at 195 Broadway in early 2017. This winter, Keith McNally and Top Chef judge Tom Colicchio will open restaurants at The Beekman, a new hotel/condo project at 5 Beekman Street, and Danny Meyer now has three restaurants in Battery Park City.

Residents note that FiDi is within walking distance of Tribeca, Soho, the Lower East Side and Greenwich Village—but, thankfully, is less packed on weekends.

“I’ll be here for the foreseeable future,” says Adam Kramer, 37, a financial services manager who rents a one-bedroom on John Street. “I like the healthy balance between things to do and quiet. I like the fact that it’s still a bit of a secret down here.”

Among the new projects likely to change that fact is the famed Woolworth Building at 233 Broadway (see page 38) plus a number of hotel/residence hybrids seeking to capitalize on the commercial traffic spurred by the World Trade Center. Rose Associates’ landmarked, 66-story 70 Pine Street, the Art Deco former headquarters of American International Group, includes 644 rental units and a 132-suite extended-stay hotel called Q&A. It is expected to begin leasing later this fall. Among the eye-popping amenities is a four-story rooftop restaurant by Michelin star chef April Bloomfield of the Spotted Pig.

Another notable conversion is 180 Street, a 25-story former office building with eight-foot-tall windows around the entire façade. Developer Metro Loft Management is adding seven stories and a 9,000-square-foot common terrace, and expects to start leasing its 565 units in spring 2016.

Smaller high-profile projects include the Claremont Group’s 101 Wall Street, a renovation of a 24-story 1931 Art Deco office building with interiors by lauded Dutch designer Piet Boon. And then there are the big projects: developers Michael Shvo and Bizzi & Partners are building a 128-unit condo building, 125 Greenwich Street, which will become FiDi’s tallest residential tower, at 88 stories, taking over the title from 30 Park Place. Lexin Capital has proposed a 45-story tower spanning 75-83 Nassau Street with 40,000 square feet of retail space and a mix of about 200 condos and rentals.

Many of the new buildings offer large units and generous amenity packages in an effort to attract families. “Because the buildings are so amenity-rich, they’re very good solutions for families,” Mr. Hedaya said. “Kids have the ability to play in the buildings.”

Meanwhile, in addition to more food shopping options, the neighborhood has gained more public and private schools, parkland and playgrounds, including the popular Imagination Playground near South Street Seaport.

Shields Callahan, who moved to Battery Park City from Chicago two years ago, praised the selection of family-friendly restaurants, like Danny Meyer’s Shake Shack, and the plentiful outdoor play areas.

“It feels like a suburban enclave with all the green spaces,” says Ms. Callahan, 33, a medical resident and mother of a boy, 3, and girl, 1. “And the Brookfield Place food court is the answer to my prayers. It’s so convenient.” 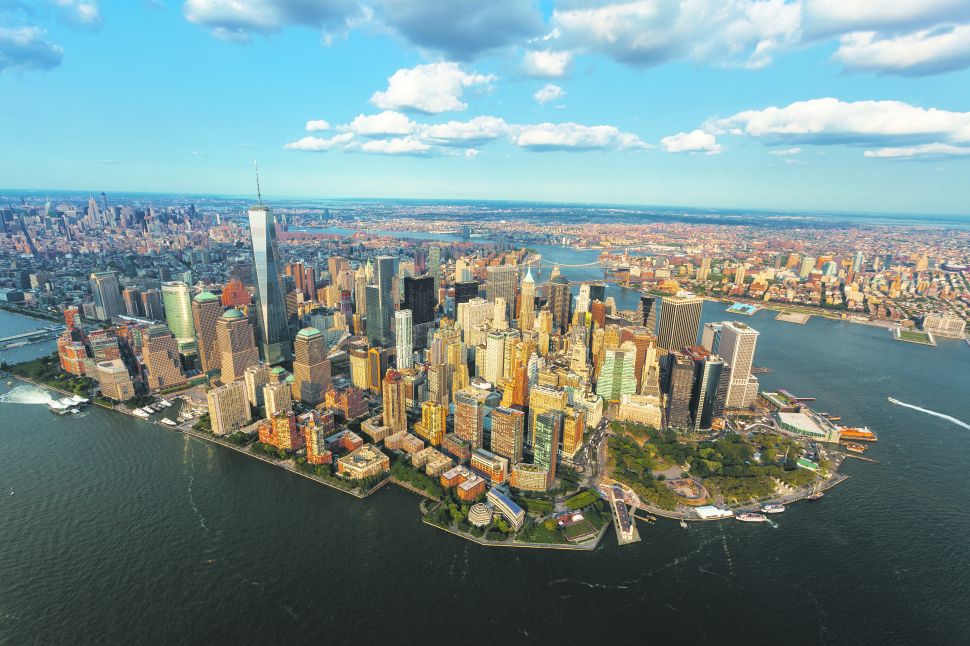