Excoriating Republicans who embrace “trickle-down economics” and hailing a handful of Democratic presidents, one her husband and another who ended her presidential dream seven years ago, Hillary Clinton delivered a campaign kickoff speech today that demonstrated she will wholeheartedly embrace, rather than avoid, President Obama’s two terms in office.

Ms. Clinton promised to rewrite the tax code for lower-income Americans, crack down on Wall Street and back an amendment to overturn the Citizens United Supreme Court decision–and embark on an era of unapologetic progressive governance in the spirit of Franklin Roosevelt.

“The Republicans twice cut taxes for the wealthiest, borrowed money from other countries to pay for two wars and family incomes dropped,” Ms. Clinton said at Four Freedoms Park on Roosevelt Island. “There may be some new voices in the presidential Republican primary. But they’re all singing the same old song.”

“A song called ‘Yesterday,'” she added, referring to the Beatles hit. “You know the one. ‘All our troubles look like they’re here to stay and we need a place to hideaway.'” (She spoke, rather than sang, the lyrics.)

Republicans have been attacking Ms. Clinton, the former secretary of state under Mr. Obama, for her close ties to an increasingly unpopular Obama administration. Today, she appeared to validate at least some conservative criticism that she would be seeking Mr. Obama’s third term–about two minutes into her speech, after noting the Roosevelt legacy “lifted up a nation,” she said Mr. Obama, along with Bill Clinton, are guided “by a fundamental belief that real and lasting prosperity must be built by all and shared by all.” (Mr. Clinton, along with their daughter Chelsea, joined her on stage after the speech was completed.)

With glittering Manhattan to her left and a resurgent Queens to her right, Ms. Clinton said she would fight for nationwide paid sick days and universal pre-K, ease college debt burdens, raise the minimum wage and reaffirmed her commitment to a path to citizenship for undocumented immigrants. She framed her campaign platform, in the spirit of Roosevelt, as “Four Fights”: building an economy for tomorrow, defending America and our core values, strengthening America’s families and revitalizing our democracy.

Despite her traditional alliance with Wall Street, forged during her husband’s more centrist White House tenure and later when she was a New York senator, she offered several stinging critiques of the financial sector, promising to clamp down on “complex trading systems” and yawning income inequality.

Ms. Clinton, standing on a stage shaped like her “H” campaign logo as supporters waved American flags, spoke at length about the struggles of her mother, Dorothy Rodham, who died several years ago at the age of 92. Rodham had a Dickensenian childhood: she was abandoned by divorced parents at the age of eight in Chicago, sent unsupervised on a cross-country train with a younger sister to live with indifferent grandparents in California and, at 14, became a $3-a-week nanny.

“My mother taught me that everybody needs a chance and a champion. She knew what it was like not to have either one,” she said.

Foreign policy was not emphasized, despite Ms. Clinton’s extensive experience in that arena. She said, to cheers, that she was in the Situation Room when Osama Bin-Laden was killed. Alluding to her much-maligned vote for the Iraq War, she conceded that she had made mistakes.

Speaking of her own experience helping farmworkers as a young girl and, later on, low-income children when she graduated law school, she appeared to be using her backstory as a way to position herself as the candidate who can relate most to everyday Americans. Even with the backdrop of her mother’s struggles, this will be far from easy.

Ms. Clinton has been a celebrity for more than two decades, a first lady to Bill Clinton and later a U.S. senator and secretary of state. She and her husband are multimillionaires, thanks primarily to commanding astronomical six figure fees for speaking engagements. Like few political figures, Ms. Clinton is universally known, a feature of the American landscape since her husband was a baby-faced governor of Arkansas in the 1970s.

Thanks to her name recognition, vaunted resume and ability to raise cash, she is the unquestioned front-runner for the Democratic nomination for president. Her three rivals, all running as liberal alternatives, are given little chance of defeating her. Rather, Clinton aides are already looking to the general election, where potentially younger and more charismatic Republicans like Florida Sen. Marco Rubio and Wisconsin Gov. Scott Walker threaten to surge by the 67-year-old.

But she batted away questions about her age, underscoring instead the history-making nature of her candidacy. Though she has not always emphasized her gender, she made it very clear to cheering supporters she was excited about the possibility of being the first female president.

“Well, I may not be the youngest candidate in this race. But I will be the youngest woman president in the history of the United States,” she said. “And the first grandmother as well.”

Ms. Clinton, who actually launched her campaign in April with a video, has tacked notably to the left. She reportedly consulted with policy experts close to Massachusetts Sen. Elizabeth Warren, a hero to progressives, and spoke forcefully about the need to reform the criminal justice system and immigration. Her rhetoric, with phrases like the “deck being stacked” against ordinary Americans, is Warrenesque–Clinton backers hope these policy positions will stave off any threats from the left, including Vermont Sen. Bernie Sanders, a popular independent and self-identified socialist.

Ms. Warren has yet to endorse Ms. Clinton. And she has not won over Mayor Bill de Blasio, a liberal Democrat who aspires to be a leader of progressives nationwide. (Mr. de Blasio, despite being a former Clinton campaign manager, skipped the Roosevelt Island kickoff.)

Buffeted by a scandal revolving around her use of email while she was secretary of state, Ms. Clinton will also need fire up voters who turned out for Mr. Obama and may be skeptical of the more centrist Clinton legacy. She is hoping to recreate Mr. Obama’s winning coalitions of young, minority voters in 2008 and 2012, no easy task for a much older white candidate in a country where Mr. Obama is polarizing. A recent poll showed that only 41 percent of Americans think she is honest and trustworthy, while 52 percent do not.

Ms. Clinton said she was asked many times how she could go work for Mr. Obama after he dealt her such a stinging defeat in the Democratic primary.

“How could you and President Obama work together after you fought so hard against each other in that long campaign?” Ms. Clinton said, repeating the question. “President Obama asked me to serve and I accepted because we both love our country. That’s how we do it in America.” 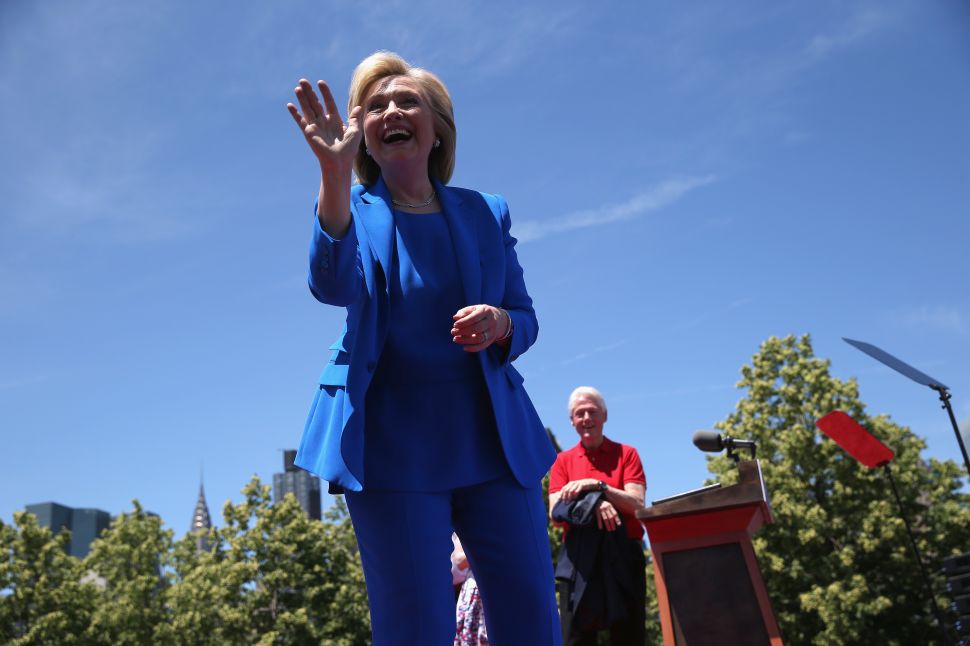