“There was a lot of laughter, some swooning and we got to work with a ‘National Treasure,’ every day. You just can’t ask for anymore than that really. The fact that we got to do all of that for six years is pretty mind-blowing.”

This is how Suzanne Martin, the creator, executive producer and showrunner of Hot in Cleveland describes her experience during the series run.

On Wednesday night, that dream job comes to an end for Martin, the show’s crew and its stars, which include Valerie Bertinelli, Jane Leeves, Wendie Malick and that aforementioned ‘National Treasure,’ 93-year-old Betty White.

The series began with Los Angeles residents Joy (Leeves), Melanie (Bertinelli) and Victoria (Malick) on their way to Paris when their flight is unexpectedly diverted to Cleveland. Surprised by the fact that they’re considered extremely attractive, ’real’ women in Cleveland, they realize that they’ve grown weary of living in high-glam, youth-obsessed L.A and decide to take up residence in the Midwestern town. When they move into a house together, the property’s caretaker, Elka (White), becomes part of their inner circle.

Martin recently revealed just how she came up with the idea for the series, saying,“I was going to a meeting to pitch a new show and it was the day that (actress) Estelle Getty died. She was so terrific as Sophia on The Golden Girls and there were so many people that loved that show, so I started to think about what the Golden Girls would look like if you did that show today. That age group looks a lot different.”

She goes on to offer her philosophy about ‘beautiful people’ and how that philosophy shaped her idea for the show. “I have this theory that people all over the country tell anyone they meet that’s beautiful, ‘you should go to Hollywood,’ so all these very attractive people come to Los Angeles and then there are these ‘beauty voids’ around the country. So, I think there are places in the country where you can go and up your status a little bit. I thought that it would be really funny to take these L.A. women who felt invisible in L.A., partly because of their age, to a place where they feel visible again. I thought that might resonate with a lot of people.”

Martin admits that even before the show hit the airwaves those working on it felt they had something special on their hands. “The week we were the filming the pilot, everyone was saying the same thing – ‘this feels like a show that will be on for years.’ I’m so glad we were right!” Martin said with a laugh.

The series was TV Land’s first foray into original scripted fare. Before the premiere of Hot in Cleveland, the network was primarily known for airing reruns of shows from decades past. When the ratings from the pilot were revealed, the success of the show was not only confirmed, it hastened the development of other material at the network.

Now, TV Land has a slate of original series, including Soul Man and Younger and the net will soon launch The Jim Gaffigan Show and Impastor. Helping to move the cable channel into the scripted world is something that Martin takes pride in. “It absolutely thrills me when people say, ‘your show put a network on the map.’ That’s not something you ever plan to do, so when it happens that your show hits and paves the way for other shows, well, that’s just is like icing on the cake.”

Hot in Cleveland was also known for its shrewd use of guest stars. During its run, the series writers crafted clever storylines for the likes of William Shatner, Susan Lucci, Carl Reiner, Carol Burnett, and Don Rickles, among many others. (Reiner, a recurring guest star, provided one of the series best bits in which the use of the double-entendre ‘going downtown’ provided some seriously funny moments between he, White and the rest of the cast.)

Bertinelli’s One Day at a Time co-stars Bonnie Franklin and Pat Harrington Jr. showed up on the show, as did Leeves’ Frasier co-stars John Mahoney and Peri Gilpin, and Malick welcomed her Just Shoot Me! castmates David Spade and Enrico Colantoni.

“The guest cast was always just so amazing,” says Martin. “Every week these icons of television would walk through the door and everyone would just swoon.”

Martin admits that one of the reunion episodes made her really take stock of what the show meant to her. “The week we had all of the ladies form The Mary Tyler Moore show – plus in that same episode we had Jesse Tyler Ferguson from Modern Family, and the incredibly suave George Hamilton too – I had to take a step back and pause for a minute. Then I thought, ‘I did this. I created this show and now it’s become this vehicle that brought these people together.’ That was a bit much for me to take in. Never in my wildest dreams did I think I would be responsible for something like that happening. It was an unbelievable week. We all felt like we were living in this moment that will never happen again.”

While the majority of everything associated with the series went swimmingly, there was one thing that Martin revealed didn’t work. “I had written the pilot with the idea that Elka grew pot in her house. But then Betty told me that she really didn’t like doing drug jokes so we changed that. But, I want to be clear that I had no problem doing that. I mean Betty White has been in the business for over sixty years and she obviously knows things I don’t know, so I had no trouble deferring to her judgment on that one.”

Now, after 128 episodes, including two done live, Hot in Cleveland will end its run with an hour long finale entitled “Vegas Baby” and, appropriately enough, “I Hate Goodbyes.”

“We felt the time was right to bring this to a close,” says Martin. “We were so happy to get five years and then we were surprised when we were given another year. This last year has felt like a bonus to us. Even though it’s really sad for us to know that this is the end of this, we know it’s the right time to do this.”

Rather ironically, sadness is an emotion that actually helped Martin create Hot in Cleveland and continues to spur her creative process. “Well, I’m doing a pilot right now so I don’t have time to be sad about the show ending, but I’ve come to realize that I work best that way. The truth is I created Hot in Cleveland because my daughter was leaving for college and I was so terrified of having an empty nest that I needed to write a show fast and get it on the air so I could be distracted. I know I’m going to fall apart at some point when it finally sinks in that this chapter is really over, but I’m holding it together right now.”

Hot in Cleveland will live on in syndication and this pleases Martin and also gives her the opening to make a formal plea to all TV watchers. “I really just want people to find the show and check it out. I know there are people that look at the cast and say, ‘ah, it’s all about women and it’s on TV Land, how good can it be?’ To that I say, ‘just watch it.’ You’ll see how funny it is. I guarantee that you will laugh at something on the show. There are a lot of funny things that happen that are really universal. The bottom line is, if you’re looking for an entertaining show, find an episode. When the credits roll at the end, you’ll find that it was time well spent.”

Now, at actual the mention of an ending, Martin does get a little emotional. “Wow. It’s hitting me as we talk about this – that we’re actually really coming to the end. But, I just know that I really can’t be too sad because I’m just so grateful for this amazing journey. At this point, Martin takes a breath and says, “You know, you hope for so many things when you write a pilot – you hope you’ll attract a good cast, that people will be happy working together, that you’ll actually get on the air and that you’ll get good reviews. Then you hope that you’ll get an audience, and that then you’ll get to stay on the air for a long time. You hope for any one of those things to happen and you know that it’s really so rare that all of that happens that when it does, you really need to savor it. I can honestly say that we savored every moment of it and it’s a good feeling to go out knowing that.”

As for the finale, Martin would offer no hints about how the series will wrap up, but she’s well aware that satisfying fans desire for a pleasing conclusion is a difficult task. “It’s an enormous challenge to put something together that everyone will be happy with,” she admits, “but we’ve been really trying to think of this from the audience’s perspective, really trying to think about what the people that have been with us, and have come to love and root for these characters, will want to see. It’s a given that everyone wants the final episode to be really funny so that’s the main thing we wanted to accomplish. We’ve thrown in some sentimentality and some serious moments and I think the mixture of those elements will make the ending not so sad and quite enjoyable for all. Isn’t that just what you want with every ending – a little bit of emotion and a lot of laughter?”

The Hot in Cleveland series finale airs Wednesday on TV Land at 10/9c.


Episodes also air in syndication and can be found on the TV Land website as well. 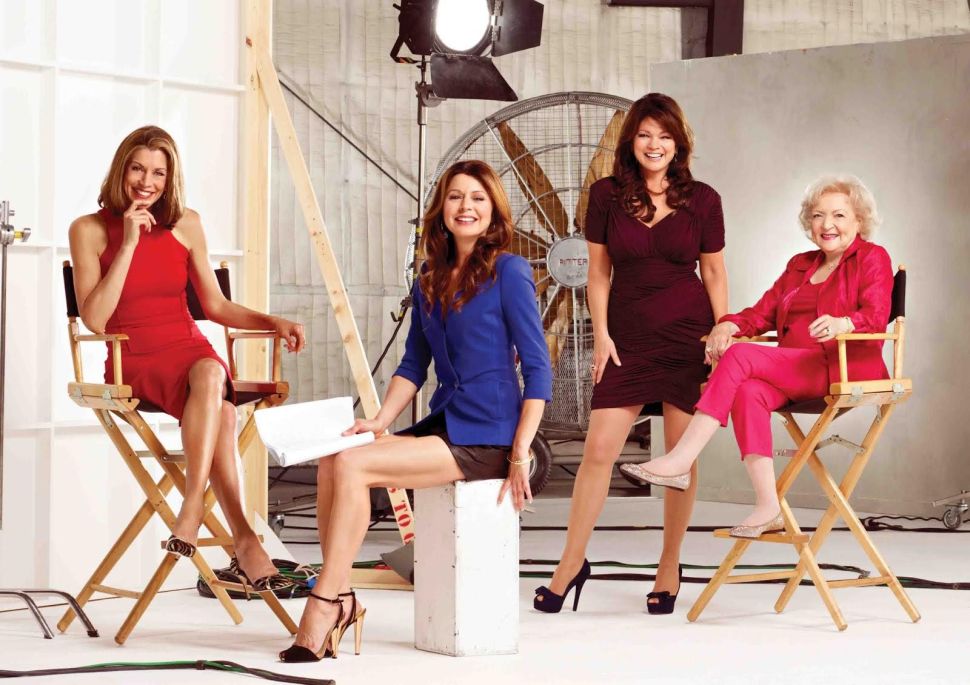