About 40 people—including two borough presidents—slept outside of Gov. Andrew Cuomo’s Manhattan office on Wednesday night, in protest of the State Legislature’s stalled action on the city’s rent regulations.

Brooklyn Borough President Eric Adams, Manhattan Borough President Gale Brewer, and council members were among the housing advocates, families, and New York City tenants who planned to sleep outside of the Murray Hill office building in hopes of spurring action from the State Senate, Mr. Cuomo and the Assembly.

Mr. Adams, who brought a lawn chair and sleeping bag for the night, said the demonstration was similar to the protests for equal protection under the law during the modern civil rights movement.

“This feeling of discomfort is really a feeling of empowerment,” he said. Mr. Adams said that while the issue is important to his constituents, it’s also personally important. “I have three tenants. I made a promise to them: As long as they live with me, I will never raise their rent.”

The rent laws, which expired on June 15, could cause trouble for nearly two million New Yorkers whose rent-regulated properties could become market-rate as a result of the stalemate. Mr. Cuomo has kept lawmakers in Albany in hopes of reaching a deal on rent regulations and other matters, including expiring laws governing mayoral control of city schools and the 421a real estate tax credit, but so far there has been no movement on those issues. Mayor Bill de Blasio and other public officials have warned landlords not to take advantage of the expiring laws by trying to harass or evict people, saying most tenants will be protected—for now—by their existing leases.

“We make New York City. We want to make sure we can afford to stay in New York City,” said Denise Adams, who has worked with New York Communities for Change (NYCC) for five years. She said the governor’s responsibility is to be loyal to his voters, not special interests.

As event organizers passed out cardboard boxes and bottles of , protesters described their preparation for a night on the street. Esteban Giron, a Crown Heights resident, said the city’s rent laws helped him win a lawsuit against his landlord last year. Mr. Giron said he was also among the 55 protesters arrested in Albany earlier this month, and continues to participate on behalf of his neighbors that don’t have the luxury of missing work or school to protest.

Mr. Adams said that after the team regroups this morning, they will look to begin similar “sleep-ins” in different neighborhoods of the city.

“We’re not asking to keep our mansions,” said Jeff Gold, a healthcare advocate working in architecture who warned that the city depended on the communities whose futures are held in the balance of these negotiations. “We’re just trying to keep our perch to stay in New York.”

“It’s pretty sad that I’m 59 and I have to sleep outside,” Mr. Gold said, checking his watch as midnight approached. “I mean, where am I going to pee?” 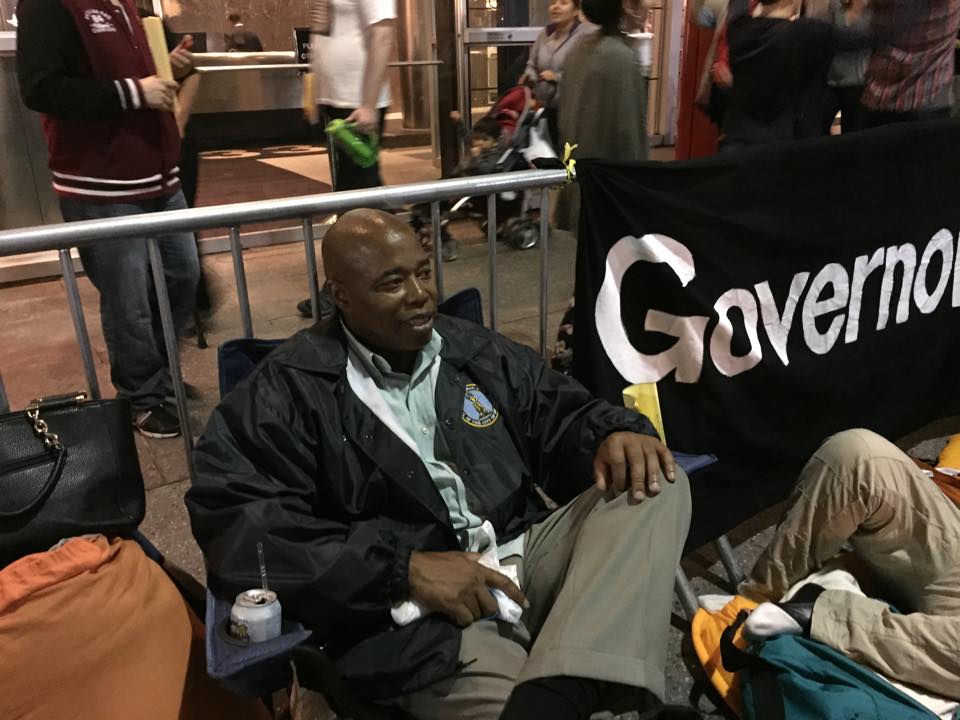