It’s been an unhappy week in conservative America. I won’t lie. Last week’s three big SCOTUS rulings on Obamacare, gay marriage and housing, and the race to destroy Confederate statuary—because bringing down the flag over the South Carolina statehouse isn’t enough—have been dispiriting. The dawning awareness that we no longer live in a Constitutional Republic, and that we cannot count on the rule of law or the plain meaning of words in legislation, is dive-under-the-covers depressing. If you believe, as I do, that liberalism unleashed has a lot in common with fascism, some dread accompanies evidence that constitutional restraints have been cut. The temptation to hide was strong.

By a few minutes after 10 a.m. on Friday solid citizens were making plans to drown their sorrows. A usually cheerful, responsible citizen noted that you can’t be drunk all day if you don’t start in the morning. Social media was rife with outrage—at least among my crowd—and a collective throwing up of hands in disgust. Thousands of Facebook users defriended people with whom they usually have moderately antagonistic disagreements. The uselessness of the GOP as an ally in fighting the culture wars was widely discussed.

Listening to WNYC’s Brian Lehrer announce that he had shivers at the ruling in favor of gay marriage made me turn off the car radio. Better to read the news without commentary. There was small but real consolation in Justice Scalia’s bitterly amusing tirade(s). The threats to religious freedom outlined by his fellow dissenters were not amusing in the least.

And yet, at a social gathering Friday evening entirely populated by people with views to the right of Attila… conversation was cheerful and focused on the future. Decline doesn’t happen all at once. Carpe diem and all that.

The announcement that the Supreme Court was willing to let points of Obamacare legislation mean the opposite of what it said in King v. Burwell was shocking. The prospect of the hard socialism of “single payer” is around the corner, and the welfare state continues to metastasize.

But the opposite ruling would not have been a final death knell for the bloated, unsustainable policy. Justice Roberts, whatever the shortcomings in his stated logic, has made it clear that the Affordable Care Act will be repealed by Congress or not at all. That is entirely possible, if conservatives can elect new members who are committed to repeal and replace. Presidential candidates should be judged by how serious their plans are. A 100 million Americans are now paying more money that they can ill afford for less coverage. If they can’t be persuaded to vote for radical change, the GOP deserves oblivion.

Friday’s ruling on gay marriage in Obergefell v. Hodges, expected though it was, spelled the end of a very long, hard fought public relations war by the gay establishment to change the definition of the institution that has been the pillar of Western Civilization as we know it. That 20-year psyops campaign, which enlisted TV, Hollywood, all media and the education establishment, was met by the relatively feeble efforts of various Christians and other conservatives, intermittently, to fire back, in the sure knowledge that ridicule or impoverishment awaited. The Culture Wars have been an unfair fight. The aggressors were hailed as victims, in favor of “love,” while those who sought to defend traditional morality and families are now “haters.” Demoralizing, literally and emotionally.

Despite a majority of votes against ratifying gay marriage in most states—or, more likely, because of that majority against—the Supremes pulled a previously unheard of “right” to gay marriage out of … the Constitution. Rule of Law? Whatever. If one had confidence that, having won marriage, the gay community would retire to newly wedded bliss, we might get over it. But persecution of those who do not believe that five Justices can confer sameness on a departure from natural marriage is on its way. Churches, Synagogues and other institutions that retain their bedrock religious law will not be spared. Removing the tax-exempt status of churches, which will destroy them, is on the table. Polygamists are waiting their turn in court. I believe that most gay individuals honestly just want to participate in traditional family arrangements. Sadly, the gay establishment, an arm of the leftmost wing of the Democratic Party, has shown vindictiveness and a desire to obliterate that very family structure.

We can only hope that gay marriage ends with gay marriage, and that the stated desire of our gay fellow citizens to marry “normally” is just that.

Make no mistake: this ruling will not be reversed in our lifetimes. It is fine for GOP presidential candidates to protest loudly. It is better that they tell us how they will shore up genuine religious liberty, and keep the liberal sexual agenda out of public education. Maybe we need activist justices of our own. Certainly we need moviemakers, novelists, news vehicles and TV outlets.

Not enough attention has been devoted to the Court’s ruling that “disparate impact,” without proof of intent, in housing patterns, is enough to set off a Fair Housing lawsuit. That will allow HUD to rejigger any neighborhoods that don’t have enough poor people of color, by building Section Eight housing next to your one acre zoned lots, and dumping welfare recipients in the town you pay through the nose to call home. That one was a shock. Literally, there goes the neighborhood. Kiss freedom of association goodbye.

The next GOP president needs to yank HUD out, root and branch. The department has long past served its purpose and only makes trouble now. Nor should he discuss this plan during the campaign. Democrats don’t blurt out their agendas. They hide them while enacting them. We must too.

In between feeling sad about our transition from Constitutional Republic to something more capricious and potentially tyrannical, we have been forced to wrestle with the evergreen idiocy of the Confederate Flag. Nine upstanding, unarmed, innocent black citizens were shot dead by a mentally ill idiot with Neo-Nazi sympathies in a Charleston church. When blaming this incident on ubiquitous white racism didn’t stick, the liberal high command decided to make it about the Confederate flag.

Watching the black community of Charleston, S.C., and Gov. Nikki Haley stave off the racial divisiveness and hateful rhetoric that might have ensued has been deeply impressive. Like most Americans I was touched and proud to see the Christian forgiveness of family members of the dead, and white solidarity with them, in deeply southern Charleston. One suspects the nation would be better off had the first black president emerged from an AME church in the South than Reverend Wright’s Marxist race seminars.

There are many Southern attributes that I admire, but the slave-holding Confederacy was defeated and the Union held together, after a bloody war costing three quarters of a million lives. The Confederate flag shouldn’t fly on state property. Naturally, that large concession, made by Gov. Haley, led to wholesale demand for the removal of any bit of statuary of anyone who fought for the Confederacy, or owned slaves. The Jefferson Memorial is on the list.

A weekend of wallowing was enough. Monday’s emails are filled with plans, strategies and tactics for fighting on. What’s the choice? But please, let’s do it with the dignity that Justice Thomas reminded us inheres in ourselves, regardless of rights and privileges government may confer.

Lisa Schiffren is native New Yorker who lives in the Bronx. She is a senior fellow at the Independent Women’s forum, and a sometime GOP speechwriter. 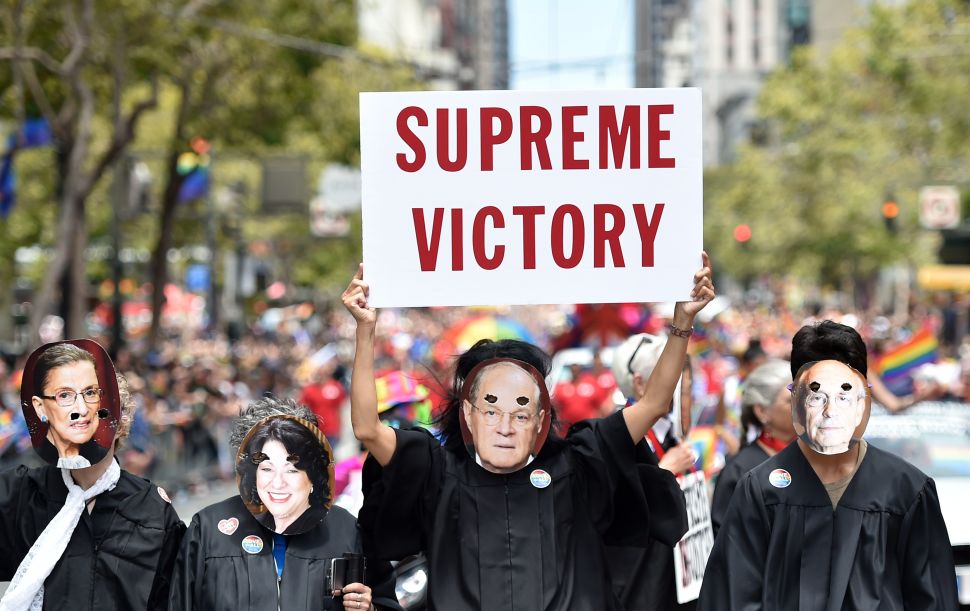