When a chef or restaurateur receives a bad review, there are a few things he can do. If he has enough restraint, he can ignore it entirely. If he doesn’t—and let’s assume that’s the case—he can read it and sit and smolder and perhaps learn (or not) from his mistakes. Or, if the mood strikes, he can curse the critic and retaliate.

Lately, chefs across the country have been making headlines for their aggressive reactions to not-so-positive coverage. Last year, the irascible chef John Tesar excommunicated Leslie Brenner, of the Dallas Morning News, after she deigned to appoint his new restaurant Knife with three stars. (Quelle horreur!) Last month, in Portland, Maine, a cadre of restaurateurs banned the critic John Golden from their establishments when he reviewed a restaurant of theirs—The Honey Paw—after they told him not to. (What nerve!)

New York has its own unique history of culinary combat. Though the scene here is a bit more mannered, chefs and critics have often sparred. The recently departed Josh Ozersky, for instance, was exiled from David Chang’s chain of Momofuku restaurants for allegedly leaking a menu before it was ready. It was a “distinction,” Mr. Ozersky wrote, “of which I am inordinately proud.”

“There’s nothing that riles other critics and bloggers more than this kind of thing,” said New York magazine’s Adam Platt, who was evicted from ZZ’s Clam Bar two years ago for, it is assumed, Mr. Platt’s not-so-savory review of Carbone, which is owned by the operators of ZZ’s. (The restaurant has never stated why.) “Getting mad at critics tends to get you publicity and maybe makes you feel good for about 10 minutes,” Mr. Platt told the Observer, “but ultimately I don’t know what it achieves.”

Mr. Platt’s intuition may be correct. PR people don’t think it’s a wise move, either. “It’s kind of one of those things that publicists giggle about—what kind of PR stunt can we pull off on this?” said Steven Hall of Hall PR, a representative of such high-end restaurants as Tavern on the Green (which was savaged in the pages of this newspaper by the pugilistic Joshua David Stein). “But I certainly don’t advise my clients to ban critics,” Mr. Hall added. “Even bad reviews have some glimmer of good in them—there’s always a line you can pull out.”

Sometimes, though, a critic’s lines can be used against him. Michael Kaminer, the food critic for the Daily News (and an Observer contributor), took down Joanne Trattoria, which is owned by Lady Gaga’s parents, in one of his first write-ups for the paper in 2012. He likened the Upper West Side establishment to “the worst thing since herpes” and felt the blowback immediately after publication. “That’s the line everybody picked up on,” Mr. Kaminer recalled. “And then they tweeted something like, ‘Everybody says Michael Kaminer has herpes.’ ” (Oof.)

The trattoria, as it happens, has a record of fighting back. Steve Cuozzo, The New York Post’s restaurant critic, said the establishment cancelled his reservation there a year after he’d slammed it in a review. Although the headline of Mr. Cuozzo’s pan was “You’ll gag on the food at Gaga’s,” he was unequivocal in his view on the matter. “Restaurant owners or chefs, like filmmakers and broadway producers who try to ban critics, are petulant babies,” he said.

In most cases, it isn’t a wise move to ban a critic because it doesn’t give the chance for a follow-up review. Perhaps Mr. Cuozzo would find that the trattoria’s food didn’t make him feel like regurgitating upon returning.

When Ryan Sutton of Eater gives a restaurant a negative review, he will wait a couple of months and then go back to see how it’s changed. He’s never been banned. “After you break up with someone,” he told the Observer, “you don’t go sit and have lunch with them and talk about it—you let things cool down.” (Plus, it seems wise to stay away from someone adept with knives and fire—as chefs are—at least for a little while.)

The restaurateur Drew Nieporent, who has dwelled on the subject quite a bit, told the Observer that retaliating against a critic is a self-defeating thing to do. “George Lang, who ran the Café des Artistes, always said, ‘You will never win a battle with a food critic,’ and he is right,” Mr. Nieporent noted. “The person who has the upper hand is the person who has the last word, and the writer always has the last word.”

Well, not always. In the 1980s, for instance, Harry Cipriani lashed out at the Times critic Bryan Miller in an ad in the paper. Mr. Miller had negatively reviewed Mr. Cipriani’s first restaurant in New York, and Cipriani referred to him as an “anatomopathologist,” whatever that is, in response. After Mr. Miller was kicked out of Bellini, a new Cipriani establishment at the time, he went in disguise and reviewed the restaurant anyway, breaching “a longstanding Times policy against reporters misrepresenting themselves,” as he recounts in an unpublished memoir he sent our way.

The whole incident is pretty famous in the food world, but Gael Greene, the legendary former food critic for New York Magazine, told the Observer she felt it “made Bryan Miller more important than he actually was.” Indeed, PR accrues to the critic as well as the restaurateur in these situations. And Ms. Greene, who has never been banned from a restaurant, wondered if she’d been doing things wrong in her time as a roving critic. “I am worried,” she admitted, “that I was not nasty enough.”

Still, Ms. Greene recalled one occasion when she gave a lukewarm review to the Four Seasons restaurant and was snubbed by Paul Kovi, the late restaurateur who revitalized the Midtown institution in the 1970s. “I walked into the room where, normally, I would be greeted by a kiss on both cheeks,” Ms. Greene said, “and I leaned in and he held my body away so that I couldn’t get close.”

Pete Wells, The New York Times restaurant critic, has felt similar shade thrown his way. “I’ve been in restaurants that I gave tough reviews to and they haven’t seemed overjoyed to see my face again,” he said. But he still thinks restaurateurs have every right to ban critics if they please, “even if it might send a message about the hospitality.”

John Mariani, the former longtime restaurant critic for Esquire (who hasn’t been banned but has been publicly lambasted), seemed to have that view in mind in a recent phone conversation.

“I guess it’s better than poisoning them,” he said. 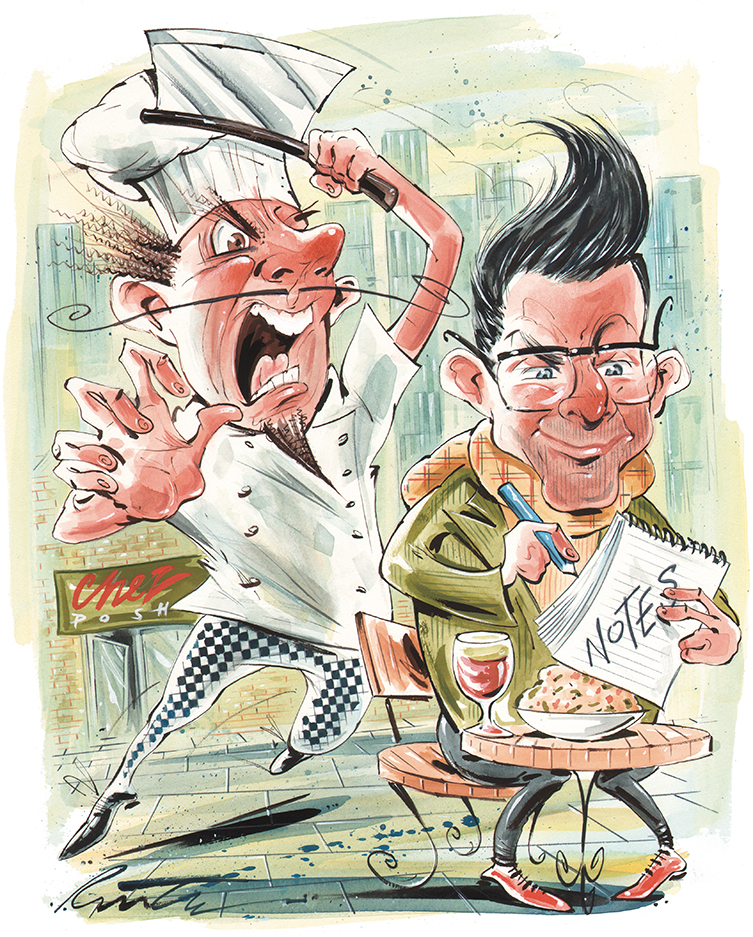