I just finished Aquarius and boy, is my willing suspension of disbelief tired! Oh god, there is just so much here to get through. Like  how creator John McNamara (who is making The Magicians for SyFy, so is A+ in my book!) has made it very clear that this show isn’t biographical. In an interview with The Hollywood Reporter, he stated, “We’re not telling the true story of Charles Manson; it’s historical fiction.” And then:

We’re not telling the true story of Charles Manson; it’s historical fiction. When Gore Vidal wrote one of my favorite novels, Burr about Aaron Burr — that’s not a biography; it’s taking this controversial figure and saying “What if?” That’s what the exercise of Aquarius is.

Right…so this is a Life of Brian thing or not? Parts of Aquarius are cribbed directly from Manson’s own lips, even if major plot points are made up out of whole cloth. Everything about Aquarius–a 13-episode “series event” that NBC aired in a two-hour-long pilot last week while simultaneously putting every episode of the season online–is nontraditional, I’ll grant it that. From the vague promotions that touted it like a mini-series but ended the show with a cliffhanger that leaves us still two years out from the Tate/LaBianca murders, to the aesthetic clash of Mad Men-meets-Hannibal (this hourlong is seriously not for the faint of heart or the squeamish, but stylistically it is to die for), to the oddball casting choice of the wry David Duchovny as a gruff, conventionally alcoholic WWII veteran cop in hippie era Los Angeles, Aquarius baffles at every turn. It wants to be everything at once: a case of the week drama that tackles (seemingly) all the racial and social issues at play in1967, but also half the time we’ll be wrenched out of that program to watch Charles Manson (an incredibly mush-mouthed Gethin Anthony, nee Renly Baratheon) as he builds his increasingly enraptured “Family” into a devoted worshipers. Central to this Family is Emma Kern (Emma Dumont), who Charlie essentially kidnaps out of a party to reignite his homosexual relationship with her father (his former lawyer) Ken Karn (Brían F. O’Byrne), a twitchy ferret of a man on the cusp of being invited into  the Nixon administration.

Oh, and we haven’t even gotten to the Black Panthers, or Hodiak’s son going AWOL in ‘Nam, returning home with what might be the future Pentagon Papers. We haven’t gotten into the unnecessary addition of Manson’s mother as a Norma Bates type who tries to get back into her son’s good graces to split an inheritance, but ends up *SPOILER ALERT* getting forcibly drugged with LSD while her son straddles her and forces the hallucinogens down her throat. After, he calls his biker friends and tells them he has “fresh meat” and unloads her to a biker gang-bang. (In reality, Manson’s mom was a distant, if supportive figure, in his life.)

The abrupt tonal shifts–from buddy cop routine to existential meditation on manhood to just the worst possible horror show you could imagine–is only part of what makes Aquarius so difficult to quantify. I walked away from the finale still scratching my head and wondering if I liked it. Or rather…if I did like it, why was I so hesitant to give it to thumbs up? Here’s what I came up with:

I do not know if Aquarius is a good show, or if I should recommend it. I’ve had a lifelong, morbid fascination with Manson as well as any other cult leader that starts out all sweet and kumbaya, only to go terribly wrong. (See also: Father Yod of the Source Family, Jim Jones, Roch Thériault, David Koresh, Bhagwan Shree Rajneesh, Children of God, Shoko Asahara and Aum Shinrikyo, Joseph Di Mambro and Luc Jouret with The Order of the Solar Temple, Heaven’s Gate, etc.,) So I might be biased: I wanted a show that focused on that darkly fascinating Manson Family, not some second-rate Bigfoot Bjornsen.

On that note, our introduction to Charlie as some sort of Evil Teen Kidnapper in the beginning of the show was a poor narrative choice. Charlie can’t start out like he’s Joe Carroll from The Following or some criminal mastermind bent on revenge: in 1967, he was still gathering up his posse and heading to Los Angeles.

A lot of people have been comparing the aesthetics of this show as “Don Draper in Los Angeles.” But while it might look like the world where Don decided to marry Megan (and the place where Megan decided to divorce Don), the nostalgic ambience of the show only takes you so far. Duchovny is trying to do a Don Draper act, but he can’t pull it off. Draper was all surface, smooth and slick and polished, while Hodiak is supposed to be more of a grizzled Raymond Chandler character institutionalized as “The Man.” Draper was able to shed his identity and create what people wanted to see; Hodiak’s, we are to believe, is just one of the hard-asses of the LAPD at the time, trying to do the right thing. Except Duchovny is not suited for self-serious roles, and there is an archness to his delivery that undercuts his supposedly stoic, war veteran persona. Duchovny cannot play the straight man to save his life; perhaps because he will forever be associated with trans FBI agent Denise Bryson from Twin Peaks in my mind.

But Duchovny’s quirk can’t be toned down, so we get these little absurdist moments where this supposedly rough-around-the-edges cop shows his ex-girlfriend ballet moves in bed, or telling a Black Panther member jovially, “I like your tiny hat!” Duchovny is just too much of weirdo himself to play someone with suspenders, a gun and a “kids these days” hardboiled persona.

And because Duchovny doesn’t read as “The Man,” it’s hard to see how his character fits organically into the Manson narrative. In another *SPOILER*, Manson spikes Hodiak’s’ drink with LSD (he does that a LOT, which makes sense as to why his followers thought putting enough of it in someone’s burger would be lethal.) It’s perhaps the best portrayal of a psychedelic experience since Fear and Loathing. Duchovny seems most comfortable in his own skin when he’s out of touch with reality, not burdened with defining it.

Further proof that Aquarius always planned to be an ongoing series, because throughout the season the Black Panthers have zero interaction with Manson. Remember, the Helter Skelter thing Manson raved about actually had little to do with personal experience: Manson worried himself sick after he thought he killed Bernard Crowe, who he believed to be a Black Panther, and feared the group would retaliate. They didn’t, not only because Crowe had no connections to the Panthers, but because he didn’t die when Charlie shot him. The whole Helter Skelter logic…I mean, the Family planned to live out the race war in a “bottomless pit” that they never found, but somehow Manson decided that the apocalypse wasn’t coming around soon enough and he’d have to start the race riots themselves? Dubious. More likely, Gary Hinman’s murder prompted the apparently pressing need to create some copycat crimes to be pinned on the Black Panthers. Yes, the rising racial tensions were reaching a boiling point in the late 60s. Do we need several episodes that focus exclusively on an organization that had no truck with Manson until after the murders? Probably not.

As for this other stuff: it’s so silly and unnecessary that I wonder if McNamara assumed he wouldn’t get Manson rights and already wrote a treatment about a composite character, a la The Velvet Goldmine. 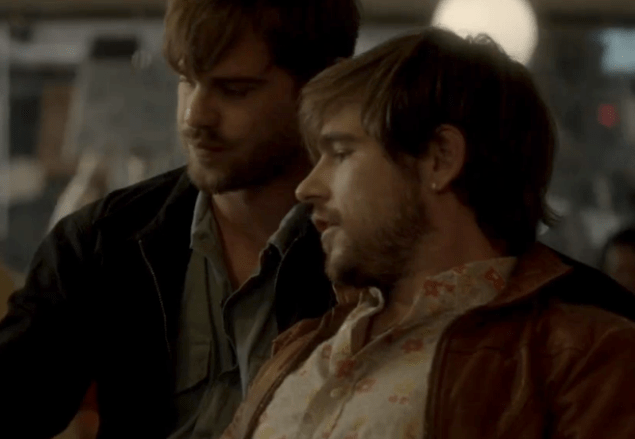 Number one complaint about the show. It was REALLY confusing at the start.

This is a man who, by the time he was 32, had spent over half his life in foster homes, juvie detention centers and actual prison. He had picked up some tricks from Scientology. He had dreams of being a music star, but his real talent was pimping. With very little backstory, Gethin Anthony is able to portray all those separate identities while pulling off a leather-fringed vest as a shirt and keeping Manson as physically small-seeming as he was. His tenderness, his desire to build a real family to replace the one he never had…all of that is played as real and genuine. It only increases the terror and helplessness felt when Anthony’s eyes go wild and he becomes a meth-mumbling monster willing to rape a man in a parking lot, or slash a cashier’s eyes out.

Next season, if there is a next season, we need something more than good-girl Emma, the family’s first Mary Magdalene, Mary Brunner, and a remarkably docile Susan “Sadie” Atkins. (Though to be fair to Ambyr Childers, she isn’t given that much to do until the end of the season, at which point she bugs out HARD.) We need Lynette Squeaky Fromme in this show, like, yesterday. Where the hell is Leslie Van Houten? Patricia Krenwinkel? Linda Kasabian? Sandra Good? Catherine Share? Barbara Hoyt? I know that we’re still a little too early in the timeline for them, but it’s so critical they get them on as quickly as possible.
Out of the context of the women who loved him, Manson was a career criminal with rock star dreams. The Manson Family wasn’t scary because of Charles Manson. The part that struck a chord in American history were the young, impressionable lost girls who performed or attended these gruesome killings with no apparent remorse. They were the ones who took Charlie’s ramblings and interpreted the directive to “do something witchy”–part of a shakedown Manson planned for Terry Melcher (who used to live at the Tate residence)– and ended up with the slaughtering of Sharon Tate and her guests. In a way, the Manson Family can almost be read as a feminist text (albeit a flawed, sad one): it’s a story about how these women, worshipping at the feet of this petty criminal, were not totally without agency; choosing to interpret his texts through the lens of their own antisocial tendencies. As Manson tells a groveling Sadie in a later episode, “I can see it in your eyes…you don’t belong to me. You belong to no one.”

Maybe that’s a good way to sum up Aquarius as a series: it belongs to no one. It’s hard to imagine the person out there who felt strongly that this show was necessary; equally hard to figure creator John McNamara for caring much about whether you “liked” his take on Manson one way or another. 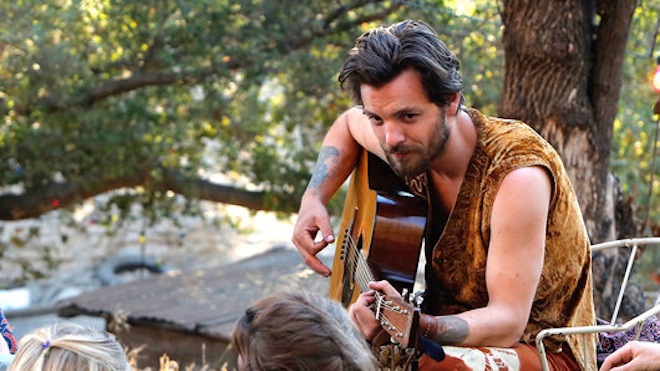