Big Game, dynamic, breathlessly exciting combination of outdoor boy’s book splendor and action-adventure big-budget movie suspense, begins onboard Air Force One, where the President of the United States (Samuel L. Jackson, of all people) is on his way to a peace conference in Helsinki. He’s down in the polls, friends and enemies alike are waiting to stab him in the back, and he needs some good publicity.

His chief security adviser and right arm, a CIA icon played by the dynamic Ray Stevenson, who once took a bullet near his heart to protect the Commander in Chief, offers him a forbidden Oreo cookie. “Mr. President, sir, one thing I have learned—life is too damn short not to have a cookie when you want one.” Then he kills everyone on board and jumps, leaving the most important leader in the world to crash into the frozen wilderness of Finland. It’s an opening scene that will leave you slack-jawed, and Big Game is off and running.

Meanwhile, on the ground, in keeping with Finnish tradition, when a boy reaches his 13th birthday, he is sent into the mountain forests for a day and a night equipped only with a bow and arrow. What he hunts and kills will prove what kind of man he is. Timid and frightened but desperate to earn his demanding dad’s respect, young Oskari (played by an inexperienced kid named Onni Tommila with a self-assured charm that grows on you) no sooner hits the snowy trail than he comes across the wreckage, rescues the president and vows to guide him to safety.

In the forest, the kid calls all the shots, asking things like “What is it like to be powerful?” and the most powerful man in the universe says, “A few hours ago I could have ordered the greatest armed force on the planet to invade any country in the world—and now I can’t even order a pizza.” Samuel L. Jackson plays him like a wimpy, bewildered parody of the president, and for a while you think Finnish writer-director Jalmari Helander might intend Big Game as a comedy. Then the intelligence officers back in the Pentagon terrorist control center, including Felicity Huffman, Jim Broadbent and vice president Victor Garber, declare Air Force One and all of its accompanying security missiles falling off the grid “the most serious terrorist act since 9/11.” It’s time for a red alert.

What nobody knows is that it’s just a wicked act of betrayal by the president’s go-to bodyguard to collect a million-dollar ransom from a Gulf oil sheikh. “I have a bullet two millimeters near my heart,” he says. “One day it will push forward and kill me, and I will have sacrificed my life to protect a man who can barely do a pushup—much less save a country.” So he goes for the cash and has no qualms about loyalty or the slaughter of children to get it. As preposterous as the situation is, the terrorist strategy is so well referenced and explained in director Mr. Helander’s script that it somehow seems plausible—or enough, at least, to keep your pulse racing for an hour and a half of summertime escapist entertainment.

The boy is hunting a deer. The terrorists are hunting the president. The president is hunting a way to survive before the first lady finds out he ate that extra Oreo. While the folks back at the Pentagon say stuff like “Where are our Navy Seals?” the audience is treated to jaw-dropping action sequences, enhanced by awesome special effects and staggering cinematography. In the end, the kid learns a lesson in heroism, the president learns a lesson in humility, and the viewer learns there’s more to summer movies than Jurassic dinosaurs, man-eating grizzly bears and Melissa McCarthy. 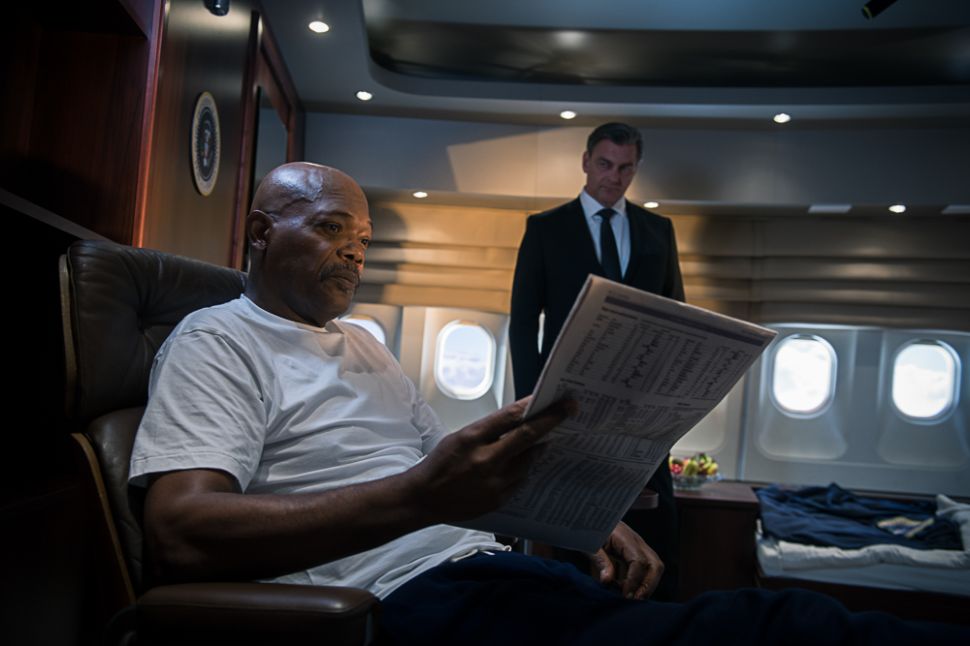