By all accounts, India’s counterterrorism raid near its border with Myanmar this past Tuesday rattled Pakistan. The raid itself was a success: New Delhi’s special forces reportedly killed several militants who had been responsible for a lethal attack on Indian servicemen early in June. But some TV stations reported that it was a cross-border raid, that the operation had taken Indian forces into Myanmar, and the Pakistanis liked that not at all. They liked it even less when India’s Minister of State for Information and Broadcasting Rajyavardhan Rathore said a day later that the raid was a message to all countries that harbor terrorists.

The question is, what will the Pakistanis do about it?

There has been a long debate in international relations about whether nuclear weapons make the world a safer place. On the one hand, it is an incontrovertible fact that since they were invented, no nuclear state has ever gone to war with another. The nuclear age has bequeathed a peace unique in the history of man and his Great Powers, and surely that is not a coincidence. Perhaps the great wars are over. No more fights of the century. No more Mayweather-Pacquiaos. Just Mayweather-journeymen, like Al-Qaeda, ISIS, or the Houthis.

On the other hand, it is also an incontrovertible fact that nuclear weapons give a very few people the ability to annihilate very many people, and we have had some very close calls. The Cuban Missile Crisis is the most famous, of course, but there were also various Berlin standoffs, the Yom Kippur War, and an occasional whiff of oblivion with Taiwan.

If ever there were going to be a nuclear war, or at least a nuclear-armed war, it would probably start in Islamabad and New Delhi, which have hated each other with a passion.

Our sample size is very small, of course: only a few countries have ever built nuclear weapons, and those have been reasonably responsible states with reasonably developed bureaucracies. As the gift spreads, and more rudimentary members of the international system go nuclear…well, who knows? There are still such things as nationalism and hatred, and they still have teeth.

If ever there were going to be a nuclear war, or at least a nuclear-armed war, it would probably start in Islamabad and New Delhi, which have hated each other with a passion. Though Pakistan and India have gone to war three times since their founding in 1947, there has been no war since each of them got their hands on the bomb. New Delhi tested nuclear weapons first in 1974 and then again in 1998. Pakistan followed suit later that year, not long before major conventional warfare broke out in Kashmir during the Kargil crisis.

In the meantime there’s been terrorism galore, of course, most of it sponsored from the Pakistani side. Terrorism has long been a tool of the weak, which is why the Serbs used it against Austria-Hungary, the Arabs against Israel, and smaller Pakistan against six-times-as-large India. Pakistan pursued a dual policy of actively encouraging Islamist groups in Kashmir and offering a sort of benign neglect to those in the lawless lands to its west, the optimistically named Federally Administered Tribal Areas (FATA). In 1994, Pakistani aid was key to the rise of the Taliban in Afghanistan, and Islamabad was later implicated in the 2008 terrorist attacks in Mumbai. Pakistan’s writ never ran very deep in the FATA, and it could claim with some justification that its military was not up to crushing the tribes and reasserting its rule.

But there’s something undeniably squirrely about a nuclear-armed government whose security services are enmeshed with radical (nihilistic?) terrorist groups, and groups not enmeshed are more or less free to run rampant. Pakistan has never been the most stable of regimes to begin with, and multiple military coups haven’t enhanced its traditions of civil governance. How far is the Pakistani government from an Islamist coup? Or at least being egged into provoking its fourth fight with the Indians?

India does have a stable democratic government, but that doesn’t mean it’s any less willing to go to the brink. Indira Gandhi was at least as strident a ruler as Yahya Khan, and today’s India is ruled by an openly sectarian Hindu government. Almost simultaneously with the Myanmar raid, Indian Prime Minister Narendra Modi fanned tension by reportedly acknowledging his country’s role in Bangladesh’s war of secession from Pakistan in 1971. The Pakistanis have long accused New Delhi of helping foment the crisis that split their country in half, and they may have a point. That argument has hung fire for forty-four years, and it’s not clear at all the antagonism has waned.

It’s easy to be sure that a nuclear fight won’t happen. But nobody doubts India has a terrorism problem, and nobody doubts Pakistan is involved. There’s the unresolved issue of Kashmir, and Pakistan’s fragile domestic stability, and a dash of old-fashioned nationalism.

If nuclear war ever does come, it probably comes in Asia, and if in Asia it probably comes in South Asia. Like Mayweather and Pacquiao, it may look unlikely to ever happen; but the delay may just be a dash of gamesmanship, mind games and drug tests, the two sides haggling over a date for the fight.

Andrew L. Peek was a strategic advisor to the top U.S. and NATO commander in Afghanistan. 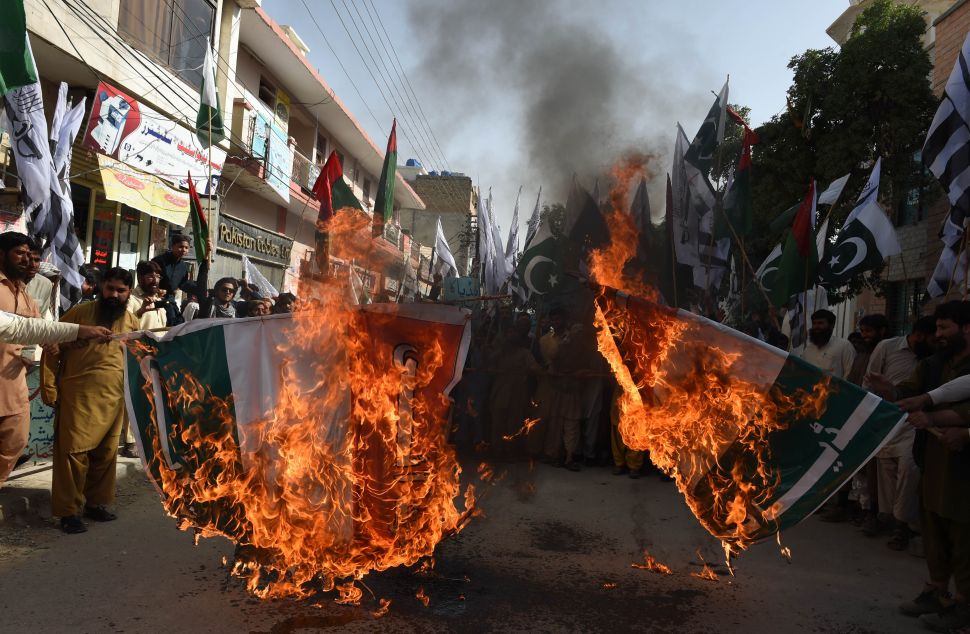