It’s a Friday evening in Union Square, and instead of flocking to the nearby bars, around 30 people are sitting silently and cross-legged on the floor of the buzzy Jivamukti Yoga studio. They—the Observer included—have come to experience Center of the Cyclone, a trendy series of pop-up meditation classes held in a range of New York hotspots.

After some easy-to-follow exercises to energize our chakras, we received an unexpected instruction: partner up with a nearby stranger and, as ethereal music played overhead, gaze into each other’s left eye for around five minutes—a long time, when you’re sitting motionless facing someone you’ve never met before. When it was done, the group sipped complimentary charcoal-infused lemonade and shared our experiences; one participant gushed about having seen his partner’s aura.

“I don’t want to wear a white robe and denounce my belongings. I just want to be a decadent, sexy New Yorker who still cares about material possessions.”

“People say [my] meditations are sexy,” said Biet Simkin, the small-but-mighty force of energy who guided the class, flowing about the room in a summery orange dress and angular bob haircut. “I made it fun—there’s not so much dogma.”

Ms. Simkin grew up practicing the art with her father, a shaman and psychotherapist who secretly studied meditation in the forests of his home country, Russia. As a teenager, she also practiced yoga and lived on ashrams.

But when that lifestyle felt too “limited,” Ms. Simkin, who’s also a musician, shaved her head and started touring around the country. She experienced “10 years of heavy drug and alcohol abuse,” she said, before finally deciding, around seven years ago, to get sober. That was Ms. Simkin started meditating again.

“I had to find a new way to get connected,” she said, “and started meditating every day.” A few years later, “it dawned on me that I needed to turn it into a business,” she said.

She held the first meditation pop-up in a friend’s loft on Bond Street—”a beautiful, decadent, million-dollar loft,” she recalled. The first class had 12 attendees. As Ms. Simkin made the pop-ups a monthly event—in places like downtown art galleries and nightclubs—that number started to grow to 25 or 30 per class. Eventually, upwards of 50 people were showing up.

“I think people were drawn to it because it was a new way of experiencing meditation,” Ms. Simkin said. “I don’t want to wear a white robe and denounce my belongings. I just want to be a decadent, sexy New Yorker who still cares about material possessions.”

She partnered with Lululemon to host another session at Lightbox, the high-tech Midtown events space. “Every single wall had a projection of nebulas and stars,” she recalled.

Other times, she’s gone into full-fledged parties and had everyone stop and meditate. Her classes can be, in her own words, like “if you took the Rolling Stones and Velvet Underground and turned it into a meditation.”

Ms. Simkin is certain—as are others—that meditation is “absolutely” the next yoga.

“It’s really an interesting thing to be on the cusp of,” she said, “to be on the mast of the boat as we arrive on the shore—it feels so brilliant to have the bird’s eye view.” 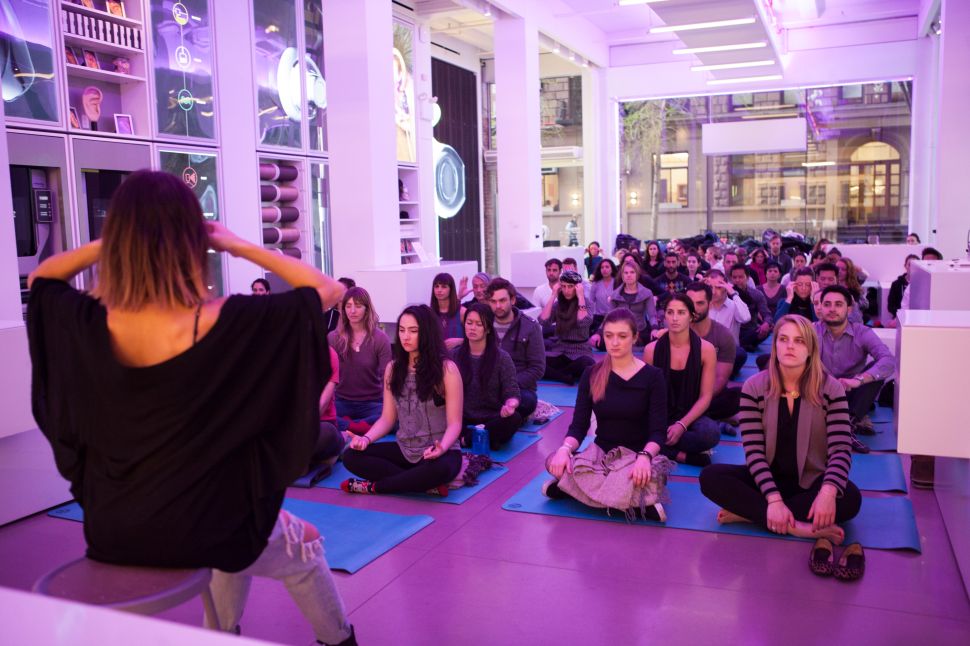