CLICK ON DIFFERENT PARTS OF THE INTERACTIVE MAP (ABOVE) TO SEE THE WAY THE PARADE HAS CHANGED. (Depending on your browser, you may need to zoom in a bit, but it works! Click different parts of the colored routes and on the pinpoint markers.)

New York’s annual Heritage of Pride Parade, scheduled for Sunday, June 28, has been a central part of New York’s cultural life for the past 45 years. The parade was launched as a 2,000-person march in 1970 to mark the anniversary of the Stonewall Riots, with chants of “Say it loud, gay is proud.” Initially, it flowed north from Christopher Street to Central Park, but has shifted routes over the decades as it grown and responded to new trends and regulations. In 1973, the parade was called a “better-organized event” in The New York Times; it proceeded from Central Park with 20,000 marchers down Seventh Avenue to Washington Square Park ending in a large rally (video).

For the next forty years, the parade has grown and shifted routes through politics and tragedy into the event it is today. Today, with the Supreme Court declaring gay marriage is a right, the one-million strong parade is a symbol of freedom, civil rights and joy for LGBT New Yorkers – and visitors from every part of the world.

The parade began as a 2000-person march in 1970 – on the one-year anniversary of the June 27th, 1969 Stonewall riots on Christopher Street – with chants of “Say it loud, gay is proud” while moving up 6th Avenue from Christopher Street to Central Park for a rally. The parade became an annual event, marching north from Christopher Street through 1972, until changing direction to move south in 1973. That year, in what was called a better-organized event in the NYT, it began in Central Park, 20,000 marchers paraded down Seventh Avenue to Washington Square Park.

In 1974, the parade was moved back to Sixth Avenue, once again traveling uptown. The 85,000 person parade was shifted to Fifth Avenue in 1978, when it ended at Central Park’s Sheep’s Meadow. By 1981, the parade was climbing up Fifth Avenue to 79th Street, and moving into the park to end on the Great Lawn.

As the AIDS crisis deepened, the more subdued parade was begun on Central Park West and Columbus Circle and wove down Fifth Avenue (passing St. Patrick’s Cathedral, to mixed reactions) to the Village for several years. It became a permanent north-to-south route. The starting point shifted over time from Columbus Circle to 52nd (and eventually to 36th Street), making for a slightly shorter route, partially because over time the City has attempted to reduce traffic impacts. The famous lavender stripe, the physical marker of the route on the asphalt, was first laid down in 1985.

In 1994, the 25th anniversary of the Stonewall Riots, the City changed the route significantly to begin at the United Nations and march up First Avenue, then west on 57th Street to Central Park. This route was put into place to help the protesters rally the UN for global rights for homosexuals. While that parade was underway, a smaller rogue event, led by “a red Mustang convertible and a 1969 blue convertible Cadillac that was used and impounded during the Stonewall clash” moved the traditional route up Fifth Avenue. The two parades met peacefully at 57th Street and 5th Avenue.

In 2010, the police decreed all parades be shortened by 25% and take no more than five hours. That year, the parade began at 36th and took a turn on 9th instead of 8th to save time and budget. The residents of 9th Street were upset by the parade’s shift onto their street, and it was returned to 8th Street the following year.

The route has remained stable since 2011, beginning on 36th Street, traveling down Fifth Avenue, crossing Christopher Street, passing The Stonewall Inn and ending in the Village. The end point shifts slightly from year-to-year – landing mostly in the Hudson River Park area and turning into a celebration on the piers.

One million people are expected to participate this year

Sarah Kaufman is the Assistant Director for Technology Programming, NYU Rudin Center for Transportation; Jeff Ferzoco, the owner of linepointpath, is an information, mapping and experience designer living in New York City. 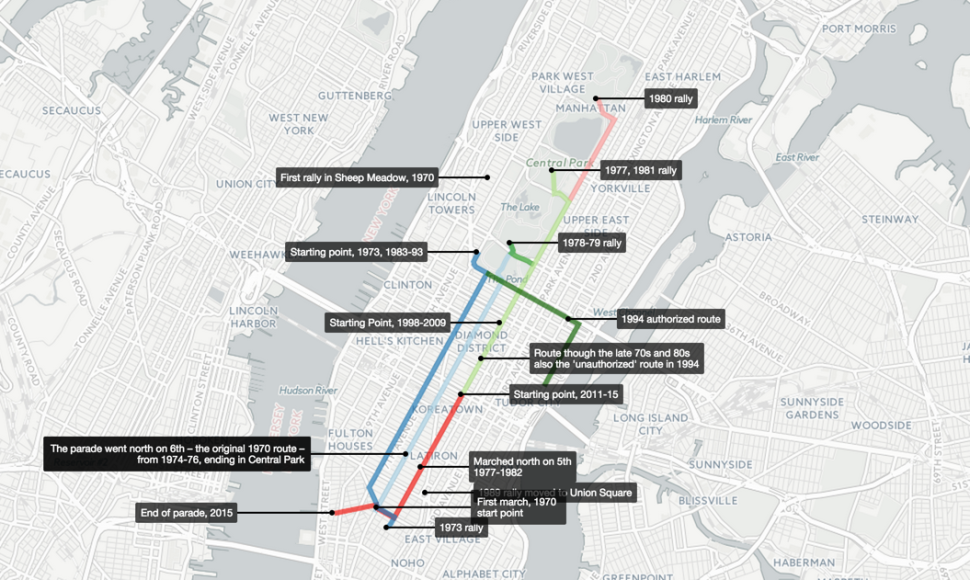