In May, ISIS militants overtook one of Syria’s most significant cultural sites when they entered the ruins of Palmyra. Now, the siege has grown more tense as groups monitoring the site report that land mines have been planted around the city.

Palmyra is designated a UNESCO World Heritage Site, and dates to the second millennium BCE. Activists from the Syrian Observatory for Human Rights have not been able to confirm whether the group has placed the bombs as a plan to destroy Palmyra or further secure it from Syrian military forces. The BBC reports that airstrikes have been launched in residential areas of Palmyra (parts of the city is still occupied by civilians) over the past three days, killing 11 people.

“The city is a hostage in their hands, the situation is dangerous,” Syria’s head of antiquities Maamoon Abdulkarim told Reuters.

ISIS is already responsible for the destruction of cultural heritage sites in Iraq, including the bombing of the Al-Qubba Husseiniya mosque in Mosul, and defacement of statues and artifacts in Nimrud and Hatra. 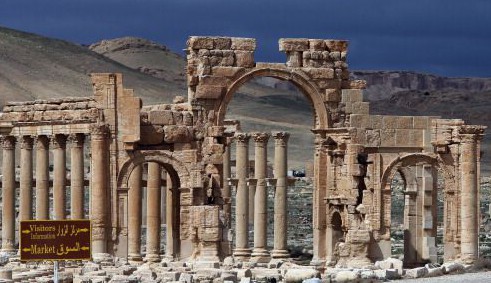