It was two years ago this month that the word “derp” entered our political discourse in full force. It all started when Josh Barro—then at Business Insider, now at the New York Times—used the term to describe the conservative pundit Erick Erickson. The liberal columnist Paul Krugman then picked up on it in a blog post for the Times called “Moral Derpitude.” Since then, Mr. Krugman has deployed the term—or some permutation thereof, including the cringe-worthy “derpy” and “Derpistan”—around 80 times, both in his print column and on his blog.

Today, as if Mr. Krugman has inside him some deep connection to a circadian rhythm of derp, he took it upon himself to define the word—in sync, almost to the day, with when he first used it. What exactly does it mean? As Mr. Krugman puts it, in a piece called “Fighting the Derp,” “it’s useful shorthand for an all-too-obvious feature of the modern intellectual landscape: people who keep saying the same thing no matter how much evidence accumulates that it’s completely wrong.”

Well, sure. But it’s also a pretty uncreative word to ascribe to your ideological opponents. I’m all for playfulness, but given that Mr. Krugman is still defining derp two years on, it feels safe to say that it isn’t worth relying on. It’s about time Mr. Krugman and his derp-using colleagues stopped using the term, despite that Mr. Barro argued it was here to stay when he first introduced it to the internet punditocracy. (It’s worth pointing out, too, that Mr. Barro hasn’t used it since he joined the Times’ Upshot team last year.)

According to Google Trends, derp has been falling out of fashion since 2012, though those who make their livings writing about politics and economics and other important issues that might require a word more complex than derp are still using the term. Last week, for instance, Josh Marshall wrote an essay on Laura Kipnis’ Title IX investigation that was cogent and well argued. But he used derp—twice!—to describe the morass of invective and vitriol and vituperation that is sexual politics on today’s campuses, which just seems frivolous and unthoughtful and vague and kind of lazy.

“[W]hen universities start making their own way into the derp by enforcing federal laws according to its dictates,” Mr. Marshall wrote, “then you’re on to another kind of situation.” Even in context, the quote doesn’t make sense, unless you are attuned to the pundit’s vernacular, which you presumably are not—and shouldn’t have to be.

The derp partisans will say that I am misunderstanding the term. And maybe I am. But you don’t need to get it to feel that it is a pretty obtuse identifier.

Back in June of 2013, Noah Smith tried to define derp in terms of Bayesian probability. “‘[D]erp’ is a unique and useful English word,” he concluded. “Let’s keep using it.” While I appreciate a smart take on a dumb topic—and vice versa—this takes it too far. Bayesian probability? Get real. Derp is a word—if we may call it that; it’s more like onomatopoeia—that first appeared in the film BASEketball in 1998, according to Know Your Meme. And it certainly didn’t exist at that time to describe seemingly close-minded people.

Maybe Mr. Krugman could just use an English word that actually exists. (“Intransigence,” which he likes to use, comes to mind.) I’m not arguing that Mr. Krugman has to stop using the term, of course—I wouldn’t try to police anyone’s language. Gawker banned the term—along with “OMG” and “massive,” among others— from its headlines last year, which seems extreme. (That said, Max Read wrote a pretty solid takedown of derp when the Great ‘Derp’ Debate was raging in June of 2013.)

It is Mr. Krugman’s prerogative as an opinion columnist for the New York Times—a Nobel Prize-winning one, no less!—to say whatever he wants about those he disagrees with, as long as he doesn’t resort to libel or slander. I’m just hoping for a little more creativity and variety, and I’m not alone. As Jen Doll argued in an eloquent, anti-derp rant two years ago called “‘Derp’ Is a Waste of Internet”—which makes me feel kind of guilty for bringing it up again—the word itself is anti-intellectual. Those who insist on using it are clubby and insular and narrow-minded. They are, in a word, derpy. 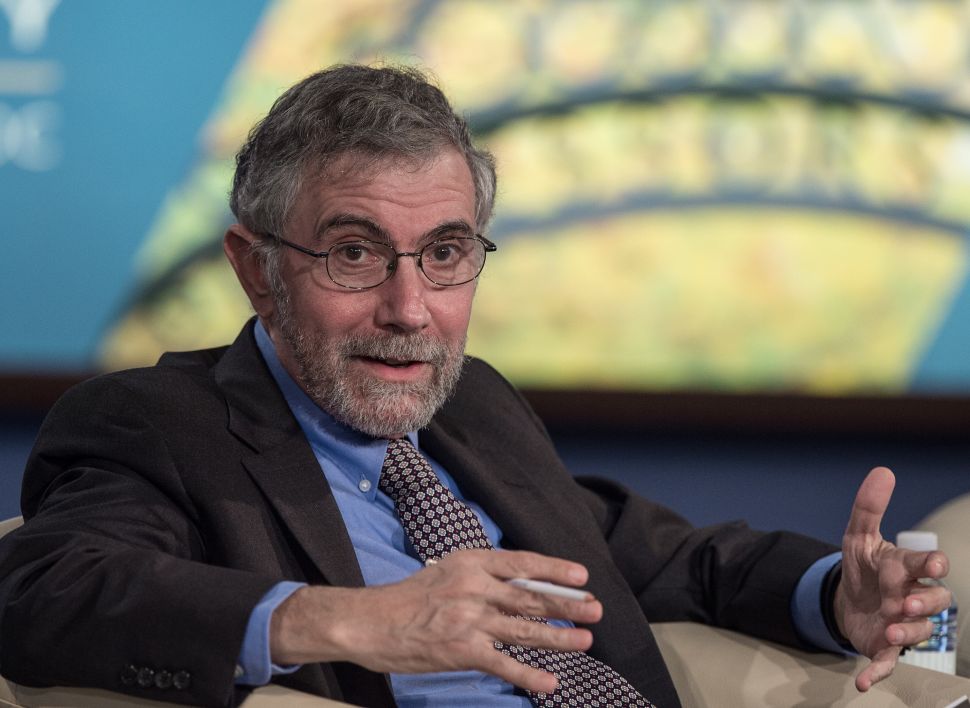