The Confederate flag was important to Dylann Roof, the (alleged) racist mass murderer of nine African-Americans in a historic black Charleston, S.C. church this week. His license plate displayed the rebel flag of the Civil War. He grew up in South Carolina, which proudly flies that battle flag at the State Capitol.

And Mr. Roof was true to the colors of the Stars-and-Bars. He believed in the inferiority of black people, who were employed mostly as slaves by South Carolina and other states in the South when they started a bloody revolution in 1861 to protect their “States’ Rights” to enslave other human beings.

There is no need to respect a symbol that is as evil and vicious to African-Americans as the Nazi swastika flag is to Jews.

Although the Confederate states lost, they were never punished enough and this allowed white attitudes of racial superiority to flourish in the South, even today, 150 years after that war. The flying of the flag is a purposeful affront not only to African-Americans but also to humanity in general.

South Carolina will never willingly take down the flag; the time has come for opponents to exercise their First Amendment right to free speech and burn the Confederate flag—at the state capitol in South Carolina, in front of the White House, in front of Fox News Channel or maybe even outside the Grand Ole Opry.

Don’t burn it in a way that can cause harm. Make sure people are not in the vicinity and check the direction of the wind. Keep a fire extinguisher near in case a grass fire accidentally starts. Don’t use too much flammable liquid to start it.

Of course, burning the Confederate flag would be disrespectful. That is exactly the point.

There is no need to respect a symbol that is as evil and vicious to African-Americans as the Nazi swastika flag is to Jews. In fact, it is important to actively disrespect the banner that represents a pure form of human evil.

The display of the Confederate flag—anywhere—is a non-verbal statement of race hate. Its burning would be a non-verbal response to its crude attitude. You’re sure not going to change their attitudes with sweet reason. Fight their figurative fire with the real thing.

People who still believe in the principles of the “Lost Cause” need to be educated about how normal people feel about their insurrection. We are happy that Abraham Lincoln and the Union army smashed a society based on cruel exploitation, rape and sadism.

We resent how your ancestors insisted on founding our nation on the Original Sin of slavery and how the poison of racism has permeated all 50 states, to some degree or another, to this very day, even with a black president in the White House.

But few states would have the gall to flap the banner of that inhuman behavior above the descendants of those who suffered and died in captivity. There’s no need to debate the Confederate flag issue anymore. In honor of Dylann Roof, it’s time to burn, baby, burn.

Joe Lapointe spent 20 years as a sports reporter for The New York Times and worked as a segment producer for Countdown With Keith Olbermann. Recently, he’s taught journalism at New York University, Rutgers and Long Island University-Brooklyn. Follow him on Twitter @joelapointe. 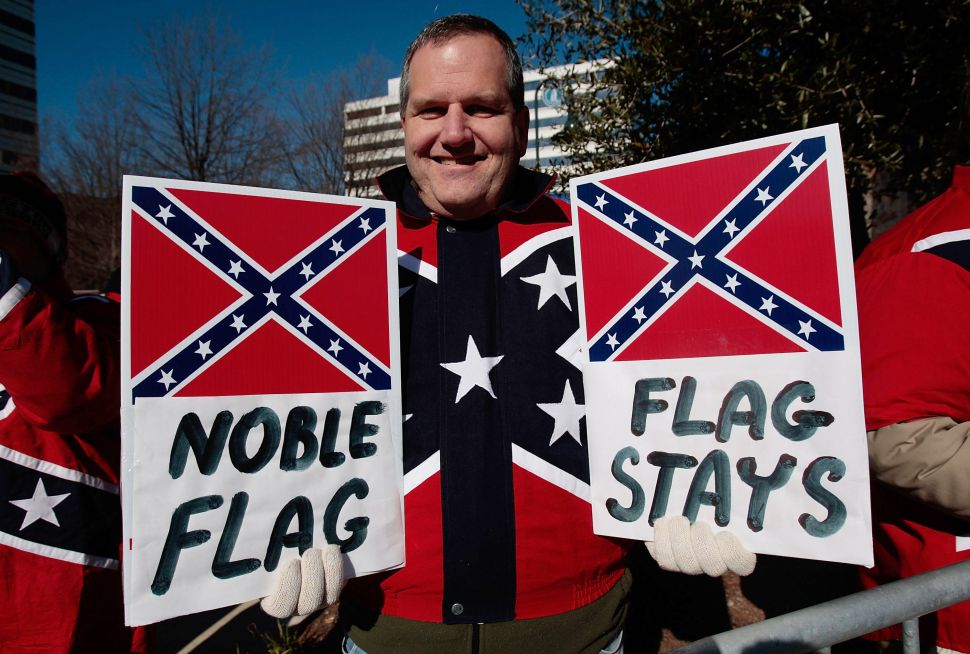