Spend some time in the New York literary scene, and you somehow just end up knowing the writer Jami Attenberg. She’ll invite you to a reading at the Williamsburg loft where she has lived since 2002. She’s often celebrating the publication of another book (she’s on her fifth in nine years) and very active on social media. She’s also one of those people who always remembers you. Meet her once, and you have a book party friend for life.

When the Observer met up with Ms. Attenberg and her pug, Sidney, outside of a coffee shop in Williamsburg on a recent Monday morning, she had just run into Maris Kreizman, the author of a popular literary blog who runs publishing projects at Kickstarter. Ms. Attenberg seemed more excited about the fact that Ms. Kreizman was scheduled to adopt a puppy later that day than the positive review her most recent novel, Saint Mazie (Grand Central Publishing), had received in the forthcoming New York Times Book Review.

Saint Mazie is a fictionalized account of the real-life proprietor of the Venice, a movie theater on the Bowery. Mazie Phillips Gordon, who was immortalized by the legendary New Yorker writer Joseph Mitchell in 1940, was a feisty ticket taker who distributed soap, money and food to Bowery bums during the Depression.

She continued researching the quintessential New York character and found a Times article that said that Mazie was retiring from the theater to write her memoirs. But if she ever did write it, it was lost to history.

“I just would have love to have read that,” Ms. Attenberg said. “Immediately, I just thought, ‘That’s the book I want to write next.’ I loved her, I loved the way she talked, I loved how unconventional she was, I felt connected to her, I admired her for her charitable efforts. She felt like a piece of New York to me that I didn’t want people to forget about.”

Of course, the changing city is one of New Yorkers’ favorite subjects; neither Ms. Attenberg nor myself are immune to the topic. As we walked toward the dog run, we talked about the spread of condos and what it means for the neighborhood.

The conversation was straight out of Saint Mazie:

“So we walked downtown, through Park Row, past City Hall, down Broadway. We talked about all the money in this town lately, more than usual it seemed. Everyone’s so giddy but it can’t last. The city’s pregnant with hope, but only that. New construction everywhere we looked. It’s made of air, this wealth. It’s not real,” Ms. Attenberg wrote.

That Mazie’s observations echo many of our own is not exactly surprising, of course. Ms. Attenberg mixed research with her own experience, and the novel is written in the style of an oral history interspersed with entries from Mazie’s diary and snippets of the mythical memoir.

“There was almost no information on her, just a couple articles,” Ms. Attenberg explained. “I really wanted to interview people about her. But of course, she’s been dead for 51 years.” Soon Ms. Attenberg realized she could create whatever she wanted, including interviews with fictional characters, allowing Mazie’s voice to come through.

The format represents a stylistic departure from Ms. Attenberg’s previous books. The Middlesteins, for example, which came out in 2012, was a more straightforward chronicle of a Jewish family in the Midwest. That book received a good deal of acclaim, but Ms. Attenberg wasn’t tempted to take a break. “I write really fast. I can write a first draft in three to six months,” Ms. Attenberg explained. “I don’t have anything else to do.”

Still, she said that she might slow down before starting her next book.

In the meantime, Ms. Attenberg was getting ready for her book launch that evening at McNally Jackson (coincidentally, it was the 51st anniversary of Mazie’s death). We told Ms. Attenberg we would see her later—and, of course, we’d love to come to a reading on her roof later in the summer. 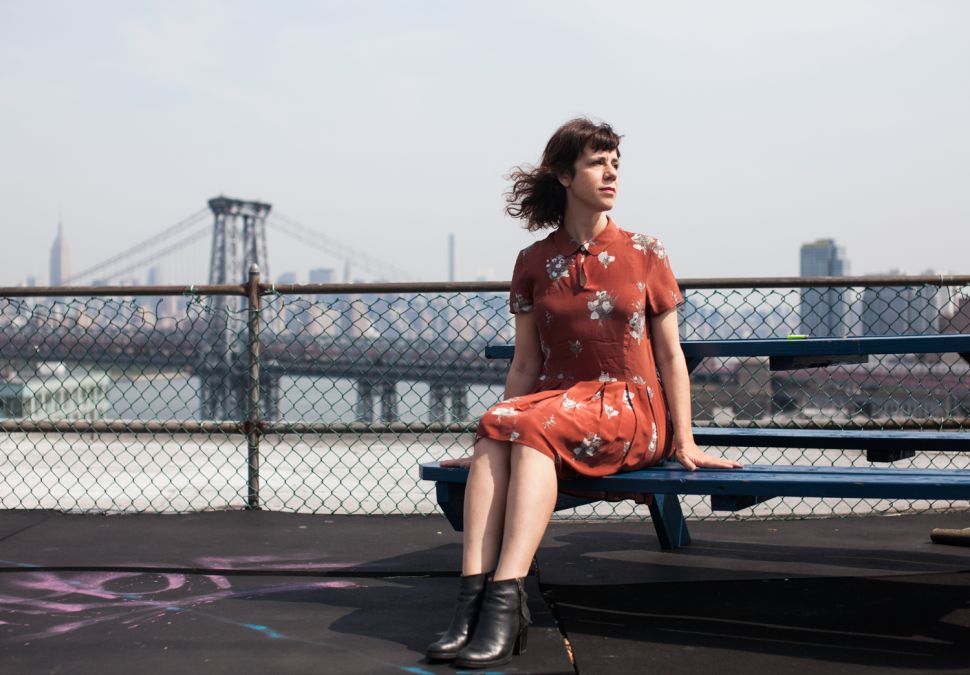