Today, Jeb Bush officially announces his candidacy for President of the United States. In recent weeks, there has been a plethora of columns dealing with the operational problems of the formative stages of his candidacy. Specifically, these articles have focused on the changes in the management of his campaign and Super PAC and the fact that he had not yet opened a commanding lead over the other GOP prospective presidential candidates.

All this media coverage misses the most significant development in Jeb’s campaign thus far: His recent triumphal tour of Europe. On this mission, Jeb was accorded the same recognition and respect given to a visiting President of the United States. This contrasts sharply with the recent foreign trips of other prospective GOP candidates, who were perceived by their European hosts and audiences as being gaffe prone and lacking knowledge of basic foreign policy issues.

The reason for the respect and favorable treatment given to Jeb was not just his mastery of foreign policy issues. Lindsay Graham and Ted Cruz also have a broad and deep knowledge of international and domestic issues of other nations. Yet both Graham and Cruz fail to project the quality Jeb has in great abundance: Presidential gravitas.

“Gravitas” is defined as “dignity, seriousness, or solemnity of manner.” Jeb has a major advantage over all the candidates of both parties in gravitas.

Gravitas was a quality that Jeb refined during his highly successful administration as governor of Florida. In fact, of all the governors or former governors seeking the 2016 GOP presidential nomination, Jeb has had by far the most successful administration in all respects, including economic development, educational reform, conservative judiciary appointments, and adherence to high ethical standards. Thus, when the GOP presidential candidates gather for the first debate, Jeb’s combination of meaningful executive accomplishment and gravitas will result in his stature far exceeding that of his rivals.

Voters in primaries of both presidential parties display a significant tendency to vote for the candidate with the most presidential gravitas. They can find this quality in great abundance in Jeb Bush. They cannot find any presidential gravitas at all in presidential candidates who demonstrate anti-academia philistinism by asserting that former college professors should not be elected President of the United States. Such candidates are reminiscent of the late former Vice President Spiro Agnew, who in the 1968 campaign referred to college professors as “pointy headed intellectuals.” GOP primary voters will not find gravitas in a candidate symbolizing Agnew Redux.

The other factor enhancing Jeb’s gravitas as compared to that of the rest of the field is his refusal to engage in obsequious changing of positions in order to shift with the fickle winds of public opinion. Except for Ohio Governor John Kasich, the other candidates, particularly those currently serving as governors, are changing their positions on Common Core and immigration so rapidly and completely that they seem to be in a contest to win the title of Pander Bear, a designation bestowed on Bill Clinton by the late former Massachusetts U.S. Senator Paul Tsongas in the 1992 Democratic primaries.

The irony is that internal GOP polls actually suggest that Jeb will not at all be damaged by his stance on immigration, which combines strong border control with a pathway for citizenship for immigrants who have established residence here already. Furthermore, Jeb’s adherence to principle on the Common Core issue will provide him an opportunity to remind Republican voters that the GOP has for decades embraced rigorous standards in education. All things considered, Jeb’s refusal to abandon his core beliefs will further widen the gravitas gap between him and his pandering opponents.

Prediction: Gravitas will be a key factor that helps enable Jeb to wrap up the GOP presidential nomination relatively early by scoring breakthrough victories in New Hampshire and then in the Florida winner-take-all primary. Then, the focus will shift to the issue of who would be his best running mate: New Hampshire U. S. Senator Kelly Ayotte or John Kasich. He will then face a Democratic ticket of Hillary Clinton and her running mate, Virginia U.S. Senator Tim Kaine in the November 2016 general election. Stay tuned. 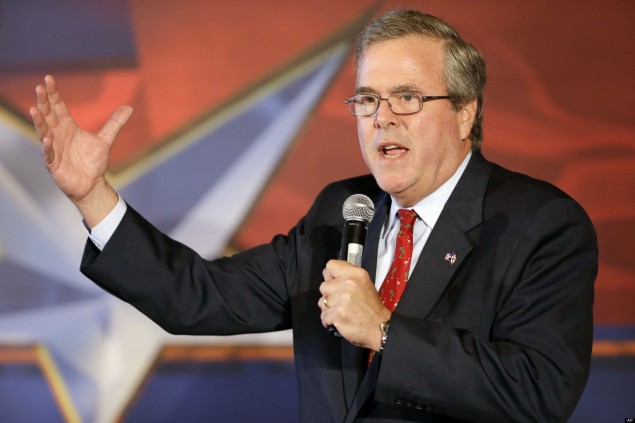