Clocking in at 80 minutes without an annoying intermission, a new Broadway farce called An Act of God is my kind of show. Of course it’s a very fitfully written (by David Javerbaum) and unevenly performed (by whining, eye-rolling TV sitcom personality Jim Parsons) 80 minutes, but still. You’re out of there in time for cocktails.

Considering its decadent history, Studio 54 is an ironic setting for a comedy about God, the Bible and all things divinely inspired, but in the new age of allegedly enlightened theater where anything goes (and everything does), wonders never cease. Along with barbs that strike a number of devout members of the audience as offensive, sacrilegious insults, there is some genuinely funny stuff, too. Flying aloft on curdled puffs of Heavenly hash, God announces Himself right off as a refugee from that god awful Big Bang Theory, the most moronic TV series since My Mother the Car, wearing a white church choir robe, black pants and flaming red tennis shoes.

The joke is he’s God as Every Man, including misfits and misfires of both genders and a few not declared yet. Television appeals, which explains the success of Larry David, Kelsey Grammar and now Mr. Parsons, and the audience, which does not look like Broadway veterans, acts like it has never seen anything else. They laugh when God says, “I’ve grown weary of the Ten Commandments, the way Don McLean has grown weary of ‘American Pie,’ ” but hesitate when He gives us a whole new Top Ten that includes “Thou Shalt Not Believe In Me” (“I mean in the way Thou believes in the Chicago Cubs”).

This God forgives gays but not Jews. When he was bored enough to invent Adam in 4024 B.C., he also invented a naked playmate named Steve. He made Adam and Steve the same gender so they could not breed and spend more time on their gardening. In his ultimate wisdom, God explains a passage from the Bible that warns “Thou shalt not lie with a man as Thee lies with a woman.” Pause. “Well, that’s just good advice.” So Adam lost a rib and Eve lost an apple.

God moves through the Old Testament, somehow getting from Cain and Abel to “Who shot J.R.?” He pauses at Noah (“and his wife Nameless”) long enough to set the record straight. He wants you to know He did not order two of every animal on the ark. It would have been hell on veterinarians and besides, it was in the days before the invention of refrigeration and “Think of the smell!” God also created the heavens and the earth, “including Florida, which I knew even then was going to have the shape of a penis.” God has an answer to every embarrassing question. What about all the evidence of evolution? “I planted it.” When anyone gets testy or annoying, He yells out “You’re lucky I’m God, not Patti Lupone!” It’s the best line in the show, but I don’t think the audience, bused in from Jersey, got it.

Lounging about in his Peck and Peck pajamas, this God bounces off his two sidekicks, the angels Gabriel (Tim Kazurinsky) and Michael (Christopher Fitzgerald, who chews gum and gets one of his wings blown off by a thunderbolt). They cajole, commiserate, ask embarrassing questions He can’t answer like “Why do we die?” and “Why is Donald Trump allowed to roam the universe?” and listen to musings like “The Bible is 100 percent accurate—especially when thrown at close range.” For 80 minutes, the Lord Almighty is a sit-down comic with stand-up punch lines about abortion, pro-life, masturbation, Lot’s wife, Abraham and Matthew McConaughey. He has a special fondness for show business that cracked me up. “People say why did you let the Holocaust happen?” Another pause. “Well, I say no Holocaust, no Cabaret.”

George Burns played God better, but Mr. Parsons is directed by the crafty Joe Mantello on a cartoonish set of round circles like the end credits to the old Looney Tunes cartoons to giveth laughs and taketh them away, faring better onstage than he does on television. (He should stay on Broadway, where mannerisms and limp wrists are just part of the vaudeville routine, and where he already proved himself capable in both the revival of Harvey and Mr. Mantello’s brilliant production of The Normal Heart.) Anemic posture, a grating voice and his wimpy demeanor make for a disarming persona non grata that grows on you. His loopiness in An Act of God is just sacrosanct enough as a summer diversion to make you wonder what God has been smoking. 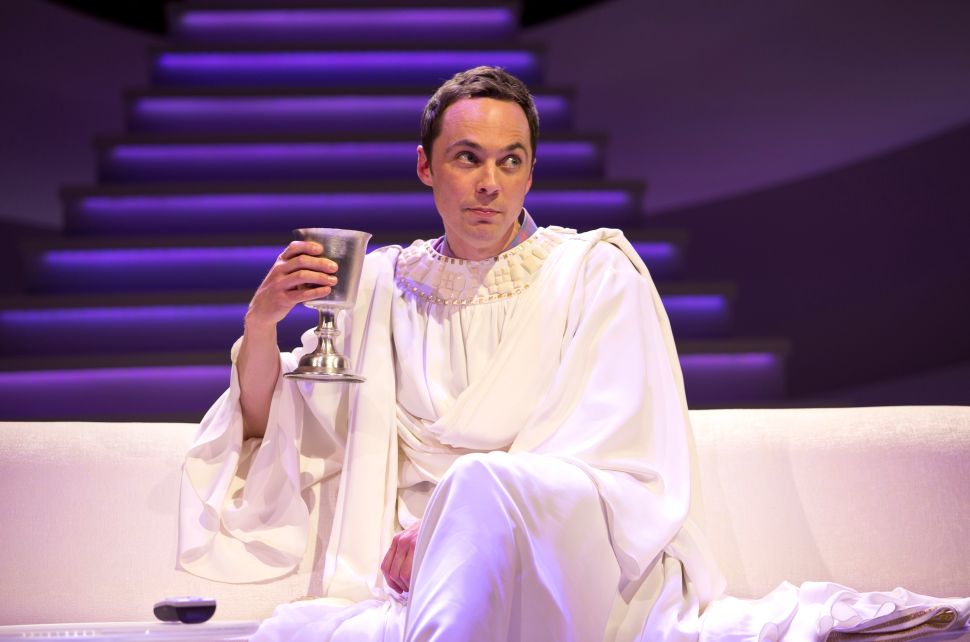