In a storied chess club on the second floor of a Greenwich Village brownstone, the strongest female chess player in history teaches a group of kids her philosophy on the game.

“The biggest challenge is to fulfill your own ideas about yourself,”Judit Polgár, 38, told them. “How you lose matters. Don’t be afraid of losing—it paralyzes you.”

The children, arguably chess prodigies themselves, eagerly looked up at Ms. Polgár as they waited patiently to ask questions. She could have just as easily been talking about life in general, and to those competitive youngsters, she was.

The 40 kids at Marshall Chess Club weren’t there by chance, having been selected among top players from across the Success Academy network of schools to attend a one-week camp at the club. Success Academy students study chess as part of their school curriculum beginning in kindergarten and compete in national tournaments as early as first grade.

Former U.S. Women’s Chess Champion and author of Chess Bitch Jennifer Shahade maintained that many women feel alienated at mixed events, and that separate women’s events are a positive thing.

Ms. Polgár, who refused to compete in the women’s competition throughout her entire career, was nonetheless diplomatic when asked why such a category exists in the first place.

“I guess the argument is that it makes more ladies play chess,” she said. “But we ourselves have to say with confidence that we don’t want that, we want something [at a] much higher level.”

“It was something I was fighting for, and it was natural for me to play against the other guys. The reason I could stay number one among the ladies for 26 years is because my goal was to be at the [top] level among the world challengers, but it doesn’t mean you’re going to stay there forever.”

Ms. Polgár chose to retire last year at the top of her game. In 2014 she started The Judit Polgar Foundation in her native Hungary, teaching her developed approach to strengthen a child’s intellect and problem-solving skills, through chess and other cerebral activities.

“The activities on the chessboard develop logical thinking [within kids]— creativity, acceptance of winning and losing,” Ms. Polgár said. “The most important thing is that they get pleasure out of the study. The rest comes after.”

Even to fellow teachers and coaches, Ms. Polgár’s presence in the Marshall Hall was a momentous occasion.

“I spend a lot of time at this chess club, and lots of world famous players come through,” said Greg Keener, a teacher at Success Academy and manager at the Marshall Club. “But meeting her is special because she has a certain star power.”

The reverence for Ms. Polgár’s celebrity status was palpable in the Marshall Club, its walls decorated with old black and white portraits of the male champions who have played there since it was founded 100 years ago. In the room adjacent to her workshop, an unused chessboard sat encased in glass, embossed with a plaque dedicating it to Bobby Fischer, the infamous chess prodigy, who played a tournament on the board in 1965.

“I met Bobby Fischer in 1993 when he moved to Europe,” Ms. Polgár said. “I have mixed feelings about it. He was an idol, but not a healthy minded man.”

If there is one takeaway from her approach to education, it’s that allowing a child to be proud of themselves is essential to developing a healthy mind. “Give them enough opportunities to grow and show how good they are,” she said. “On the chess board and off the chess board, also.”

Once Ms. Polgár’s workshop began, the kids huddled around a chessboard while she taught them some moves and best practices.

“These are all puzzles I loved very much when I was a kid,” she told them. “These were my favorite.”

The kids and the coaches were equally engaged—Ms. Polgár teaches with a pragmatic but nurturing tone. It’s an empowering lesson about standing up for yourself and using strategy to build confidence.

After one move, a kid asked her why she didn’t use a bishop to block. “I always liked to attack,” she said, matter-of-factly. “It was always my favorite thing.”

“Sometimes you have to sacrifice something,” she told them, as a young player pointed to the board. “Queen, H8. Exactly.” 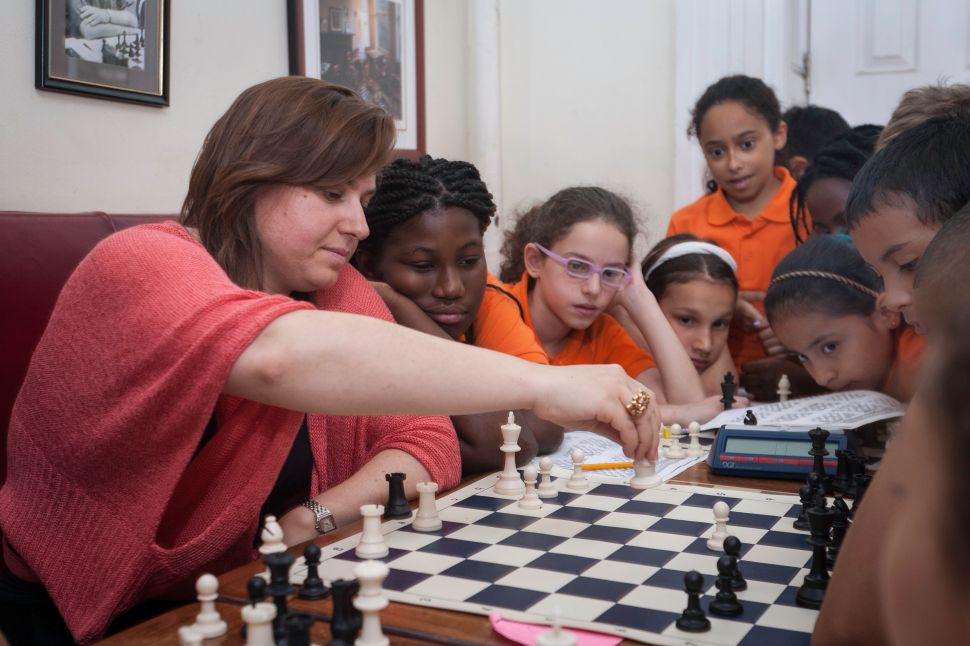