Before the Housing and Urban Development Secretary Julian Castro took the stage at Cooper Union on May 29 to deliver what sounded a lot like a stump speech, it was noted—more than once—that presidents from Lincoln to Obama had addressed the same school.

“These grounds are familiar with generations of leaders,” City Council Speaker Melissa Mark-Viverito told the crowd at the New Museum’s Ideas City conference in her intro of the rising political star. “And we’re joined by such a leader today in Julian Castro.”

Now HUD is a pretty arcane agency. And its leader is not typically among the most high-profile cabinet members (Ronald Reagan famously mistook his HUD secretary, Samuel Pierce, for a visiting mayor at an event for city officials). And yet Mr. Castro—Hispanic, young and scandal-free—is likely on the short-list of vice presidential candidates should former Secretary of State Hillary Clinton (now there’s a high-profile cabinet position) win the Democratic nomination.

After his speech, Mr. Castro struck an aw-shucks-who-me?-tone when the Observer asked about his vice presidential ambitions. Just the tone you’d expect from someone who wants to be vice president.

“I’m trying to do an excellent job at HUD,” is Mr. Castro’s refrain, “because I believe if you do a great job … that’s how you ensure that you have a great future.”

In his keynote, Mr. Castro spoke about ensuring a great future for America’s rising number of urbanites. The theme of the conference was “The Invisible City,” those parts of the metropolis we may miss—such as the undocumented workers who keep it running.

“Do we turn our backs and close our eyes to these issues, or do we open our eyes, open our minds and hearts and pledge to make this moment in history the moment we say, ‘enough is enough’ and pledge to do something about it?” Mr. Castro asked. He recalled his agency’s mission, to provide not just the housing in its name but opportunity: “Our work is about so much more than four walls,” he said. (Of course, there was housing talk, too: He spoke of providing the poor with a home before asking them to show “responsibility” by getting a job has proved beneficial.) Urban issues have been getting short shrift from the federal government, as Mr. Castro told the Observer. The commitment, he fretted, “to dream big for cities has been diminished.”

Would holding an early primary in a state with a big city—New Hampshire and Iowa aren’t exactly known for urban centers—help?

“I haven’t given that much thought,” Mr. Castro said. So he hasn’t been thinking of primaries? “I’m not running for anything,” but he added, “I’m sure it wouldn’t hurt, for sure.”

Appearing younger than 40, because of his baby-bottom-smooth complexion and a passion fruit iced tea, he does not look like an attack dog, the traditional role of veep candidates. But sure, he said, he’d noticed the way The Washington Post characterized his recent defense of Ms. Clinton’s private email account as an audition.

Mr. Castro said there was no party guru, no Peter Boyle character in The Candidate, who had plucked him up from San Antonio and laid out a career path. When it came to the 2012 DNC speech that first provided him a national forum, he said the invite came from Obama campaign manager Jim Messina. “I have no doubt that having given that speech at the convention is part of, a significant part, of my journey in politics, as it has been for so many people,” he said. “But that was one of the moments in life that is more enjoyable to think about in retrospect than it was going through it—because you just don’t want to mess up.”

Is Mr. Castro expecting to have many more high-pressure, don’t-mess-it-up moments on a national stage? “Oh, I don’t know,” he laughed, as a press aide behind him made a neck-slashing gesture to another flack, indicating it was time to wrap up. “I doubt it. I doubt it.”

WOULD CLINTON-WARREN BE A WINNING TICKET? 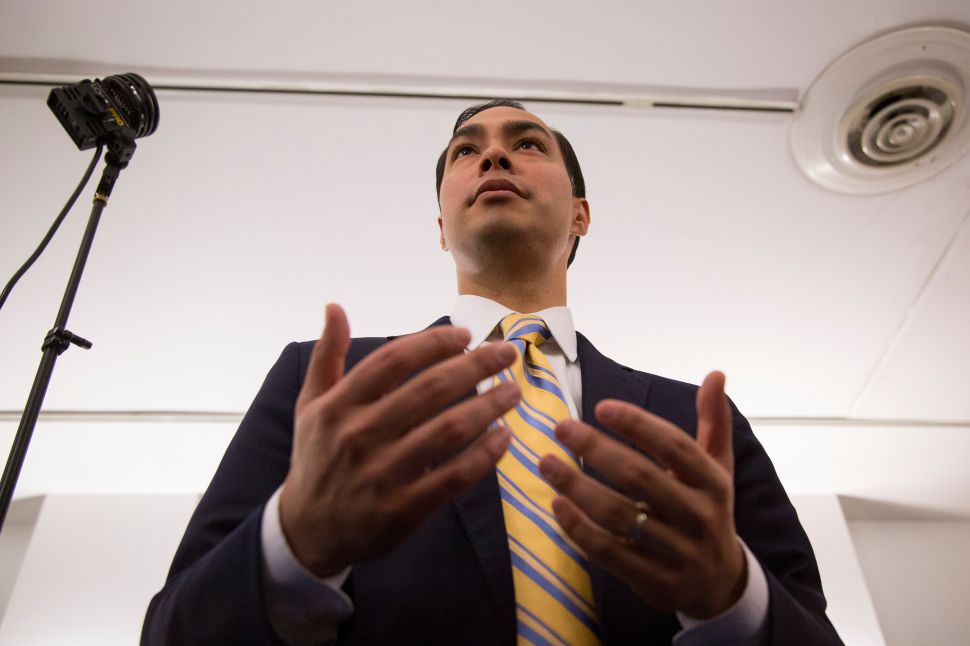