ELIZABETH and UNION – New Jersey’s 20th. This district gave birth to Tony Williams, the angelic voice of the Platters, suckled the likes of Judy Blume and Ray Liotta to its maritime breast, bears the remains of Stephen Crane, contains a raging immigrant American population unequal parts African-American, Puerto Rican, Cuban, Colombian, Irish, Polish, and probably everything else, and each Election Day takes another very hard run at itself, two willful sides of its myriad personalities coming off their stools for the next round.

No one can remember which round it is, they’ve lost count, but there was Union County Sheriff Joe Cryan of Union Twp. on Monday night bunkered in below ground with historic rifles in cases on the walls and a splattering of patches from foreign wars and a grim-faced, rained-on and beer and hot dog imbibing crowd ready to go out tomorrow and pull the levers for Assemblywoman Annette Quijano (D-20) of Elizabeth and Assemblyman Jamel Holley (D-20) of Roselle.

“I know it’s raining,” Cryan told the county committee troops. “I know it sucks. But we’re going to get out there and hit the doors and have a great victory tomorrow night for Annette and Jamel and everyone on column A.” A nearby table bore stack upon stack of Quijano/Holley mailers amid the same leathery faces that four years ago helped drive up Union Twp.’s numbers to get Cryan and his running mates the win. Now Cryan’s the sheriff and backing Holley to retain his old seat. Perhaps in part to make up for the absence of the longtime Irish brand name on the ticket, two realtor groups threw $125,000-worth of late money at the establishment favorites. They also picked up the endorsement of the New Jersey Education Association (NJEA), a fingernails on the chalkboard event for Board of Ed member Monteiro and professional educator Farina.

“We miss you in the Assembly,” Speaker Vincent Prieto (D-32) told Cryan, the Trenton lawmaker turned Union County sheriff as a blue jeans, Rutgers sweatshirt-wearing Cryan draped his arms around old colleagues, Assemblyman Gary Schaer (D-36), Assemblywoman Shavonda Sumter (D-35) and Assemblyman Jerry Green (D-22). In the middle of his own war in his hometown of Plainfield – a fight for two city council seats and county committee control – Green in his role as Union County Democratic Party chairman emceed the program, welcoming Democrat after Democrat to the microphone to bludgeon the opposition.

Elizabeth Councilman Manny Grova made the case thus: “Their candidates supported Chris Christie [in 2009] and some of them served on his transition team,” said the councilman. “They’re not true Democrats.”

In his turn at the front of the room, state Senator Ray Lesniak (D-20) – who possesses significant engine room contacts at the Statehouse harvested over a long political lifetime – gleefully picked up the theme. “We do not want Elizabeth Board of Education-Chris Christie Democrats in Union or anywhere,” he told the crowd.

But it was Clerk Joanne Rajoppi who sounded the sternest warning.

“It’s going to be a low turnout election,” she said with rain pelting the VFW hall at an angle. “We have received 2,000 vote by mail ballots countywide and 1,600 of them were in the 20th District.” Some gasps sounded in the packed room before the clerk spoke. Then she said it. “Many of them – based on who I saw coming in out of the clerk’s office, belong to the B Team,” Rajoppi noted.

On the other side of the district in a realty office adorned with palm tree cutouts sat Rafael Fajardo, who on May 21st survived a nine-hour heart operation, cutting a robo-call for his friends Tony Monteiro of Elizabeth and Giuliano Farina of Union Twp., that pair of Elizabeth Board of Education-organized challengers intent on toppling the county power structure. They want Farina, a teacher, to pull votes in Union, Cryan’s home town. But the real effort here tomorrow is to get Monteiro – who ran in 2011 and won Elizabeth (home to 24,515 or half of the 20th’s 49,710 total Democratic registered voters) while losing district-wide – to pick off one of the two incumbents. In that assembly race four years ago, Cryan received 8,161 votes to Quijano’s 7,977 and Monteiro’s 6,743.

A Cuban immigrant who immersed himself in Board of Ed politics beginning in 1981, Fajardo was in a semi-philosophical mode between phone calls. He considered Cuba. He remembers misbehaving once in class and a priest grabbing him by the ear and twisting him up onto his tiptoes. He hated that priest. Then the communists took over and one day his mother told him it was unusual for the garbage truck to be making its rounds in the middle of the day and when the boy went outside he saw that same priest among others in the vicinity of the garbage truck. The school was closing down, he remembered, and the commies told the people, “We’re taking the garbage out,” meaning the Catholic priests. They drove them out of the country, many of them back to Spain. “I’ll never forget his face,” Fajardo said of the father, whom he never saw again.

Another wave of mail went out today in support of Monteiro and Farina.

That brought in return an objection from the opposition, once again charging the Board of Education with cynically targeting Hispanics (an estimated 32,818 of the district’s 93,356 total registered voters) and missing the broad ethnic spectrum of the district.

In a widely diverse room, Cryan’s team also brought in a Cuban American in Prieto.

“Go do this for Joe Cryan,” the speaker told the troops. “Bring out a big can of whupping ass.”

All this happened, incidentally, on the same day celebrated children’s author Judy Blume – relocated to Florida – returned to the city where she grew up to sign copies of her latest book (titled “In the Unlikely Event”) and participate in a public conversation with Mayor Chris Bollwage in front of a jam-packed City Council chambers on the third floor of City Hall. A stout, longtime ally of Lesniak, Bollwage backs Holley and Quijano and has lent his voice throughout this campaign season to their cause.

“Don’t spoil the ending,” the 77-year old Blume cracked when the mayor revealed that he had finished Blume’s novel, set in Elizabeth, just last night.

Bollwage asked Blume if she recalls writing poetry as a child.

“No,” she growled. “They were melodramas.”

The author recalled the airplane crashes of 1951-1952 in her home town buried deep within her memory, too deep to summon until five years ago, when she began writing the book. Lesniak lived near where one of those crashes occurred.

“I can remember meetings in the city council chamber where people demanded the closing of Newark Airport because of those crashes,” said Blume. “Angry meetings.”

“Yeah,” Bollwage cracked, “we’ve had those.”

The night ended in the VFW hall, with the organization otherwise known as Cryan country and Lesniak and Green all finally handing off to the candidates themselves, first Holley and then Quijano. They didn’t always agree, the assemblyman admitted, alluding to campaign tactics rumored to have put them at odds this cycle, cross currents submerged by common crisis and cause.

“I was not supposed to be here,” said Holley, the former mayor of Roselle. “It’s not about you or me, it’s about us.”

He knows struggle, he said. So does Lesniak, he added. “They want to fight with him, they should have learned by now,” the assemblyman said of Fajardo and his organization, beat up by the school lunch scandal, which in fact, according to members, removed Christie as a functioning ally at the state level.

Microphone in hand at last for the finish, Quijano was the daughter of a single mom growing up in Elizabeth.

She knows struggle, she said.

They were in one, Holley like Green before him, the chairman said, and like the people in the room, who could count on reps in Trenton who know what’s it like to be in a fight. When Holley was a kid he wore a bow tie and knickers and if anyone messed with him, they had to deal with his grandmother, Green said, and Holley told Freeholder Vernell Wright of Union Twp. that she was just like his grandmother and when Quijano had to sum up this room she confessed to once somewhat fearing out of public shyness when she started in the legislature nearly seven years ago, she picked one word – “Family” – and they were one by the looks of it, with Cryan emitting war cry accompaniment for each speaker; and Fajardo’s and Monteiro’s another one, Fajardo refusing to stay in the hospital after major surgery with Election Day looming, and all of it, a day before the warzone of another legislative contest, added up to social and political mysteries unsustainable beyond New Jersey’s 20th District, in Blume’s case buried for a lifetime until now. 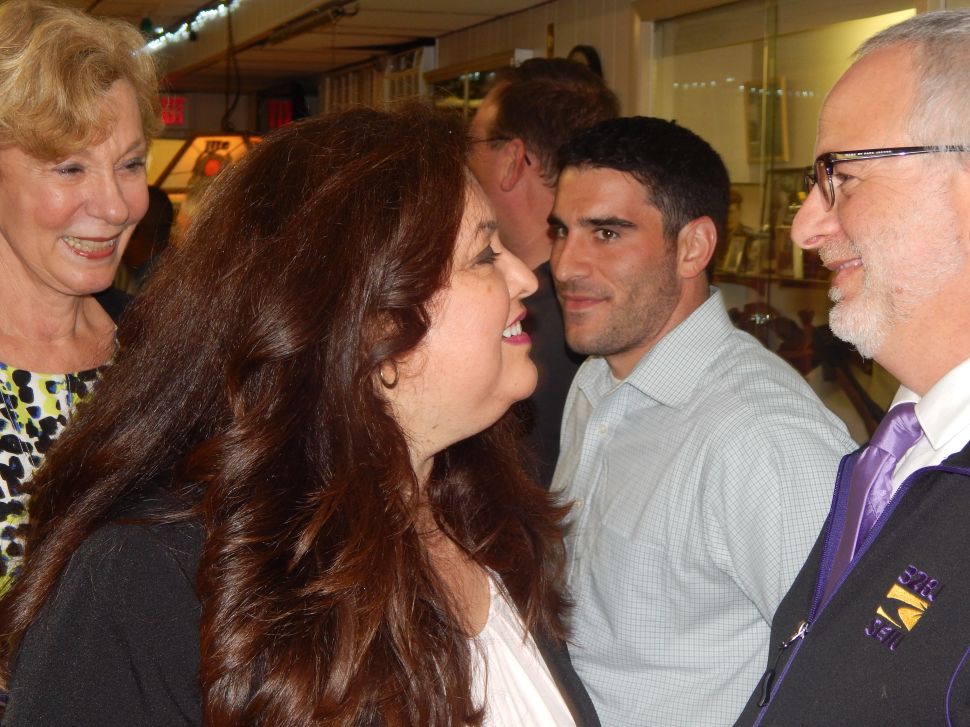