TRENTON — Divided over disagreements about process and likely exacerbated by infighting over a major progressive legislative initiative among Democrats in the Assembly and Senate, Thursday morning’s meeting of the Legislative Services Commission quickly devolved into a shouting match between lawmakers.

The meeting eventually saw the approval of the commission’s January 12, 2015 minutes and the appointment of three new candidates to lead the bi-partisan Office of Legislative Service — but not before the votes were nearly squashed by one Democratic member of the board. State Senator Nia Gill (D-34), who has been feuding bitterly with Assembly leaders over a voting rights bill that has elbowed aside her own, slammed what she called a “fatally and legal flawed” process that led to the selection of OLS’ new hires.

Gill’s complaints were manifold, but centered around objections to the way the commission’s hiring process to fill the new executive positions was conducted. After appointing current OLS Executive Director David Rosen to the position on an interim basis earlier this year, the commission launched a nationwide search for a permanent candidate, including ones for the positions of Counsel and Legislative Budget and Finance Officer. That search included advertising the positions in major metropolitan newspapers, including the New York Times, as well as national legislative service boards.

According to Assembly Speaker Vince Prieto (D-32), who chairs the legislative commission, the search yielded over 130 applications for the three positions. The top candidates were subjected to lengthy interview processes, and then unanimously chosen by the commission’s legislative leaders, including Senate President Steve Sweeney (D-3) and Senate Minority Leader Tom Kean (R-21).

But according to Gill, that process was less smooth than Prieto and Sweeney made it out to be. Earlier this month she wrote a letter to members of the commission arguing that lawmakers were not given enough opportunities to partake in that process, that some resumes had been accepted after their deadlines and that more staff members than agreed upon conducted job interviews.

She also contended that the process wasn’t formally set down and approved on paper at the commission’s January meeting.

“My understanding, and that is why earlier we should talk about this in a meeting before it came to some final vote, but my understanding was that that was a procedure that was agreed upon,” Gill said. “And there is nothing in the minutes to reflect any kind of process, and so I would not be able to support” those minutes.

The complaints sparked heated exchanges between commission members, who shouted over one another as Sweeney motioned for a vote on the candidates after Gill twice tried to move the commission into an executive meeting.

Both of Gill’s motions were quickly shot down by other members on the board.

“We’re talking here about a fair and transparent process that is equal access for everyone,” she said.

Others, including Kean, Sweeney, and Assembly Minority Leader Jon Bramnick (R-21), contended that there was unanimous agreement on the candidates and their qualifications and that they’ve  “never seen a process that was so clean, so straightforward.”

“In a statehouse were partisanship is the rule of the day, this is an area where there’s been no partisanship,” Bramnick said.

“Obviously everybody was collegiate. but collegiality is not at issue here,” Gill shot back, noting that the candidates were not asked to submit writing samples or references during interviewing.

“Please stop showing deference to the other house,” state Senator Joe Kyrillos (R-13) shouted at one point. “We all have valuable schedules.”

Still, Gill wasn’t the only one whose comments stirred controversy surrounding the way that hiring was conducted. Porroni himself, in a letter to members of the commission earlier this month, also questioned the process, saying he “assumed, perhaps wrongly, that I may have been used to validate the process before I absented myself.”

“On the eve of my notice of retirement, I received a letter, asking that I be involved, non voting in the process. But not in an influential capacity. I agreed and sorted through resumes and submitted my recommendations for viable candidates. But the recommendations by committee members were not shared with me.

I assumed, perhaps wrongly, that I might have been used to validate the process before I absented myself.

The process is now in the hands of your staff, instead of yourselves, who have the greatest stake in your membership.

Although my imprimatur has not been sought, my abiding concern for you and OLS leaves me at your service to consult with you if you so desire.” 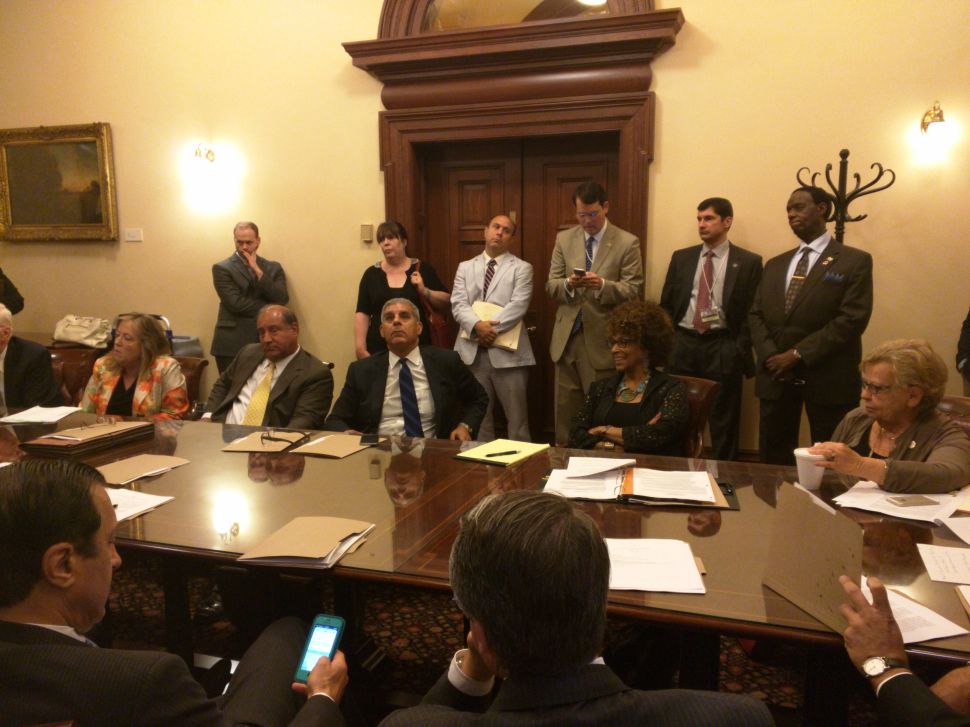