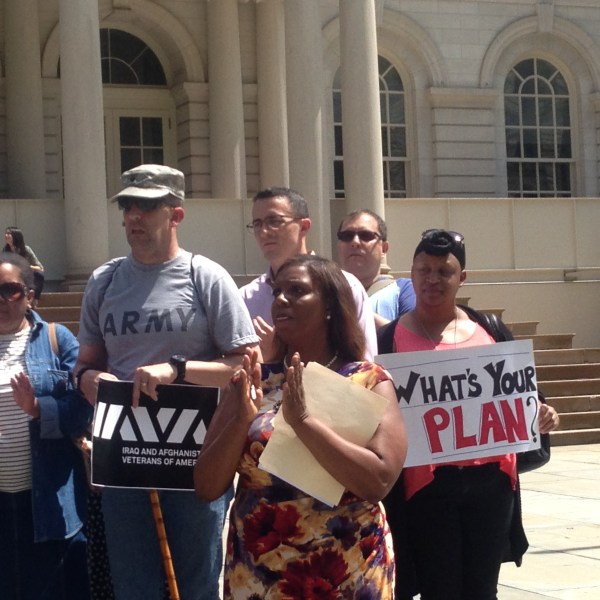 Public Advocate Letitia James today joined groups outside City Hall to demand the creation of a city Department of Veterans Affairs—departing again with Mayor Bill de Blasio, who has resisted calls for an agency solely devoted to former service members.

Ms. James and the Iraq and Afghanistan Veterans of America rallied for the passage of a measure proposed by Councilman Eric Ulrich, a Queens Republican, that would create a new bureau to handle services specifically for the roughly 250,000 vets in the five boroughs. Forty of the Council’s 51 members have signed onto the bill, but it has languished without receiving a floor vote—adding it to a growing list of bills with strong support among council members that have failed to move forward under Speaker Melissa Mark-Viverito, a close de Blasio ally, despite promises of more democratic Council rules reform.

“I really can’t explain why a vote that has the majority of the members of the City Council can’t make it to the floor,” Ms. James told the Observer, also noting that Mr. de Blasio’s father was a veteran of World War II. “We must do everything we can to support our veterans.”

A spokesman for Ms. Mark-Viverito zinged Ms. James—who does not get a vote in the Council but does preside over stated meetings—for not attending a hearing on the bill.

“The City Council is proud to have passed legislation to expand the Veterans Advisory Board and has consistently advocated to increase resources to the Mayor’s Office of Veterans Affairs. After a hearing that the Public Advocate failed to attend, the legislation is going through the normal process,” spokesman Eric Koch said.

Ms. James did submit written testimony for the hearing in question.

Currently, the only branch of government committed exclusively to the needs of former military men and women is the Mayor’s Office of Veterans Affairs. In a letter penned to the Mr. de Blasio, Ms. James noted that MOVA has only five staff members and a budget of just $600,000 a year, most of which goes toward employee salaries and benefits.

The public advocate also pushed for the creation of a fund dedicated to providing housing for disabled veterans.

“It’s important that everyone know that the issue of veterans should not be an issue just on Veterans Day and Memorial Day. It should be an issue we talk about 365 days of the year,” she said. “We sleep easily at night because of the sacrifices our veterans make. It is our responsibility to ensure they sleep easily knowing they are supported and cared for by the City of New York.”

Paul Rieckhoff, co-founder of IAVA, similarly noted that MOVA’s 11-member Veterans Advisory Board has only met once—last month—since Mr. de Blasio has been in office, and that its meeting scheduled for June was abruptly canceled. He argued that the city services available to veterans are disturbingly deficient.

“You don’t have to take our word for it. Go to the city’s veterans website right now. Try to find resources. Try to find something that can help you in need. You’re going to come up empty,” he said.

Mr. de Blasio’s office did not immediately respond to requests for comment. In the past, the mayor has argued that multiple city agencies respond to the needs of veterans, and that creating a separate department for them as a group would lead to bureaucratic inefficiency. His Veterans Affairs Commissioner, retired Brigadier General Loree Sutton, told the Observer earlier this year she welcomes the “energy” of the groups calling for more veterans resources.

Ms. James spent her first year in office largely cheering on the mayor’s progressive initiatives—a sharp break from the combative tack against former Mayor Michael Bloomberg that Mr. de Blasio took when he was public advocate.

She has recently split with the mayor by supporting equal disability pensions for city uniformed employees, and by advocating for free school lunches for all public school students, both proposals Mr. de Blasio views as too expensive.

Updated to note that Ms. James submitted written testimony for the May 6 hearing on veterans legislation. 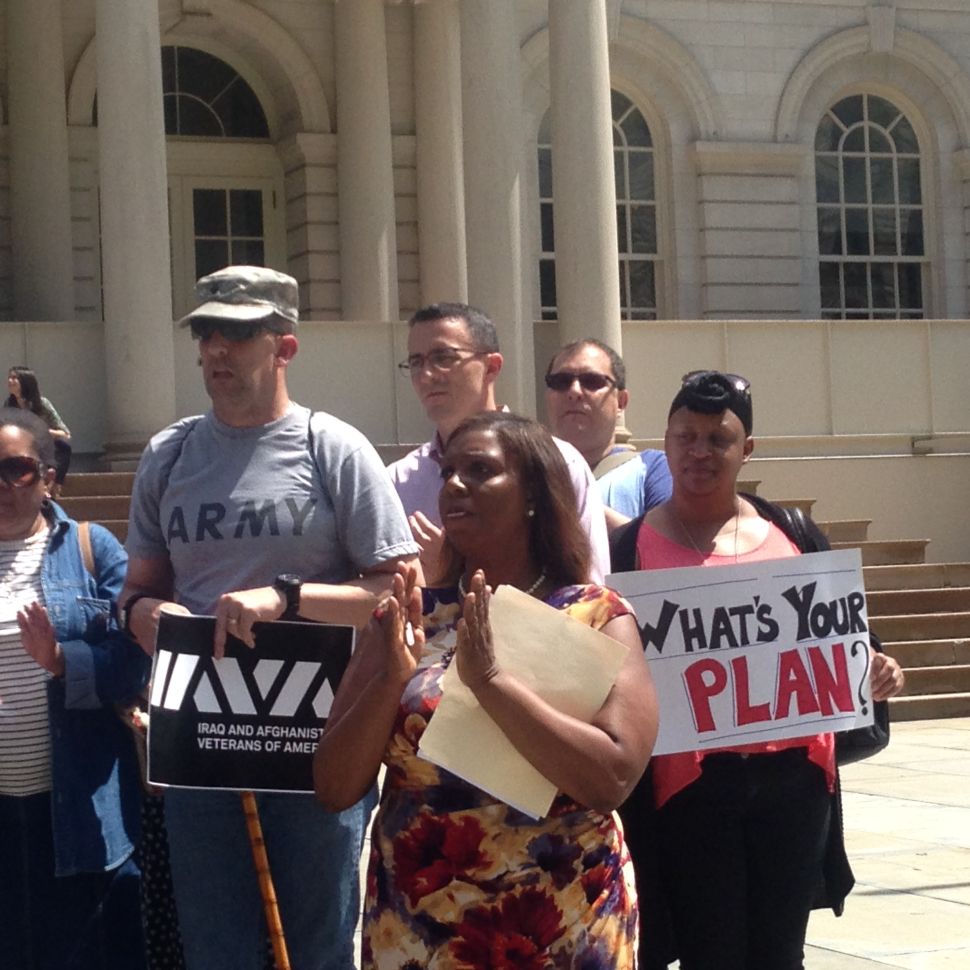