MAPLEWOOD – More than 100 people protested in front of the Maplewood office of state Assemblywoman Mila Jasey (D-27) on Tuesday morning, decrying her support of a proposed bill that they believe hurts the future of charter schools, a critical issue echoed in next-door Newark, across New Jersey and around the nation.

“There isn’t one parent who doesn’t want the best for their child. As parents, we know what’s best for our child, right? And we know that this bill is detrimental to their education,” said Nicole Harris, a Newark resident and a parent of a student at North Star Academy, a public charter school in Newark. “We’re not going to allow Mila Jasey, or anyone else, to tell us what’s best for our kids and render our voices powerless. We have sent thousands of letters to her, we’ve made thousands of phone calls, and she still hasn’t changed her stance on this bill. We’re left no choice but to rally, and to bring the fight to her, and to let her know to get her hands off of our kids’ future. We represent thousands of parents who want choice. Our children deserve a top-notch education, and we won’t stand for anything less. We will not allow this bill to pass.”

The proposed bill, A4351, which was introduced in May, would establish a three-year moratorium on increases in charter school enrollment statewide. This proposed moratorium particularly set off the highly vocal crowd, many of them Newark residents who chanted ‘Hands off our future’ as they vented about charter school options, a critical component of the debate about the future of public education in the state’s largest city, as well as across New Jersey and the nation.

“I want my son, a black male, to succeed in this country. You will not stop me,” said Tawana Emory, of Newark, the mother of a third-grade student at North Star Academy, to loud cheers from the crowd. “I do not come into your backyard and tell you where to educate your child. I own my home. I pay taxes for my son to go to charter school.”

“Who do you think just received an enormous contribution from the [New Jersey Education Association] teachers’ union? Mila Jasey,” added another concerned Newark parent who spoke at the rally. “We all know that charter schools don’t have unions. If you are, or become a great teacher, you get to keep your job. It’s that simple.”

Another Newark parent who has children in the city’s public charter schools, a recent combatant in the city’s tough politics, engaged the crowd at the rally, which spilled into Maplewood’s Valley Street.

“How dare you think you’re going to deny our children an opportunity to change their lives?” said Shavar Jeffries, of Newark, an attorney who unsuccessfully ran against current Mayor Newark Ras Baraka in last year’s highly contentious mayoral race. “A couple of generations ago, there were politicians who stood in the school house door, and they stood in the door to deny opportunities to children of color. They did it for political reasons. We’re dealing with the same thing today. This looks more like a mountain top than Valley Street to me.”

“We’re here to stand against the hypocrisy of those political leaders who want to deny options to families that they crave for themselves and their own children,” Jeffries told PolitickerNJ in a brief interview after his comments.

Jeffries was then asked if Baraka, a former principal of Newark’s Central High School and teachers’ union member who received strong labor backing during his successful mayoral campaign, is part of what Jeffries believes to be hypocrisy by members of New Jersey’s political class.

“I would include anyone who would deny families options that they enjoy for themselves. Anyone who fits that category is who I’m talking about,” Jeffries said. “Parents should make decisions about the educational futures of their children, not politicians.”

But Jasey, sitting in her office after the demonstration dispersed, defended the proposed legislation, of which she is a primary sponsor.

“I don’t question their passion or their purpose, and I don’t question charter schools, per se. My reason for [sponsoring] the bill was to get this conversation going, because we’ve stalled on it,” said Jasey, whose legislative district used to include parts of Newark until after the 2011 redistricting, noted that she met with a group of concerned parents last Friday about the proposed measure. “It’s been 20 years since [New Jersey’s charter school law] was written. We need to look at the original legislation. We need to look at 20 years of experience here in New Jersey, and figure out what have we learned and what can we learn. There is nothing in the [existing] legislation that defines or describes how innovation, best practices, new strategies or approaches are to be shared with regular public schools.”

Newark Public Schools Advisory Board member Rashon Hasan, who attended and spoke at the demonstration, said a measured approach needed to be taken regarding the prognosis of public education in Newark and all of New Jersey, including the future of charter schools.

“If every school is not a quality school, you’re still going to have inequity in the community,” Hasan said. “That’s what we’ve got to fight. We have to come to the table and do what’s best for both sides.”

Newark’s schools, which were placed under state control in 1995, remain troubled, and it is unclear whether the dramatic attempt to jump-start school reform in Newark has had any lasting effect.

The fight over the “One Newark” plan and state legislative debate about the future’s of Newark’ schools continues to ignite controversy in an already fiery political atmosphere. But for Newark resident Crystal Williams-Wortham, the furor over city’s educational future, part of the state and national debate, comes down to one ultimate factor.

“When people make bills like this, they don’t know who they’re affecting,” said Williams-Wortham, 36, who attended the protest. Williams-Wortham has two children in public charter schools in Newark and indicated that she’s “not crazy about” the ‘One Newark’ plan’s effect on Newark neighborhoods. “When I walk my children down Norfolk Street to go to Branch Brook Park, I’m worried about bullies and guns and a whole lot of other dangerous things. These schools offer opportunities that some children would never get. It’s one thing to have your driver drive through it. It’s a whole other thing to stop and talk to people.” 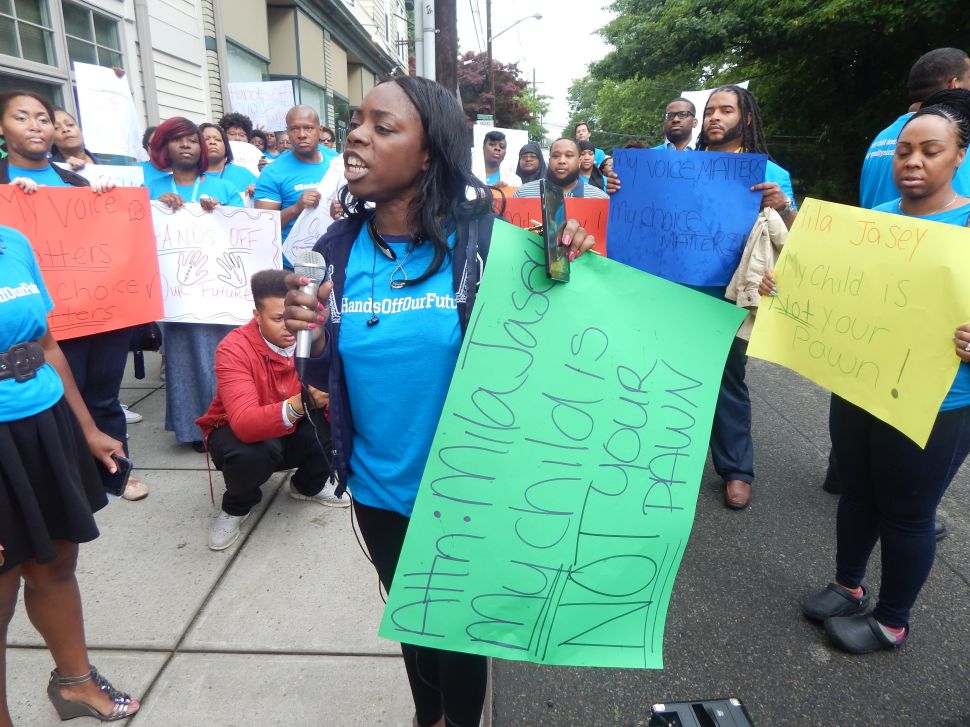